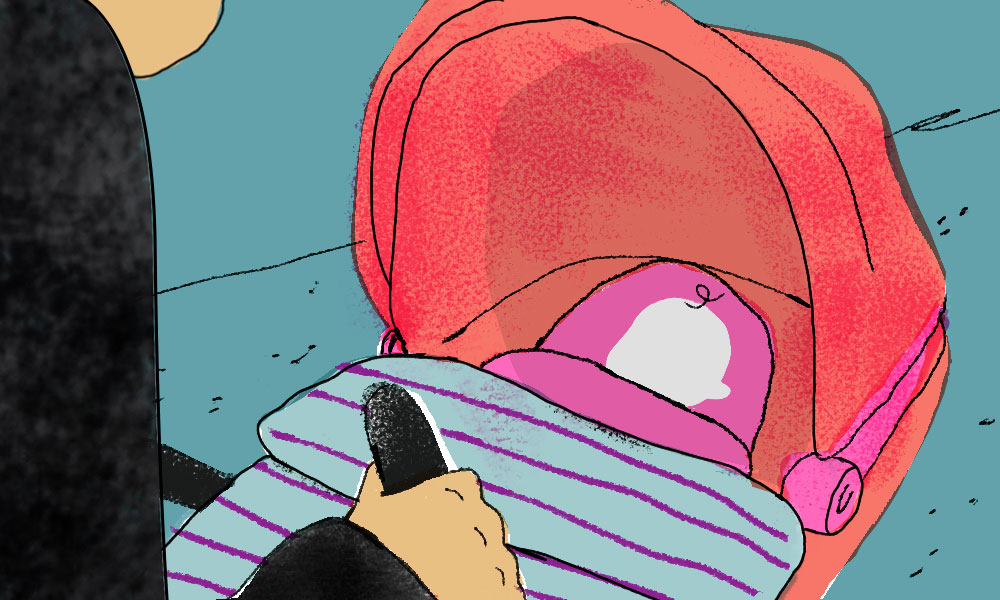 “I was anxious about what to expect, what my new life would be like.” Illustration by (c) Reset Fest Inc, Canada.

Viren Swami was frustrated and lost, trying to figure out how to get out of feeling so bad. Days after his son was born in July 2018, the 39-year-old from Cambridge, U.K., found himself unable to sleep, control his emotions or stop feeling low. “There were days when I just wouldn’t sleep at all,” he told Re:Set. “There were other days when I would struggle to get out of bed, to brush my teeth. I didn’t feel joy, I didn’t feel happiness of any kind.”

The social psychology professor from Anglia Ruskin University was aghast. He was experiencing mood swings before his son was born and struggled to adapt to his wife’s pregnancy. “I was anxious about what to expect, what my new life would be like,” he reflected. “By the time my son was born, I don’t think I felt anything at all…I was completely numb.” Days later, Swami found himself spending too much time at work as he battled self-deprecating thoughts such as his wife and son didn’t really need him. His equation with them started suffering. “I wasn’t able to form any kind of real relationship with my son and I really hated that about myself,” he said. “I kind of almost destroyed every relationship that ever meant anything to me.”

“I was anxious about what to expect, what my new life would be like.”

While Swami spent months trying to recuperate and assumed what he was feeling was nothing beyond baby blues, his wife could sense something was terribly wrong. She urged him to seek help from their general physician which eventually gave them a diagnosis: postnatal depression. “For me, having a health professional say there is something medically wrong with you was a change. It convinced me that I needed to get professional help,” Swami explained. He spent six months attending psychotherapy sessions and decided to join parenting classes.This decision helped him learn practical things he needed to know about being a parent such as the importance of positive encouragement and different types of play that appeal to babies. It enabled him to develop a close relationship with his son. “In early days, I didn’t believe men could get postnatal depression. And that’s such a pervasive attitude,” Swami said. “It makes it much more difficult for men to actually ask for help when they need it.”

Dr. Viren Swami, a social psychology professor based in the U.K., has been vocal about his journey through postnatal depression. Photo courtesy: Viren Swami

Several research studies indicate that postnatal depression in men is a growing, often overlooked concern. According to Dr. Christina Hibbert, an Arizona-based psychologist who often works with parents battling postnatal depression, the condition affects at least 10% of men across the world. Some of its major symptoms include moodiness, irritability, anger, frustration, stress, addictive behaviors, staying too late at work and more. However, most men hesitate to open up and their partners are often the first ones to notice something is not right. “The stigma around mental health struggles is huge in general, but men can struggle with it even more, believing they need to be ‘strong’ and seeing seeking help as a weakness,” Hibbert told Re:Set. “The more we talk about these issues, the more we normalize it, which can help fight this stigma.” Additionally, postnatal depression in men is often not addressed as a real concern and is dismissed; adding to the stigma attached to seeking therapy.

Hibbert believes that educating more parents on postnatal depression and improving awareness can make a huge difference. It’s important to acknowledge that this condition can affect both parents. “We need to help men in general to see that admitting a weakness or challenge doesn’t make you weak,” she added. “In fact, there is great strength in seeing and working to overcome mental health challenges. This is how we improve and grow.”

“The more we talk about these issues, the more we normalize it, which can help fight this stigma.”

Mark Williams, a 45-year-old mental health activist and founder of Fathers Reaching Out, a support group for dads in the U.K., experienced post-traumatic stress disorder (PTSD) after his wife went through a difficult delivery. “The first time I had a panic attack was actually in the labour ward,” Williams told Re:Set. “I thought the baby was going to die.” The painful episode left Williams and his wife, Michelle shaken. Both of them experienced symptoms of postnatal depression. “It was probably the loneliest time in my life because I couldn’t tell anyone,” Williams said.

He took time off work to care for his wife and child and chose to not tell Michelle about his own problems because he was scared of having a negative impact on her health. Years later, Williams had a breakdown. He lost his grandfather to dementia and had to come to terms with his mom’s cancer diagnosis. Professional help and talking to other fathers about his experiences helped him cope. He started Fathers Reaching Out in a bid to help other men going through postnatal depression, devoting his attention to the cause full-time. “We should be asking what the experience was like in the labour ward,” he said. Williams believes that difficult deliveries can often leave parents drained and afraid even after birth; uncertain about what lies ahead in their parenting journey. His charity offers workshops on mental health and focuses on spreading awareness about postnatal depression in the U.K. and beyond.

For Sam (name changed to protect his family’s privacy), an IT professional in his mid-thirties, fatherhood felt like the next step forward. He started discussing the possibility of having kids with his wife. The couple, based in Amsterdam, were used to a certain kind of lifestyle: spending time with friends, attending parties and maintaining an active social life. Sam’s wife spent two years trying to get pregnant, consulting several doctors and looking for solutions. When it was confirmed a baby was on the way, Sam couldn’t help feel uneasy as their habits changed. “I know it sounds pretty shallow. I started feeling like this [a child] would seriously affect my lifestyle, the changes that were happening,” he told Re:Set. “This is when I first started having my depressive episodes.”

Sam decided to talk to a therapist but couldn’t find a connect. He was told what was happening to him was natural and expected. This didn’t sit well with Sam who thinks it’s a toxic approach. “Just man up and take it,” he explained, referring to the prevalent attitude. “It would have been so much better if he [the therapist] somehow explored where those fears come from.” He would also have preferred being reassured and told that it’s OK to be unsure to not want children.

Sam initially listened to the therapist’s advice and ignored his feelings. However, three months into the pregnancy, he started panicking and realized that he was petrified. Things would change. What was his life going to look like in the future?

It’s been a year since he first experienced anxiety. His daughter is now four months old and Sam is actively pursuing therapy and plans to get on medication to feel better. He is still fighting to establish a sense of control and be more positive. Despite his counseling sessions, he believes he’s far from feeling completely OK.

Sam wishes more men would speak up about postnatal depression. His experience with his first therapist left him bitter. For men like Sam, it’s important to see medical professionals and other people treat postnatal depression among fathers as a serious illness. “Everyone knows it’s [being a parent] life-changing but no one knows what it means,” he explained. “What could be the real effects of having children?  People don’t really understand what that means. There are no stories like mine being shared or not enough.”

The Pressure to Plan Fancy Vacations Is Catching up With Indian School Kids
‘Where Are You Taking Us?’ The Struggles of Keeping Children Busy During Summer

‘Just man up:’ Postnatal Depression Among Fathers Is Still Not Taken Seriously