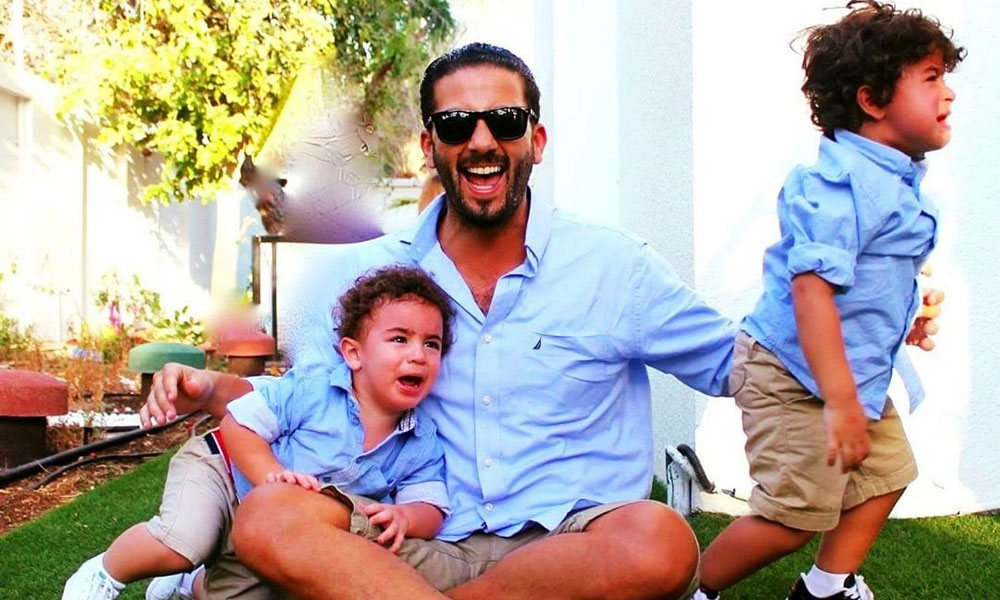 “Daddy, I wanna go to school. I miss studying,” Omar Mneimneh, a curly-haired, energetic kid told his father, Wassim, as they spent time together earlier this month during the summer break. Wassim was both baffled and amused. His kids, Omar, 5 and Karim, 3, are poles apart. “They’re brothers. They’re very close but as of now, they have very different personalities,” Wassim admitted. While Karim is obsessed with dinosaurs, Omar simply wants to add and subtract numbers. Wassim is considering enrolling Omar into a learning-focused camp for the summer. “My son is actually excited for when school starts.”

Born and raised in Lebanon, Wassim moved to Dubai a decade ago. An advertising professional, he also does stand-up comedy and has a hilarious Instagram account dedicated to his sons replete with funny clips. In one of their videos together, Wassim is seen demonstrating how his kids actually react when he travels which is completely at odds with his expectations. “Can I get a hug?” he hilariously pleads as one of his kids shoots back, “No.”

Wassim’s content focuses on light-hearted moments shared with his kids. “Usually, dads find it a bit hectic sometimes [to be] with their kids…because they’re basically dads and in society, moms spend most of the time with their kids,” Wassim told Re:Set. “So I started doing these funny videos in terms of teaching them [his sons] stuff and how to get along with life. I like to bring laughter to my sons. I want my kids to understand how to be sad, how to be happy, how to joke around and how to take a joke.”

The family looks forward to the holidays. While the boys go to summer camps for the first couple of weeks, they head back home to Lebanon after that for around a month. “I don’t want them to spend most of their time in a play area [in a camp or at a daycare center],” Wassim explained. Going to Lebanon gives them a chance to reconnect with their grandparents and their roots. Wassim considers a break from school a good opportunity for his family to bond over activities like basketball, football, swimming and more. “This is the chance. It’s very challenging in a place like Dubai where everyone works,” he explained. “Summer is a way for families to spend more time together.”

“My children have been very lucky…they’re not stressed or lonely.”

Joyce Watts, an entrepreneur based in Melbourne, Australia finds it easier to explore the city’s art and cultural scene during the summer. “My children have been very lucky…they’re not stressed or lonely. During the holidays, they are probably more inclined to express boredom,” Watts told Re:Set. To keep her children entertained, she takes them to take them to the local parks, libraries and jungle gyms. Her kids love rock climbing. Watts is a firm believer in keeping things simple. “Holidays don’t need to be expensive or flashy,” she said. “A lot of joy can come from…the mountains. Doing something essential…going down to the local ice-cream shop, having an ice-cream and riding a bike…I think that it is still really lovely.”

Joyce Watts, an entrepreneur based in Melbourne, Australia, believes that summer activities can be as simple as grabbing ice cream together. Photo courtesy: Joyce Watts

Parents often find it tricky to find the right mix of activities to keep their children occupied during the summer and ensure they’re not perpetually bored. Finances can often take a hit too as parents look for classes and summer camps for their kids. Wassim acknowledged that affordability is definitely a roadblock and he needs to be mindful of his boys’ schedule while he’s away at work.

Dr. Aaron Montgomery, a child and adolescent psychologist, based in California, U.S.A. thinks it’s essential to not obsess over planning everything during the summer holidays. “It is helpful to schedule activities for your child over the summer, but don’t forget to schedule unstructured downtime. There is such a thing as over-scheduling,” he told Re:Set. “Kids need downtime to relax, be creative and engage a different part of the brain; this is healthy.” Montgomery also believes that providing children with new experiences such a visit to the local science center is vital.

“As a single mum, you still have to keep going on the weekends.”

For Sarah Alblooshi, a teacher and photographer based in Ajman, UAE, it’s crucial to keep her daughter busy during the summer. A single mom, Sarah takes Hayah, 4, swimming every weekend and also encourages her to participate in summer events held at her nursery so that she’s not away from her friends during the break. “As a single mum, you still have to keep going on the weekends,” Sarah told Re:Set, adding it’s very difficult to take time off during the summer as a single parent.

She’s observed that as an only child, Hayah is already learning to be independent and actively looks for things she likes to do. “We have a lot of interest in our family in music. Hayah is turning out to be the same! She loves music and she’s quite a strong-headed little girl,” Sarah said. Hayah is also very comfortable around adults and connects with them easily.

One of their main challenges has been the lack of activities in Ajman compared to Dubai and the unforgiving weather during the summer. Living in an apartment and not having access to a backyard for Hayah to play in is also something Sarah frets over. However, they tend to prioritize their time together and visit gaming arcades during their downtime.

Another lesson from the holidays? Limit screen time for the kids and engage in useful activities instead. “I really hate them watching TV,” Wassim acknowledged. “Although, obviously, I’m pretty sure most of the parents put their kids in front of the TV…it’s like a hypnotizing thing.  They get their rest [that way].” He limits Omar and Karim’s screen time during the summer and distracts them through quirky activities like playing with water balloons together. He’s extremely mindful about ensuring that he plans their day well and finds interesting day camps for them until he can get off work. Wassim is familiar with the most important question he gets asked once he’s back home from work during the holidays: “Daddy, where are you taking us?”

‘Just man up:’ Postnatal Depression Among Fathers Is Still Not Taken Seriously
‘A Comparison Game:’ Parents Talk About Social Media’s Impact on Their Mental Health

‘Where Are You Taking Us?’ The Struggles of Keeping Children Busy During Summer