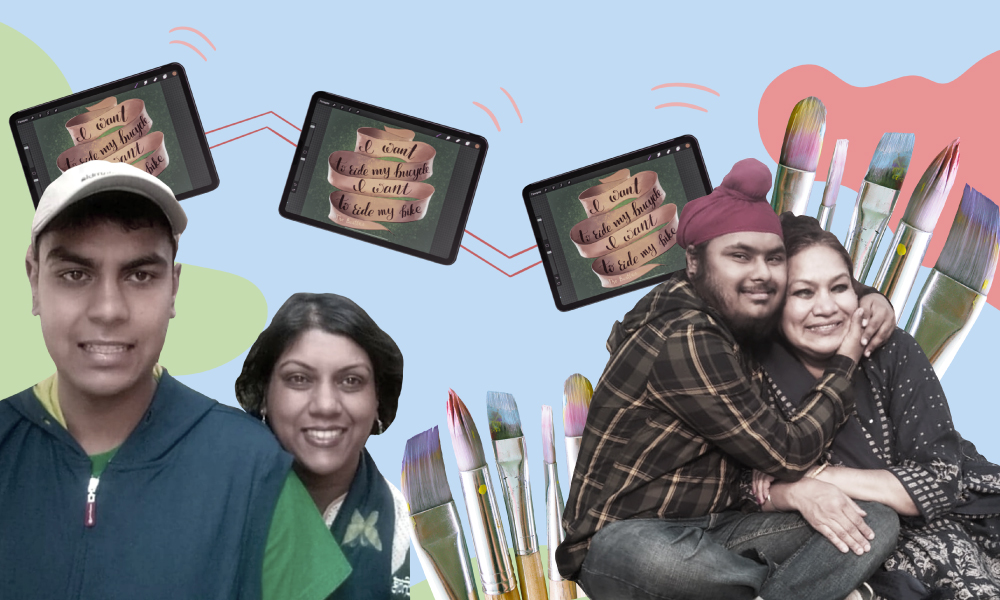 Before COVID-19 brought life to a halt, 23-year-old Bengaluru resident Anshuman Kar would spend seven hours a day at a vocational training center for people with special needs. Being a non-verbal adult living with autism, those computer training classes were his only daily social interaction with the outside world. And with everyone locked inside their homes due to COVID-19, Anshuman’s routine also went for a toss.

“I started looking for classes he could take online, but options for non-verbal children are limited,” Sushmita Kar, Anshuman’s mother, told Re:Set. Up until then, Anshuman had only attended physical classes, with either the teacher coming home, or him going to the center.

“Usually, online classes are better for verbal children,” Kar reflected. “Anshuman expresses himself via typing messages on his iPad so he needs that lag time to respond.”

Anshuman’s father, who had been living outside India for a year, had come home just before lockdown and was working remotely. Seeing both his parents work from home, inspired Anshuman to continue with his own schedule. “He thought these are our classes and meetings, and he should also attend his on the iPad,” Kar said.

“Storytelling has helped [my son] recall an activity and put it in a narrative and connect with other things.”

Kar enrolled Anshuman in an art class in June last year and from a one month trial run, his classes were expanded to include storytelling three times a week.

“They helped because being a child with autism, he has a deficit when it comes to understanding social cues,” Kar said. “We also thought it would improve his listening skills, and also comprehending a narrative.”

Four months into the storytelling sessions, Anshuman is being asked to come up with small illustrations and his own stories. And he’s communicating a lot more. Last month, for example, the family went on a small trip to Mysore and he took some photos on his phone.

“After we came back, I asked him about them, and he made me a sequence of photographs and made a narrative around them,” Kar said. “Like we went up a hill, then we went to get ice cream, then Anshuman made a new friend. Usually children with autism have difficulty in putting a sequence together. But storytelling has helped him recall an activity and put it in a narrative and connect with other things.”

Anshuman hasn’t missed a single class since starting, and before every one of them, Kar sees him put on the Zoom call, arrange his books, his crayons and prepare himself.

“This was quite unthinkable earlier, as we had to physically tell him what to do.”

Of the three classes he attends, one is held by Shivani Dhillon, a special educator and storyteller based out of Chandigarh.

An ex-journalist, Dhillon runs Down Syndrome Federation of India, a support group for children diagnosed with the condition. She started using stories first in her own life when her 10-year-old daughter Shreya wouldn’t get out of their car when they returned home from somewhere.

“Because there is a communication challenge and she has speech impediment, I wasn’t able to address this problem,” she told Re:Set. “And sometimes, we as parents tend to overdo these instructions. Then the child just freezes after the first or second instruction.”

So Dhillon took A4 sheets and made a three page story for Shreya. The first page showed a car similar to theirs and had three people sitting in it, like Dhillon and her two daughters. The second page showed that Shreya was still in the car, but everyone else had gotten out. Dhillon was outside the car with a sad face to show her reaction to Shreya not coming out of the car. And in the third page, Shreya was also out of the car, and all of them had happy faces.

Shreya then started applying the concept, and would get out of the car whenever everyone else would step out.

When the lockdowns were announced last year, Dhillon started making videos of these stories and parents like Kar realized these were helping their children.

“Online therapy became difficult for kids with special needs in lockdown,” Dhillon said. “Speech can be done virtually, but that was also very new as the kids weren’t used to them.”

The first session was held in July for one hour a week with a group of eight. Now it’s up to 60 students attending, still in groups of eight, but who attend multiple sessions a week.

“In addition to teaching them social concepts, helping them engage with others socially, the storytelling classes also helped them get used to technology,” Dhillon told Re:Set.

For 21-year-old Ashnoordeep Singh, a chef with Down syndrome, the language barrier is difficult to comprehend. 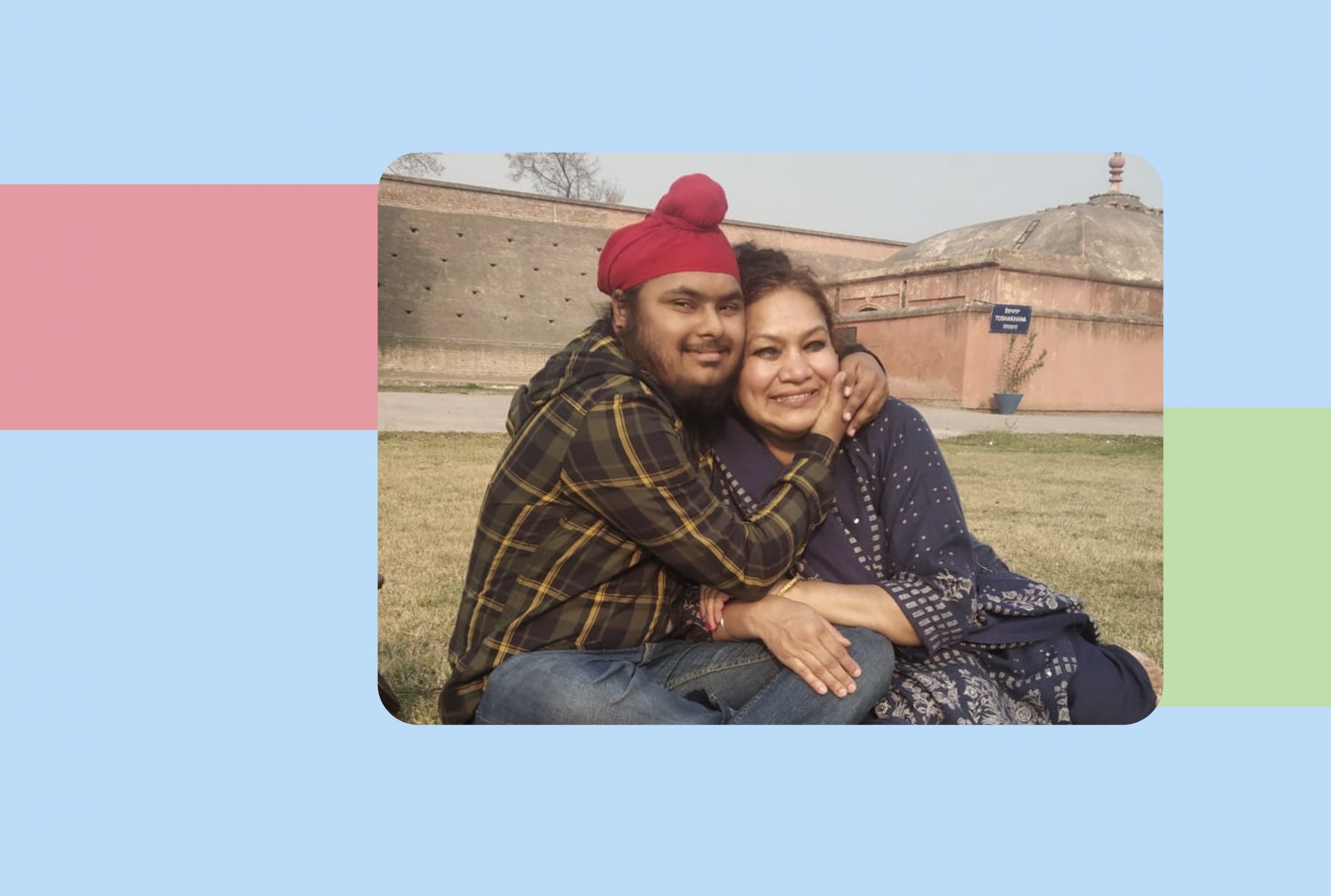 Ashnoordeep has found the classes particularly beneficial and these help him with his overall well-being.

“Sometimes he struggles to interact as a lot of the class is in English and being from Chandigarh, his English isn’t as great, so he struggles to engage like the others,” Kulwant Kaur, his mother, told Re:Set.

The educators have tried to add more Hindi, which has helped Ashnoordeep’s ability to comprehend. Kaur also sits with him and attends the classes, so if he doesn’t understand, she can help fill in the gaps.

She has witnessed the impact of the classes first hand, when one day she got angry at something and Ashnoor remembered from a story that anger was bad. So he told his mother to try yoga, as he’d learned in the classes that it helps.

“This is even more important during COVID-19 because he’s not able to socialize or go out. The classes help him that way,” Kaur said. “The kid sits in one place and interacts with others for an hour and feels entertained. It also helps him relieve anxiety.”

Also read: How Occupational Therapists Are Helping Children with Special Needs During COVID-19

‘Lost Balance in My Life’: How COVID-19 Has Impacted the Mental Health of School Principals
Could Education Hubs for Deaf Children Counter the Challenges Posed by Mainstream Schools?