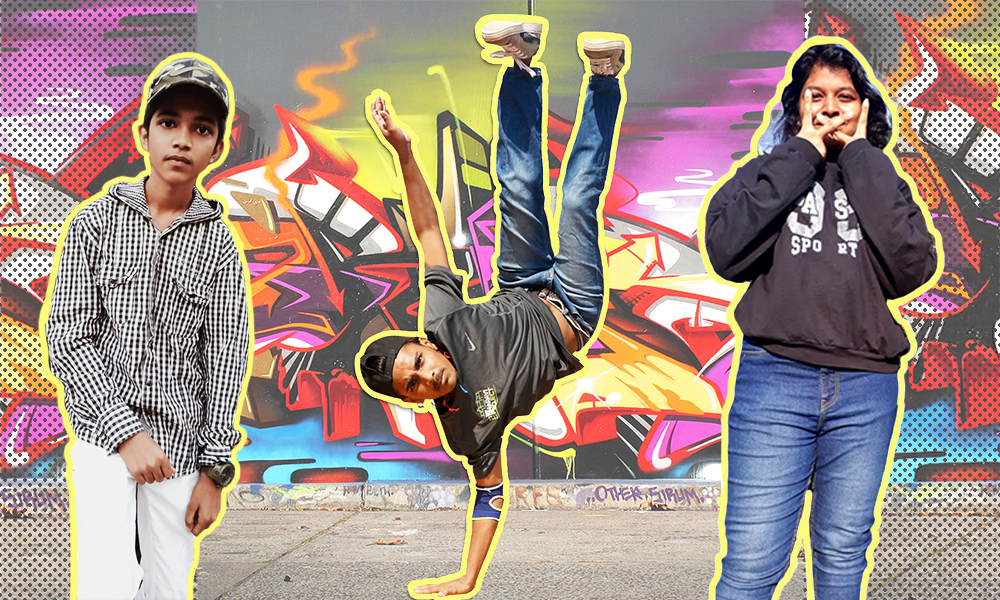 Over a year ago, 16-year-old Afzal Shaikh saw a bunch of guys at a park in Mumbai and was left dazzled. The group was energetically participating in a rap session, replete with powerful lyrics. Shaikh wasn’t intimidated by the group or the novelty of it all. He felt motivated and thought to himself, “I can do this too.”

He worked hard on his material, penning down lyrics and practicing regularly. He found out about local underground artists such as Divine and Naezy and was bowled over by how hardcore their work was; very different from the commercial Bollywood music that he was used to. “I love the vibes around hip-hop and rap which is why I do it,” Shaikh told Re:Set. He raps in Hindi and mainly focuses on his sense of self, his home and the world around him in his work. This month, one of his singles is set to release across India. Shaikh is pumped.

A post shared by The Dharavi Dream Project (@tddp_in)

However, his journey has been full of hurdles. When his parents found out about his passion for rapping last year, they were filled with rage. They decided to move the family back to their village in Chennai, South India. Those were stressful days for the rapper who felt like he was fighting a losing battle. “I started getting demotivated and quit rapping,” he admitted. After his mother’s health deteriorated last December, they came back to Mumbai which gave Shaikh one more opportunity to explore his love for rap.

“I started getting demotivated and quit rapping.”

On his friends’ recommendation, he joined a local initiative called The Dharavi Project, a school aimed at introducing local students to the world of hip-hop and activities such as b-boying, rap, graffiti, DJing and beatboxing. Dharavi is considered to be the biggest slum in Asia and has more than a million residents. The Dharavi Project first began in 2013 as a group of enthusiastic volunteers taught children hip-hop for free in a 100-square foot room, encouraging them to pursue the genre.

His hard work paid off. While his family remained uncertain, Shaikh continued to work on his skills. He was invited to perform in a number of shows, including one with legendary Indian composer A.R. Rahman. Shaikh’s father is a huge fan. After he told his father about the show, he finally earned his stamp of approval and now has his family’s full support.

A post shared by The Dharavi Dream Project (@tddp_in)

The young artist is now set to join a certificate course on hip-hop launching next month, in collaboration with the University of Mumbai and The Dharavi Project. “I want to learn a lot more. I want to be a full-fledged musician,” Shaikh said.

The course on hip-hop comes after the release of popular Bollywood film, “Gully Boy,” a fast-paced saga that traces an aspiring rapper’s journey through Mumbai’s hip-hop scene. According to Dr. Yatin Ingle, course coordinator and a professor at Wilson College, University of Mumbai, their idea flourished several months before the film’s release. Ingle, a rapper himself, was intrigued by the history of the genre and stumbled upon The Dharavi Project. Several discussions and a lot of brainstorming led to a collaboration with Dolly Rateshwar, programme head at The Dharavi Project. “Hip-hop in India still needs to be recognized as an art,” Ingle told Re:Set. “Every [kind] of performing arts has a course. Why can’t we have a course for hip-hop?”

Also read: From Battling Depression to the Olympics

The three-month long course will examine the origins of hip-hop, current challenges, women in the industry and more. It will include knowledge sharing sessions as well as practical projects that will require students to participate in workshops. The sessions will be split between the University of Mumbai and The Dharavi project. A number of underground artists, including a few from Pakistan, are slated to join as instructors. The latter will teach through video sessions.

Beatboxing has given Sadhana confidence and a medium to express herself.

The course has no age restrictions and is open to anyone with a high school diploma. A few students from The Dharavi Project will have their tuition fees waived which are pegged at ₹7,000 (~ $100 USD). “We were very clear in our heads that we were not doing this for the sake of coming up with a course,” Rateshwar told Re:Set, explaining that they just want to give students a platform to perform fearlessly. Many of her students are being vocal about their feelings by painting graffiti in Dharavi. They send out messages on topics they feel strongly about such as freedom of expression, hip-hop and the art of hustling. “Knowledge is another important element of hip-hop. It’s based on the culture…and sociopolitical issues that exist in society,” Rateshwar said. “Unless a person is aware of what’s happening [in society], it’s unimaginable to rap or beatbox…or put those thoughts [out there].”

“Beatboxing gave me a different experience.”

20-year-old Sadhana Tawde loves beatboxing. “I am an introvert,” she told Re:Set. She didn’t feel ready to perform until she was introduced to beatboxing and met like-minded artists. “Beatboxing gave me a different experience. It gave me confidence,” she said. Her parents were OK with her pursuing beatboxing as long she continued studying. “My parents are looking at it as a hobby, not a career option,” she explained. The scariest part for her family is tackling societal stereotypes attached to beatboxing such as it is full of people experimenting with intoxicants or kids on the wrong path, Tawde added. They don’t want Tawde to earn a bad reputation. She trains at every available opportunity, allowing her work to speak for itself.

The musician believes that the hip-hop course will allow more people to appreciate the importance of music in her community and take it seriously.  While she doesn’t think it’s possible to teach someone the art of hip-hop, she agrees that good instructors can help them hone their skills. “If you have the talent, you can mold it. You can’t force someone to come be a rapper,” she said.

Ever since Tawde actively started participating in the beatboxing scene in 2017, the artist has noticed an alarming lack of women in the space. “For me, the hip-hop community has a low amount of girls,” she said. “Maybe there are girls who are doing this art form, but their parents are not supportive and they are afraid of coming out.”

Sadhana plans to continue honing her beatboxing skills in a male-dominated space.

Hip-hop continues to be stigmatized in certain pockets of Mumbai due to notions that it’s associated with debauchery, alcohol and wrongdoing. Vikram Gaja Godhakiya, 19, is a b-boy dance instructor who’s set to join the course next month. “I feel ecstatic when I perform,” he said. “B-boying is a type of dance form that can’t be completely choreographed. It’s up to you and your personal style.” Godhakiya wants more people to understand what his passion really is all about. “I wasted five years trying to change people’s approach towards hip-hop. I don’t want students in the future to go through similar experiences,” he said. “Whenever I dance, I forget everything – the good and bad that’s happened to me. I stop caring what others think of me.”

From Languages to Math: How Music Can Help Learning
What Teachers Need to Know About Childhood Trauma