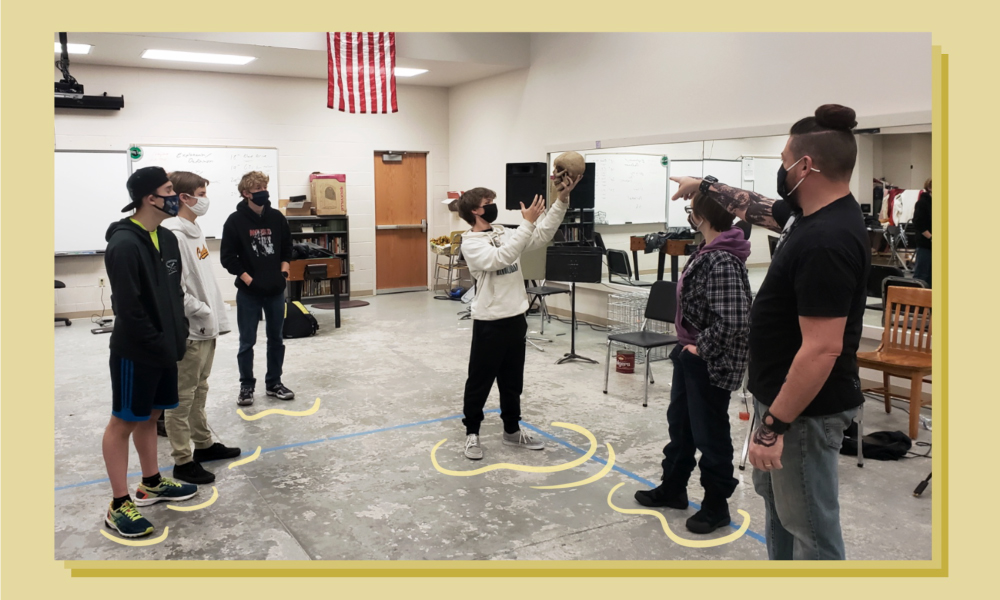 From incorporating masks into costumes to livestreaming shows online, theatre educators have had to think out of the box. Photos courtesy: Bradlee W. Skinner

coTwo weeks before the opening night of his theatre department’s spring show in March last year, Bradlee W. Skinner had to do something that he’d never done in his 20-year career — cancel a production. An educator and theatre director based in Wyoming, Skinner, and his students had to put months of work on hold to comply with the COVID-19 restrictions that were being implemented at the height of the pandemic.

Now, nearly a year into the COVID-19 crisis, the students have been able to put up eight productions over the course of the school year while navigating safety precautions. “It’s a fast learning curve but it’s been fun,” Skinner told Re:Set, emphasizing what a great teaching opportunity this has been to allow students to come up with solutions for the challenges they were facing.

From livestreaming shows to learning how to set up cameras, Skinner shared what’s worked for his theatre program to adapt to the pandemic.

Making the most of the situation

Right from the scripting stage, there are opportunities to incorporate the current circumstances and make it more seamless. Skinner remarked that since using masks onstage is advised, the theatre program is now prepping to do a Steampunk version of Cinderella where the masks have been built into the characters’ costumes.

“We’re in the arts — we’re singing, we’re speaking and the band is playing, there’s all this concern about [whether] the arts are just spitting on people,” reflected Skinner, reiterating that they relied on studies and information from health officials to determine what could safely be performed. For musicals, since singing may cause a higher range of spread, the students perform with masks while regular plays can be done without it. 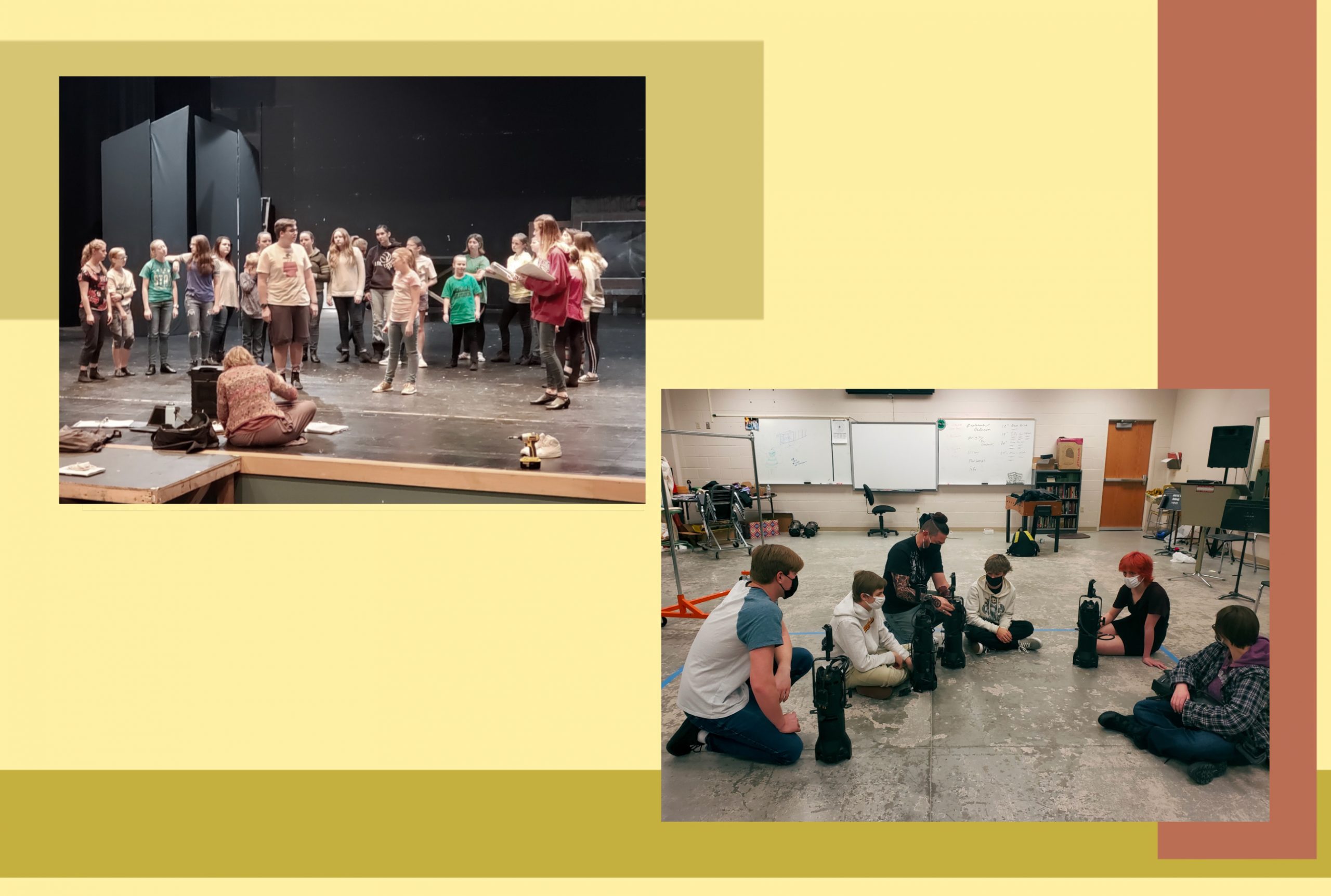 Due to COVID-19 restrictions, Skinner’s students now have to wear masks while rehearsing and have fewer people onstage.

The group has also used multiple streaming platforms including No Audience, Showtix and Onstage to reach their audience as in-person viewing became restricted. “Students had other family members from other states who had never seen them on stage now able to watch their grandkids and friends in a way that they weren’t able to before,” Skinner said.

It has been an interesting growth journey for Skinner and his students. For their first show, they started off livestreaming with just one camera set up to cover the whole stage. “Then we started getting more creative, adding multiple cameras and started filming it more like a sitcom,” he added. Skinner said they spent around $2,000 USD on video equipment, and as they weren’t traveling for events and field trips, they were able to use the money in their budget for this purpose.

One of the challenges that they ran into was that some of their productions could not be livestreamed due to copyright restrictions. But, they were able to get recording rights so that the shows could be recorded and made available on rental services.

The advantages of double casting

In the past, Skinner had not been a fan of “double casting” but newer circumstances have shown him that having two casts performing the same productions on alternate days has its advantages.

From voice acting to making commercials, there are numerous options to teach skills “beyond the theatrical environment.”

“This allows us to rehearse with fewer students on stage. Some can be in the audience taking notes while their counterparts are rehearsing,” he remarked. And if a student falls ill or is quarantined, there is an automatic backup for their part. This has also allowed other students who previously had time conflicts to partake, he added.

“It’s a great opportunity to teach students other forms of acting,” Skinner said. He recommends that theatre educators who are looking to explore online opportunities and recording teach students more about film and television and the differences in acting styles there. Give them opportunities to make their own short films, he suggested, and also look at local competitions where they can enter. From voice acting to making commercials, there are numerous options to teach skills “beyond the theatrical environment.”

Seeking solutions from others

Due to his prior experience in TV and film, Skinner said that he was able to share his knowledge with educators from other states where restrictions were even higher. He added that Facebook groups with educators and theatre professionals were a great source of ideas and inspiration. He cited an example where someone suggested using the orchestra pit with reflective lighting to have a pool scene, thus allowing for more creative usage of the space. “A lot of times theatre directors are [usually possessive about their ideas] but…now it’s like ‘This is my idea, I’d love to see what you think about it,’” he explained.

Also read: We Asked 5 Teachers to Tell Us How They’re Innovating in the Classroom

Like many schools in the country, Skinner’s workplace is also currently implementing the hybrid or blended learning model where some students attend in person while others attend from home. Anticipating a situation in the future, the team has also prepared a contingency plan involving cameras where people can watch the rehearsals from home and be involved in practicing. “Not sure how it will work but we’re ready to try it,” he said.

Starting Early and Staying Ahead of Stress: How To Beat Test Anxiety and Ace the SATs
“Roots” To “A Beautiful Mind:” Teachers Share Their Recommendations on Films To Show in Class

Livestreaming Shows and Masks Onstage: How This Theatre Teacher Is Navigating COVID-19 to Continue Productions