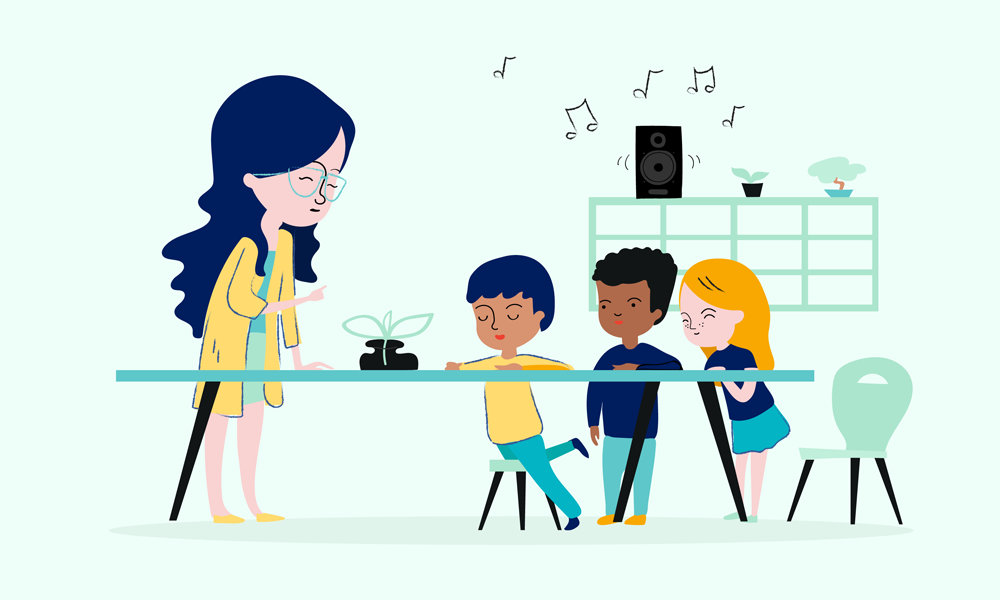 Over a year ago, a teacher in North Carolina, U.S.A. asked his nine-year-old student, George Yionoulis to explain his autism to other classmates. The bespectacled, dark-haired kid made a touching and viral music video. “I like having fun just like you, so if you ever see me playing by myself, it doesn’t necessarily mean I don’t want to play with you too,” Yionoulis explained in the video. “I can hear and see a lot of things and sounds all at the same time, which sometimes makes it hard to focus on one sound or thought.”

Music is a powerful tool and can produce intense emotions. Singing familiar tunes brings people from different walks of life together, acting as a unique equalizer. Music can also be applied to the less obvious spaces such as the classroom. For example, in certain Indian schools, students clad in matching school uniforms are taught to memorize the multiplication tables via songs. Fun and frolic are friendly add-ons here.

We remember song lyrics because they matter to us. According to Daniela Sammler, a researcher at the Max Planck Institute for Human Cognitive and Brain Sciences, our brains process music and lyrics separately, making it likely that we’ll be able to recall the words years later. Plus, in all likelihood, we’ve heard the song many times and there’s a solid emotional connect.

Lidia Stankulova, a Bulgarian harpist based in Dubai, believes that music can be a vital instrument for learning. “It’s not necessary to become a professional musician, but to have the connection is mandatory. Every child needs to have a musical education, for their own sake,” she said. She picked up music at the age of five and discovered the harp when she was 11. “I learned musical notes before I learned the Bulgarian alphabet, and I can say the school years have been easy for me. With full-time music education, the usual subjects looked much easier,” Stankulova told Re:Set.

Research has consistently shown that music can have a positive impact on the brain. According to the International Foundation for Music Research, songs play a vital role in the development of school-aged children. Plus, the Center for New Discoveries in Learning states that pupils can learn at least five times faster than the normal rate if educators play music in the classroom.

Every school can encourage students to pick up a guitar, violin or even a trombone. The bonus of incorporating music into lessons? Kids won’t be bored and sessions will be more interactive. According to Dr. Pantelyat, evaluations held at public schools in Chicago and Los Angeles have indicated that music can improve language processing in children. “What’s interesting is that those who studied music [an instrument or singing] in childhood and then stopped for decades still have better sound processing than older adults who did not study music,” Dr. Pentelyat told Re:Set. He emphasized that it’s crucial to use an individualized approach and experiment with different genres in the classroom.

In Dubai’s Deira area, a 13-year-old of Indian origin, Suchetha Satish is carving a path of her own by combining over 100 languages with scores of tunes. The young singer has thick hair, an easy smile, and a polite demeanor. The Indian High School student has broken two world records and embraced the challenge of learning as many languages as possible through music. While studying for exams, Suchetha has a clever method. “Sometimes, I memorize lines in the form of a song,” she explained before using an easy tune to remember a line from her science textbook. “Inside the nucleus, there lies a spherical body called the nucleolus,” she sang for Re:Set.

It’s important to acknowledge that teachers don’t need to be professionally trained in music to use it as a learning tool. Focusing on contemporary music that students can relate to can help. Online resources are extremely useful. For example, a teacher could refer to this multiplication mix in math, use this mental health playlist on Spotify to help their students de-stress and teach their class about plate boundaries through this GCSE geography song. For Suchetha, memorizing the lines from several languages through music has worked wonders. She aced a spelling bee contest in 2013. When asked whether she’d like to see her teachers use music in class, Suchetha told Re:Set that she’d love that because it’s something she incorporates into her own study sessions.

Research has also indicated that music creates a more inclusive learning space for kids with special needs. Songs can break down complicated concepts; and visual cues such as photos and printouts can help students of all learning abilities follow along.

Music as a learning tool has endless possibilities. It really can bring an academic session to life and spread joy, wonder, and laughter within the four walls of a classroom.

From Languages to Math: How Music Can Help Learning