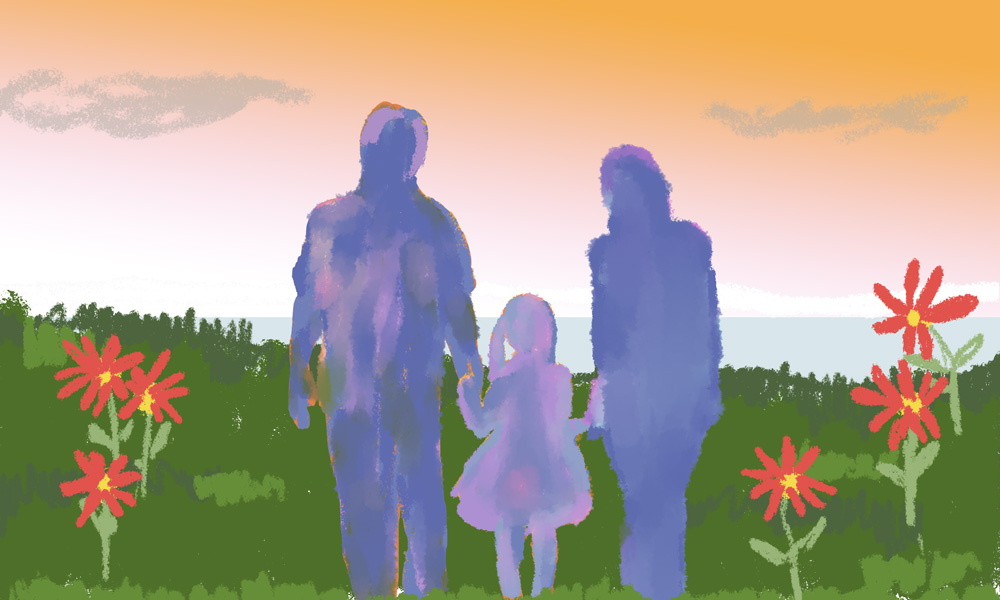 Children with special needs should be equipped with information to empower them. Illustration: (c) Reset Fest Inc, Canada.

11-year-old Amelia Smith from Horsham, U.K., affectionately known as Millie, gets along famously with her friends. “She loves meeting new people, sometimes a bit too much, and loves to show people everything that’s going on,” her father, James, told Re:Set. “The flipside of that is that she doesn’t have much of a sense of danger or what’s appropriate, so we have to watch her all the time when we’re out to make sure she’s not latching onto someone she shouldn’t.”

The first time she learned to walk independently, Amelia was nearly seven. She has a condition called Cri du chat syndrome, a rare chromosomal disorder that affects approximately 1 in 50,000 babies globally and causes delayed physical, speech and learning development. “You definitely need to know her to know what she’s trying to say,” James said. “She loves to be active, and always wants to be out and about doing things.” James and his wife, Amanda, knew something was off when they got prenatal scans done, but only received a definite diagnosis a few days after Amelia’s birth. “It was the best and worst week of my life, both at once,” James reflected. “A new baby, then suddenly the future crashes down on you.”

“A new baby, then suddenly the future crashes down on you.”

The Smiths have struggled to make life smoother for Amelia who’s feeling more frustrated as she’s getting closer to puberty. “As she’s gotten older…she’s certainly changing how she experiences different settings,” James reflected, explaining that she’s often frustrated and grumpy when she’s back home from school because she likes being out. “That’s true with all kids to an extent, so we’re told, but it breaks our hearts to know that other people get the best experience of her when we’re the ones that love her the most,” James said, adding that she’s in a much better mood when she’s at school with her peers and not feeling cooped up at home.

For Amelia Smith, getting older has been frustrating as she looks for ways to express herself. Photo courtesy: James Smith

Amelia has started lashing out, showing powerful signs of her despair by refusing to turn up for meals at the right time, telling everyone to go away when she’s upset and biting herself. “She doesn’t injure herself, but it’s a good way of getting attention as we immediately leap to stop her doing it,” James explained. “She wants to be more her own person, but at the same time, doesn’t really know what that means, I think. There must be quite a conflict going on inside.”

Mental challenges among families and kids with special needs and disabilities aren’t a mainstream topic of conversation yet. It has been a bumpy ride for the Smith family so far. James and Amanda have battled depression for years. For Amelia, it’s frustrating to not be able to express her emotions fully. “She can’t communicate what she wants to say, or can’t get her needs met in terms of attention and company, and she hates it,” James said. “It’s hard to find out more because she can’t communicate her feelings much, but we can see it from the outside.”

“The consequences of missing a diagnosis can be really detrimental to their [kids’] mental health.”

According to Dr. Michelle Matusoff, a child psychologist, reading up on their kid’s diagnosis can make it easier for parents to find ways to help a child’s mental health. “The best thing for parents is to make sure they educate themselves as much as possible,” she told Re:Set, adding that ignorance can lead to stress and overreliance on alternative options that aren’t evidence-based or safe. Additionally, not seeking professional advice can make things feel more overwhelming.  As per Dr. Tracy Alloway, a psychologist who has conducted extensive research on the link between working memory and learning disorders, not receiving a proper diagnosis can make mental health problems worse in children. “The consequences of missing a diagnosis can be really detrimental to their [kids’] mental health,” she told Re:Set. “We know that almost nine times as many boys will receive a diagnosis of ADHD than girls but yet…almost three times as many girls with ADHD will end up experiencing anxiety,” she said. Studies have indicated that young girls often tend to be underdiagnosed with ADHD, specifically. This can leave them more vulnerable to mental health challenges, Alloway said.

For Jessica D’Costa, (name changed to protect her family’s privacy), a Mumbai-based mother of three kids, understanding more about her kids’ learning disorders has helped her cope. Jessica and her husband discovered one of their sons had autism after her husband realized their child was experiencing common symptoms associated with the condition, such as avoiding eye-contact, experiencing outbursts and not responding to instructions. They received a diagnosis shortly after that. “He has his extreme mood swings,” D’Costa told Re:Set. “He is happy and he [also feels]…rage…at times he is absolutely angry.” Regular sessions with the occupational therapist and simple exercises with stress balls have benefitted him. The pressure had an impact on D’Costa too. “There is a lot to cope with,” she reflected. “I think over a period of time, my coping mechanisms have kind of grown.”

She currently tries to focus on spirituality and practices open communication with her family. For her son, living with autism has been difficult in more ways than one. “He is offended by nasty remarks,” D’Costa told Re:Set. “He doesn’t know how to handle a joke or mild teasing by his brothers. He vents his anger with outbursts and fistcuffs even now.” However, D’Costa thinks that having two siblings has made her son more mindful about controlling his anger and knowing that he can’t always escape the repercussions for bad behaviour. “The best part is that they [her sons] team up back again the next day [after a disagreement],” she said.

Matusoff believes being more observant about mental health is essential. “I get a lot of kids who are brought in because they have anxiety or depression,” she told Re:Set. “[Receiving a diagnosis and being introduced to] the label takes the blame off them…they can see there’s a reason for their struggle. The best part of my job is giving them the diagnosis…an explanation for their struggle.”

The Smiths focus on identifying Amelia’s triggers and making her as comfortable as possible. Photo courtesy: James Smith

Matusoff is a huge advocate of methods like cognitive behavioural therapy and transparent communication methods, both of which influence thinking and help develop effective coping mechanisms. “Make sure you don’t try to scare them [children] or hide [information] from them. The more they know, the more they are empowered,” she said. “They’ll be able to advocate for themselves better.”

“Make sure you don’t try to scare them [children] or hide from them.”

For Alloway, normalizing the conversation around mental health for kids with learning disabilities and their families is a priority. She’s written a series of children’s books that present learning disorders as superpowers. “As a mother, it’s very important for me to make sure that this population is supportive [towards mental health],” Alloway said.

James and his family are still trying to find a way out. “We’re not really very good at this, either for Millie or ourselves,” he told Re:Set. “We’re so exhausted and overwhelmed that time for us is pretty much non-existent, so self-care goes out of the window buried under a pile of things to do.” They’re still looking for answers and try to make Amelia as comfortable as possible and pay attention to her needs and triggers. It’s incredibly lonesome sometimes because they’re usually without a support network, James said, adding that it’s hard for them to relate to other friends with children. For his family, it’s a battle they’re willing to fight with honesty and grit. “Our kids need us more than any other child does, and we love them no matter what, just like any other parent. But that doesn’t make it any easier.”

The Re:Set Guide to Creating a Racially Aware Curriculum
On Love, Independence and Grieving: Shattering Down Syndrome Stereotypes

The Mental Health of Kids With Special Needs Is Still Overlooked