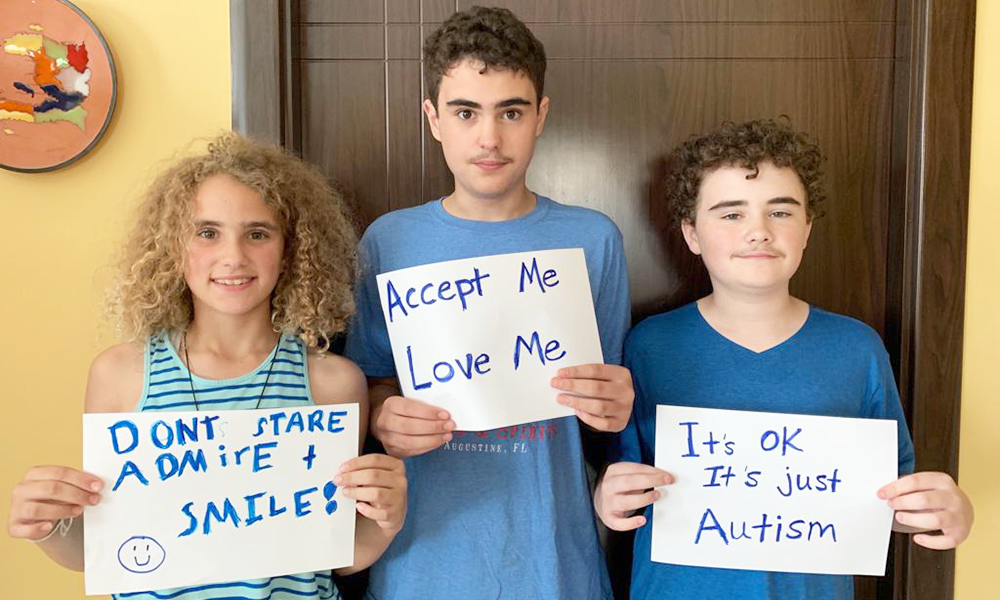 I know you’re staring at us because you’re curious about why my son is squealing and flapping his hands. I hear you whispering to your friend asking, “What is wrong with him?”

I do my best to ignore your stares and comments, but the look of disgust and disapproval tightens my gut and breaks my heart because all I want is for my son is to be accepted by this world.

I’m the mom of a 15-year-old boy who has autism. My son, Owen, looks like most boys his age — tall and handsome. He doesn’t speak yet and he uses an iPad to communicate his basic needs. However, when Owen gets excited or upset, he forgets about his iPad and gets your attention by squealing, stomping and flapping his hands. When we are out in public, his siblings are constantly reminding him about where he is and how he should act so he doesn’t attract unwanted attention from others.

If everyone knew the boy that I know, they would fall in love with him.

It’s really a bit sad that he can’t just be himself. Sometimes, after a night out I just come home and cry, not for myself but for Owen. If everyone knew the boy that I know, they would fall in love with him! He’s amazing — I’m not just saying this because he’s my son. He’s smart with an amazing sense of humour. Owen loves being around family, and loves to be hugged and squeezed. He’s fond of swimming, basketball, and playing on his iPad. He’s a typical teenager when it comes to these activities that his neurotypical peers also enjoy. Unfortunately, there’s more to his story. Owen’s autism journey began in 2005, when we noticed that his language was regressing and he wasn’t putting words together. He was diagnosed with autism spectrum disorder about two months later.

For many kids like Owen., autism remains a minefield. Photo courtesy: April McCabe

Many children who have autism may behave in ways we don’t understand when they’re out in public with their family. Their behaviour can cause other people to stare and make rude comments. Sometimes the comments are so hateful that the mom breaks down and cries. However, many people are understanding when we take the time to explain that our child has autism. Their stares change from judgemental to empathetic. Unfortunately, the majority of the time we are too busy tending to our child’s needs to explain the behaviour, so we’ve learned to ignore the hurtful stares and carry on with our day.

Also Read: How to Advocate for Children of Determination

Some people have said they feel children who behave this way shouldn’t be allowed to be in public places or place the blame on the parents for the child’s behaviour. Should these families be confined to their homes and not allowed the basic privileges everyone deserves? Every person — neurotypical or with special needs — deserves to be a part of society, and each one of them can contribute something valuable to the world if we give them the support and opportunity they need.

For April and Owen, something as simple as going to the mall has been exhausting. Photo courtesy: April McCabe

Taking a child to the mall is something most parents take for granted. For a parent of a child with autism, the process is a lot more complex. We have to spend hours or even days preparing our child so they know what to expect, explaining what they’ll do step-by-step. We plan meticulously, evaluate all possible risks and are mentally prepared for the stares from strangers if our child does something that causes people to notice us. Our daily errands are not easy when our child is with us, but we must expose them to everyday life if we want them to learn how to care for themselves one day.

Taking a child to the mall is something most parents take for granted.

A parent of a child with autism wants the same things any parent wants for their child: to be happy, loved and accepted. So please, here’s my earnest request: next time, when you see a parent struggling to help their child with autism calm down, don’t judge them harshly. Just give us a reassuring smile, a thumbs-up or just say, “hey, you’re doing a great job!”

The writer is the mom of  three kids. April’s son, Owen has autism and has inspired her to become an advocate, blogger and author to spread awareness and acceptance for autism throughout the world so that no one feels alone.

Autism Through a Mom’s Eyes