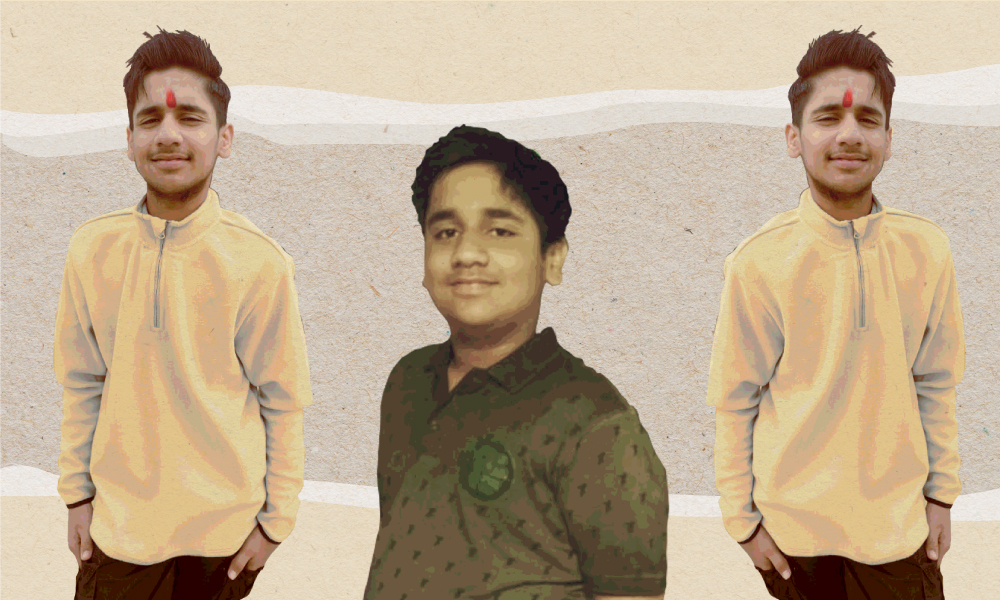 "People in school made fun of me and called a buffalo." Photos courtesy: Yash Pathak

Yash Pathak doesn’t mind the lockdown. For the 15-year-old resident of Uttar Pradesh’s Faizabad, the COVID-19 induced lockdown gave him a chance to reassess his life and work on his weaknesses.

“I’ve never had many friends, so I don’t miss going out,” Pathak told Re:Set. “People use you for exams and then stop being friends with you. That’s what I’ve learnt from this generation of people.”

Pathak’s pre COVID-19 schedule was gruelling. He woke up at 6:30 a.m. on weekdays, then attended school from 8 a.m. to 2 p.m., before taking tuition classes for two hours. He had to take both math and science tuitions because the tutor wouldn’t admit students who only wanted to learn one subject. After that he sat down for homework, and then self-studied till midnight.

When the lockdown hit, he found himself with lots of time and was bored. “I slept half the day,” he said. “Especially during the first phase of the lockdown. But when classes started again, I realized I hadn’t opened a book and some people in class had finished half the books.”

He soon caught up, especially with the increased involvement of his family. His parents spent more time at home, so they all bonded by watching films. “The last one we watched was Shakuntala Devi.”

Additionally, his daily schedule has changed, as he now wakes up at 7 a.m. and goes to bed at 11 p.m. On some days, he skips attending online classes as his eyes get strained. This isn’t unusual for Pathak, as he used to miss school once a week to self-study. But the extra hours in the day have helped.

“I’ve become more self-sufficient,” Pathak told Re:Set. “Without being in class, we have to work harder. Teachers are trying but we can’t interrupt them as we used to in class because they have to finish the classes. Sometimes the internet doesn’t work.”

“I clear my doubts on YouTube channels like Dear Sir and Edumantra,” he added. “My marks have improved a bit because marking descriptive answers is sometimes subjective. With multiple choice questions that element is taken out.”

Pathak left tuitions as the lockdown began. The classes still go on, and students attend them every morning from 6 a.m. to 8 a.m. because their teachers then have online lectures as they also work in schools.

Pathak is using this free time to work on himself.

“I’m 5 feet 6 inches and was 84 kgs until recently,” he said. “I had gas problems, breathing problems, pain in my legs and was lazy. People in school made fun of me and called a buffalo.”

“With this extra time I started going on my roof and did yoga, skipping and running daily. My parents were also worried about my diet, but I persisted. Now I’m only 60 kgs,” he added proudly.

Pathak goes to Udaya Public School, a local CBSE-affiliated private school. The school has tried to help students and parents with various fallouts from COVID-19, including reducing fees for students and holding sessions on mental health. The special focus has enabled the students to bounce back from the uncertainty of the pandemic.

“They tell us about exam stress and anxiety, which has helped me,” Pathak explained. The only thing still missing in his perfect lockdown life is his brother.

“He’s left home to study in New Delhi,” he said. “We used to stay in the same room, and despite him being seven years older we used to play together, he used to help me study,” Pathak remembered.

“Now I don’t spend that much time in that room. I just stay with my parents’ most of the time. I miss him a lot.”

Also read: The Trap Year: Indian Students Are Changing Where They Choose to Study Abroad

‘I’ve Fallen From the Sky:’ Indian Tuition Teachers Are Struggling Because of COVID-19
A Day in the Life of an Indian College Student During COVID-19