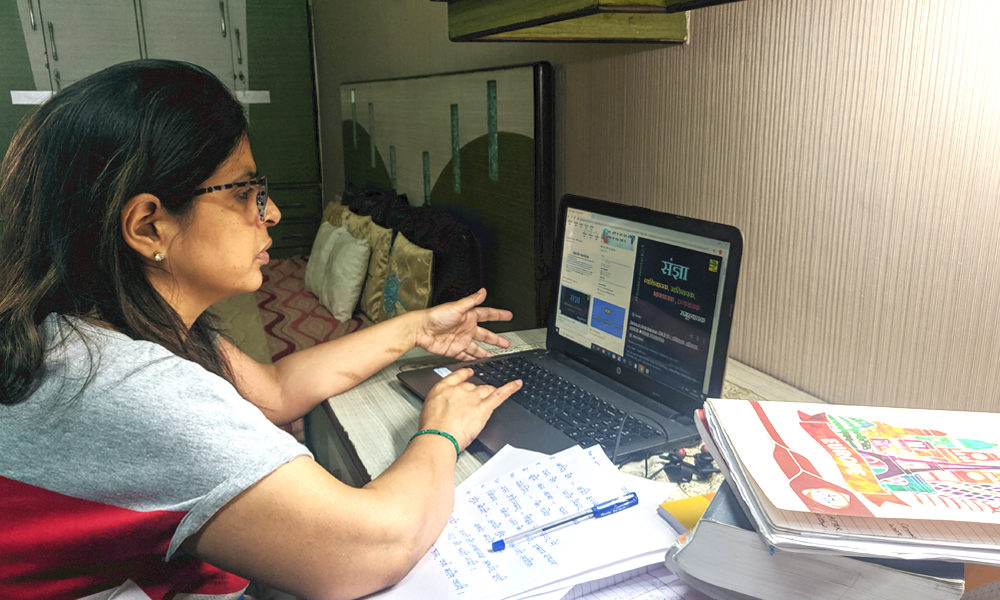 Sharad confessed that the pressure has resulted in her screaming at her husband more often. Photo courtesy: Sharad

The biggest issue Sharad (last name withheld on request) faces on a daily basis are the videos. Her teenage son connects her laptop to their TV via HDMI, and starts recording as she explains the basics of Hindi grammar sitting in front of their TV. They duo records them in five minute batches because of low upload speeds, and often each video can take six tries to get it right.

“I’m not a professional anchor,” she exclaimed.

Sharad is a private school teacher in New Delhi, and daily video production is one of the many ways her life has changed since COVID-19 disrupted the education space. She teaches Hindi to grades 6 to 8 and doesn’t have any printed material because this academic year started before books could be distributed. She now downloads PDFs from the National Council of Educational Research and Training (NCERT) website, makes lesson plans, holds classes online, and then uploads videos for those who were unable to attend. Sometimes, students start playing music during lectures.

Sharad’s son has been helping her through her tech troubles. Photo courtesy: Sharad

“The classes are only for four hours, but the preparation, along with managing the household is very difficult,” Sharad told Re:Set. Her school, which has been in lockdown for over a month, was initially using Zoom to conduct classes, but parents started asking for change after news of privacy issues in the video app hit local WhatsApp groups.

“I didn’t know how to use Zoom, so I learnt it. Now we have to learn this new software called Microsoft Teams. Some teachers don’t have good internet, some don’t have laptops,” she said. “We don’t know how much the students are learning as we aren’t doing any assessment. We have up to ten students from Economically Weaker Sections of society in each class, many of them have missed classes because they don’t have adequate phones or tablets.”

“We will have to revise everything once classes resume, which will [likely] be August at the minimum,” she added.

Sharad has trouble sleeping nowadays, and has decided to take a sleeping pill a couple of times a week to rest properly. Her work hours range from 9 am to 10 pm because parents still text post-classes. This is in addition to washing utensils and cooking for three people every day. She confessed that the pressure has resulted in her screaming at her husband more often.

Younger teachers, who don’t have families to manage, are faring a little bitter. Ritu Kapoor (name changed upon request), a private school teacher in the northern state of Haryana, was excited about the prospect of online classes and getting hands-on experience with technology. Most teachers in her school had never thought of virtual classes on a large scale, but her experience so far has been mixed.

“I just share a PowerPoint presentation and give lectures. We don’t even know if the students are listening and paying attention.” she told Re:Set.

Kapoor explains the mysteries of the universe to her students while not being able to see their faces. Photo courtesy: Ritu Kapoor

Kapoor’s classes run for nearly an hour on Microsoft Teams, with her presenting from a PowerPoint and students asking questions on chat. She tries to answer them in the last ten minutes of the class, but doesn’t know if the students were present throughout the session. Sometimes, she can hear parents prodding their kids to ask questions.

“The biggest problem is that we don’t have any time to ourselves anymore,” Kapoor told Re:Set. “Online sessions are for three hours, but management arranges frequent team calls with an hour’s notice. Many times management logs into [the classes] without telling us, and we get random feedback checks. So the teachers are just on edge throughout the day.”

Also read: Class of 2020 Reflects on Graduating Amidst a Global Pandemic

Some class teachers or homeroom teachers in her school have been provided laptops, but subject teachers haven’t been afforded the luxury. With regular power cuts, teachers have to manage everything including finding cell service or power backups by themselves. Some are teaching classes of 40 on their phones.

“The big positive aspect of this situation is that I don’t have to wake up at 5:30 am and dress up to go to school,” Kapoor confessed.

The problems extend to public schools too. According to Srishti Paliwal, a consultant with a non-profit which works with schools run by the Municipal Corporation of Delhi, the issue plaguing public schools is the stress upon teachers and principles to continuously engage the students on a digital medium without any previous training and support.

“All this communication,” Paliwal added, “is happening on WhatsApp groups.” Teachers make worksheets, send them on said groups, and then send voice notes to the parents as instructions. Parents instruct the kids on the subjects, who then fill the sheets and send them back on the groups. This creates a lot of back and forth.

To conduct such classes, the teachers haven’t been provided with any electronic equipment like tablets or laptops. The only help is that the NCERT updates the curriculum regularly on its website for grades one to five.

“Schools have been given mentor teachers to help, but this is the first time this system is being used and the role of that mentor itself is unclear,” Paliwal said. “The teachers are stressed and feeling helpless because they don’t know how to effectively give work, don’t know whom to ask for help, and their own work is being closely monitored.”

India’s Education System Needs a Fix. Can School Vouchers Be It?
Why A Gap Year Could Be Useful During COVID-19

COVID-19: Inside the Life of Indian Teachers