What’s Causing Teacher Burnout? Acknowledging the Elephant in the Classroom 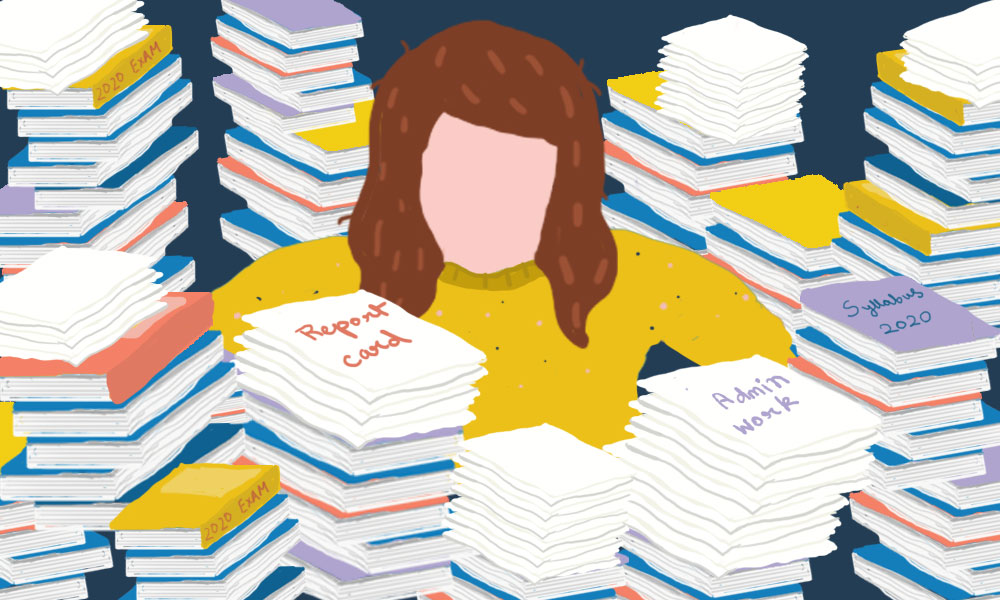 Teacher burnout is on the rise and is often a result of a combination of factors. Illustration by (c) Reset Fest Inc, Canada

“I really badly wanted to be a teacher my whole life,” said Kiran (name changed to protect her privacy) about her motivation to become a Teach for India fellow. Teach for India is the non-profit Indian chapter of the global ‘Teach for All’ network. The organization recruits young people with college degrees to work as teachers in low-income schools for a two-year period. Kiran started as a teacher to fourth graders at a low-income public school in Mumbai, India, when she was just 21-years-old. Her drive echoes the sentiments of countless other young people who become teachers in the hopes of giving back to their community.

Carter Krueger, a math teacher turned health coach from Colorado, U.S., told Re:Set about his “dream of going back to where I went to high school and being the teacher and coach that I never had.” This led him to work with kids every summer as a camp counselor and tutor, and before his 22nd birthday, he “got a real teaching job at a summer school.” A few years in, Carter found himself wondering about the other experiences he could have had if he had not decided to become a full-time teacher so early in his 20s.

Carter Krueger, a math teacher turned health coach,  dreamt of going back to his high school and being the teacher he never had. Photo courtesy: Carter Krueger

Teaching is often touted as a noble career choice, and the young seem to be attracted to its idealistic promise. However, there is a growing crisis among the members of the teaching community world over. According to a 2017 survey conducted by the American Federation of Teachers, a teacher’s union in the U.S., 61% of teachers in the country reported their work as stressful, and 58% said that their mental health was ‘not good’ for seven or more days over a period of a month. They also reported struggling with workplace harassment, felt a lack of voice in school policy matters, and cited lack of training support from authorities like school boards. Signs of burnout, especially among young teachers, has been observed to be ‘contagious.’

In Re:Set’s conversation with teachers, we found that several of these factors co-exist and sometimes lead to one another.

“[When I became a teacher], a big challenge for me was the lack of support [from the organization] in terms of content and content delivery. In my first year, I was teaching students in grade 4, and I could clearly see that my kids didn’t know what they were ‘supposed’ to know,” Kiran pointed out. She realized it simply wasn’t enough to put the onus on students and that “a lot of these issues are structurally created.” Despite raising her concerns to the management, there were no coping strategies offered to her. “There was just more work expected from me [as I was reminded about how I was] doing great things in the lives of these children.”

Also read: Patience, Kindness and Spontaneity: Things I Learned From My Teachers

For Kiran, being overworked and stressed led to eventual burnout with symptoms such as  “getting physically sick, feeling dizzy and deep fatigue, and [sometimes] not being able to move, which wound up [taking the form of] other chronic autoimmune issues.”

“There were often fights on campus and students were far below grade level.”

In recent years, Teach for India has partnered with support providers for therapy and counseling services. “We also provide one-on-one support to all the fellows through a program manager who helps them plan and manage their time and helps them with finding resources [for the] classroom,” Abhik Bhattacherji, the director of communications and marketing for Teach for India, told Re:Set in an email.

Daphne Williams had a similar experience in her role as an elementary teacher at a low-income school in California, U.S. “This job came with a lot of emotional stress [because of] student behaviour issues. There were often fights on campus and students were far below grade level,” Williams recounted to Re:Set. “The union and other teachers were my support system, but we didn’t get a lot of support [from school administration and boards] to address our safety concerns.”

Despite transferring to a different school environment, Williams’ symptoms of stress continued due to a low-paying workload that barely allowed her to make rent. After experiencing mental as well as physical symptoms of burnout, which included “insomnia, teeth grinding and stomach issues ” Williams quit teaching and now works as an instructional designer. “I could not imagine continuing in that direction for five or 20 more years,” she reflected.

Aisha Taylor, the principal of a K-12 school in Houston, Texas, U.S., is sympathetic to Williams’ decision. Speaking to Re:Set, she said, “[We must] understand that when teachers get out of the profession, their reasons are not because of teaching itself, but that they have to do everything outside of teaching.” Taylor too has worked in the past on a campus “known for having a lot of fights.” One situation involving student factions got particularly bad where the district attorney had to get involved and Taylor, as a teacher, had to take on the responsibility for various administrative tasks and initiate stakeholder management to bring it under control.

The International Board of Credentialing and Continuing Education Standards has connected the attrition of school teachers to poor mental health training and noted that half of all new teachers in the United States will quit within their first five years. This turnover negatively impacts student outcomes and demands structural change based on teacher feedback.

Sudarshana Srinivasan, who served as a TFI fellow at the start of her teaching career, also had to grapple with external factors, such as neighbourhood politics, during her stint at a “vastly under-resourced school in Asia’s largest unauthorized housing colonies in Delhi.” She reflected on one of the most challenging moments where she “had to deal with a local politician who stormed into the school and threatened to remove [the fellows from the school] if we didn’t take 12 more children in each of our classes. We already had about 45 students in every class and taking any more was out of the question. I had to calmly explain our work to her [until she was convinced that our work there was worthwhile].”

Even in the absence of such tumultuous circumstances, teachers do much more than just teach. “Outside of the classroom, there are a lot of other decisions and planning that needs to get done to make the in-class experience better, while also trying to appease the school administration and support parents [through regular communication],” Krueger elaborated. “Lastly, if you really want to be a ‘good teacher,’ you need to get involved outside of the classroom [and take on additional responsibilities] as a club sponsor or team coach.”

To understand classroom dynamics, Re:Set spoke to Anindita Kundu, a trauma-aware therapist who works with The International School Bangalore in India. “[As] the only adults in the room, it becomes [a teacher’s] responsibility to hold space when the kids are having any kind of intense emotions without having an [intense reaction that comes naturally] in that situation,” Kundu described. In her work with teachers, Kundu reminds teachers to acknowledge their own emotions in a given situation. Taylor too has similar advice for her peers in the profession. “If your employer doesn’t understand, then you have to understand yourself and your body and take that time,” she advised.

In their conversations with Re:Set, many of the teachers reported feeling like they are not good at their jobs when their students are having a tough time in class despite the teacher’s best efforts. Krueger recounted this experience from his first year as a teacher when, “everyday after school I would write down the names of three to four students that I [felt that I didn’t] connect with. Then I would come up with a plan for our next interaction to strengthen [the connect] or to fill in the gap. This led me to feeling absolutely defeated many times per week.”

Kundu identifies Krueger’s experience  as work-induced anxiety. In her workshops, she invokes the polyvagal theory to help teachers recenter themselves in such situations.

“When your brain is overworked [it sees your body as being stuck in a] fight or flight mode. In response, it releases stress hormones [that make you alert and highly sensitive],” Kundu said. “In such circumstances, there is a need [for the teacher] to regain composure, calm down and rest, if needed. This can be done by stimulating the vagus nerve as it helps transition [from a state of stress to composure].”

Apart from acknowledging the need for systemic change, Kundu shared the following tips for teachers to activate the vagus nerve: