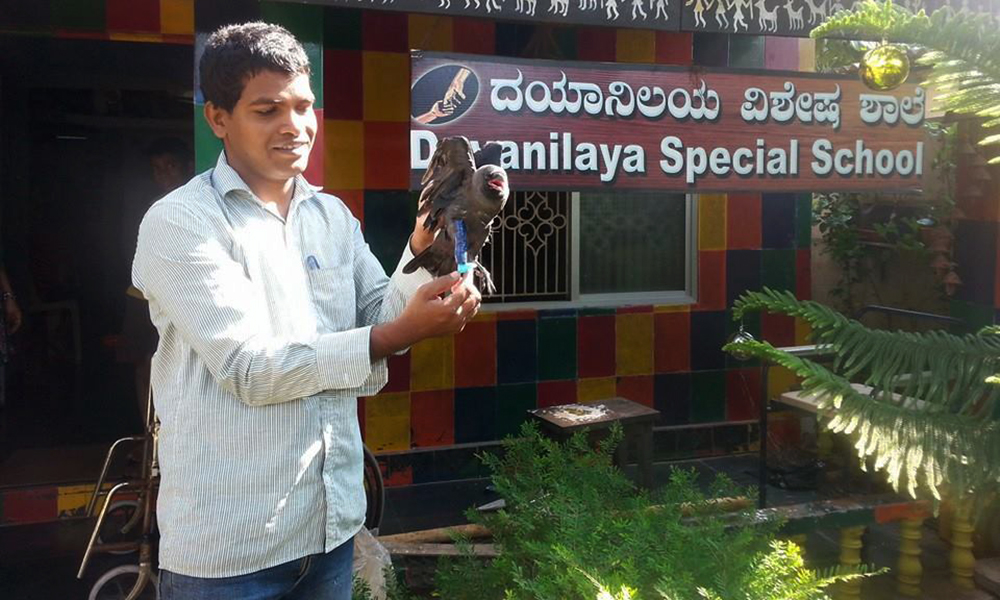 Dayanilaya is the brainchild of Cyril Lopes who's intent on making a lasting impact. Photos courtesy: Cyril Lopes

In Kumta, a picturesque coastal town located in southern India, a home doubles up as a school for children with special needs. Colourful blocks in shades of yellow, orange, red and green make up the school’s building with a prominent signboard that reads, “Dayanilaya Special School.” The school’s front yard is full of greenery. Illustrations of men, women, children, and animals walking together adorn the entrance of the school.

Since its inception in 2010, Dayanilaya has admitted 40 students with special needs. “When I was still in college, I’d go to different homes on weekends and teach kids with special needs,” Cyril Lopes, 35, the school’s founder, told Re:Set. “The school came into the picture when I started feeling like it would make sense to give all the kids a common space where I could teach them together.”

Lopes is passionate about teaching. “[This is] no social service. I like it so I do it,” he said, referring to his school. No child is charged fees at Dayanilaya and many of them stay with Lopes full-time who funds it through a combination of small projects at Dayanilaya such as maintaining a plant nursery in the school’s area and making everyday products including disinfectants, pickles, jewelry, crockery and more. He also works part-time at a local shop after school.

Also read: We Meet the Educator Behind the World’s First Junior MBA Program

In India, people with special needs continue to face societal stigma and discrimination because of a lack of facilities and misconceptions about disabilities. This has not deterred Lopes, who started Dayanilaya with minimal funds. “We have to try [to change things], right?”

Lopes was motivated by his family’s experiences. “I was inspired by my brother as well as my parents. They taught me to work hard and be honest,” he said. “My brother couldn’t walk properly, he was diagnosed with polio. His experiences, combined with what my parents taught me, led to me working on the center for people with special needs.”

“I was inspired by my brother as well as my parents.”

It is estimated that 12.1 million Indians with special needs are illiterate and lack adequate support and resources in mainstream schools. For Lopes, innovative thinking and an inclusive approach is the way forward. The teacher, who has a bachelor’s degree in special education and a diploma in vocational training, teaches his students based on their comfort level, focusing on their strengths and weaknesses. Everyone’s allowed to join, no matter what kind of disabilities they have. “I focus on principles like repetition, reinforcement, and conditioning,” Lopes said. “If [a student] is only able to lie [down], you teach him how to sit [up].” Lopes doesn’t believe in being rigid with his teaching methods; customizing the tasks based on what a child can do and tracking each student’s progress separately. He also eases them into tackling several tasks such as being better at communicating, learning to write their own names, looking after the animals in the school and teaching their peers.

Dayanilaya has 40 students with special needs.

Additionally, Lopes has introduced his pupils to music and trained them to play the violin and guitar. His family joins in along with qualified teachers who charge minimal fees and a physiotherapist who volunteers in his free time. Lopes is also a tennis coach and dabbles in other disciplines including hockey and archery. In Abu Dhabi at the Special Olympics this year, one of Lopes’ students, Sandesh Harikantra, a table tennis player with learning disabilities including dyslexia, dysgraphia and dyscalculia, made his team proud by bagging a gold medal. Harikantra’s parents are fishermen and couldn’t afford proper support.

Harikantra was diagnosed by doctors after he faced learning difficulties in a mainstream school. His days were unpredictable and he was often given a 10-rupee note and told to spend the rest of the day alone while his parents were at work. This changed when someone told them about Dayanilaya over five years ago. “I’m really happy,” Harikantra told Re:Set via Lopez who acted as a translator. “I have lots of responsibilities. I look after the younger kids, teach and play table tennis, water the plants and take care of the cows.”

The school focuses on several disciplines including sports.

For Lopes, educating kids at Dayanilaya and training Harikantra for the Special Olympics required him to pick up new skills including sports. He relied on friends and the internet for advice on sports coaching and trained at Netaji Subhas National Institute of Sports in Punjab as a coach.

“Everyone has financial issues, including me.”

However, his journey has been rough. From building makeshift table tennis tables using DIY tools to selling his motorcycle to raise funds, Lopes has battled several challenges and is planning to look after his students for the rest of his life. “Everyone has financial issues, including me. I never thought I’d open a school at first: I assumed I’d teach a few kids and help them out. Ten [students] turned to 15 and the number grew,” he reflected. “And then I realized I’d need resources and teachers. I started feeling like money was a hurdle. I didn’t have anything. I sold off my bike and laptop. When I had nothing left to barter, I figured I could do something at home.”

He started a nursery and planted saplings, accumulating money for the school in uncomplicated ways and asking friends to pitch in. While Lopes hasn’t been able to secure support from the government yet, he’s hoping things will change in the future. “This is the eighth year [of attempting to secure funds]. I’ve tried my best,” he said. “We have a positive attitude. Hopefully, we’ll get [funding].”

“I’ve learned so much after building this school. These kids have taught me the importance of keeping things simple,” Lopes said. “They treat everyone equally which is how we should actually be like.”