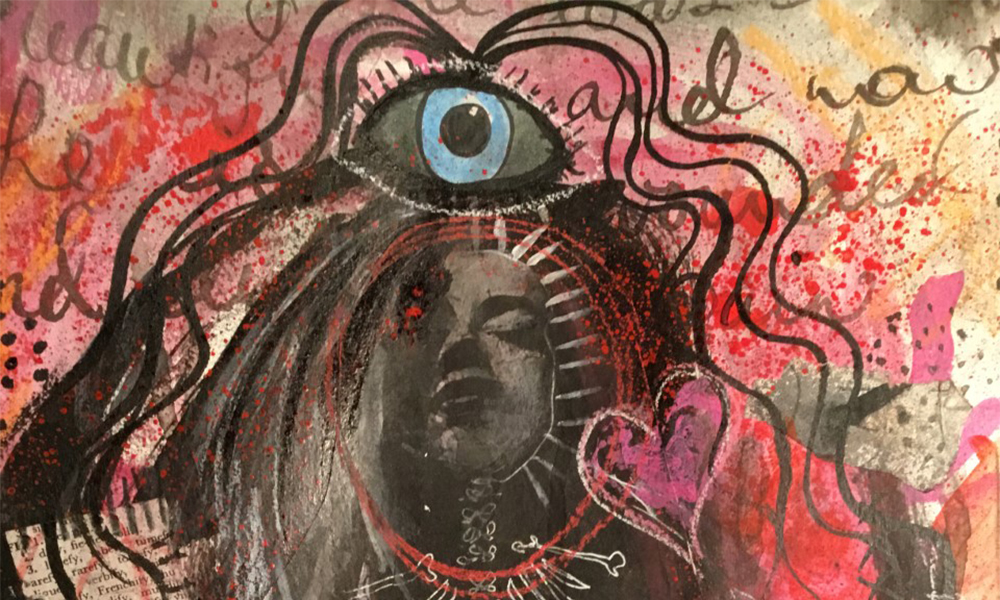 Armed with her box of colouring pencils and a sheet of paper, 55-year-old Julianna Trembecki began to sketch. “It was depicting how I was feeling. I could see the grief on the paper in front of me. Using dark colours, I was…drawing broken hearts and girls’ faces who looked like they were crying,” she told Re:Set.

Trembecki has been practicing art therapy for six years now as a way to reflect on her emotions — whether that’s through light sketches, colourful paintings, or creating something of her own from cutouts of pictures and phrases from magazines.

Art therapy, or creative therapy, has been around since the 1930s, but only gained traction years later. Renowned educator Margaret Naumburg was one of the first advocates of art as a therapeutic outlet in the early 20th century. She focused heavily on using techniques to access the unconscious mind, because it can tell us what the conscious mind cannot. Memories and feelings that we’d otherwise be unable or unwilling to communicate verbally are brought to the fore when we put less pressure on ourselves to talk and we let our minds speak for us through creative activities like drawing. “Art therapy really allowed me to express my negative emotions; I was suddenly consciously aware of my feelings,” Trembecki said. “I put on a mask my whole life, but art therapy removed it.”

“I put on a mask my whole life, but art therapy removed it.”

Naumburg showed how it could foster healing and promote mental well-being by letting patients face their emotions and address hidden feelings that they couldn’t otherwise talk about. Since then, the medium has been used by therapists around the world, but certain misconceptions about it still persist.

According to Catherine Knibbs, a creative psychotherapist in the United Kingdom, people think creative therapy is only for children or those with special needs, but it’s a myth. Activities such as painting, drawing shapes and patterns and playing in sandboxes are usually associated with young children. Adults, especially, tend to be skeptical about how art therapy can actually help them. “Many of my adult clients actually use the sandboxes during their sessions,” Knibbs emphasized.

A typical session with the sandbox can involve using various figurines to recreate scenes from past memories. Knibbs will start by asking clients to pick a figurine that represents them and another for an individual involved in a particular incident that’s playing on their mind. “We have everything from three-headed dragons, witches and zombies to knights and mystical creatures,” Knibbs said. Using the figurines, Knibbs encourages her patients to act out the scene. “It might start with the three-headed dragon, for example, coming over and eating the little knight, and the knight won’t be saved, which might indicate abuse as a younger child.”

While it might come across as a childish and innocuous activity, these reenactments can give psychologists a greater insight into their patient’s trauma. “We will also talk about why they have chosen that specific figurine and [how it] represents the individual,” Knibbs told Re:Set. “Even during play, we can pick up on what’s happening underneath.”

While traditional counseling and speaking about their experiences and feelings may work for some people, others may find it harder or prefer not to express themselves through words.

According to Knibbs, when the brain experiences trauma, whether that’s a loss, stress or a mental health illness, the area for language in the brain can close down. This means that while memories are stored in our brains, we may be unable to talk about them because the area for language simply doesn’t allow us to. “But through art therapy, these memories, experiences and feelings [can be] brought back to us,” Knibbs said.

And this is something Trembecki knows all too well.

Trembecki has experienced her fair share of trauma, starting with the death of her father when she was 9-years-old. A few years later, her brother committed suicide. She was later in “a very unhealthy marriage, that was toxic and psychologically abusive, and it broke down,” Trembecki said.

This concoction of distress left her with an overwhelming amount of emotions that she simply didn’t know how to process. “My emotions were really intense. It was really difficult to isolate how I was feeling. My mind felt like I was in a cyclone and my emotions felt like tsunamis,” she said. Unsure about what to do next, Trembecki turned to a psychologist.

They delved into cognitive approaches, behavioural therapy and trauma-focused activities, but nothing seemed to be working for Trembecki. She tried everything from mindfulness and breathing techniques to writing down her emotions and coping mechanisms when she felt overwhelmed.

Eventually, her psychologist suggested art therapy. “I had always been creative as a child, so I wasn’t scared to start but I didn’t know what [to] expect,” she said.

She was asked her to draw the first thoughts that popped into her mind and bring the sketches to their next session. Trembecki drew images of young girls’ crying, dark symbols and patterns, and watchful eyes — a reflection of her loss and trauma. “Art therapy opened up a window to my soul,” she told Re:Set.

The therapist used the artwork as prompts to get Trembecki to explore her feelings.

“She would ask me, what do you see here? How does this picture make you feel? I could see a lot of pain and grief, and it really helped me focus on those feelings because I could see them in front of me,” she said.

Also Read: A 27-Year-Old Emirati Artist Uses Moving Artwork to Reach out to Others with Depression

Talking about her emotions became easier once she started illustrating them, because she could see the pain in front of her and there was a visual aid to help her express how she felt. “It was as though I could really connect with my emotions. My sketches were the bridge between my unconscious and my conscious mind,” Trembecki explained.

“It’s a third-person perspective and it allows my clients to feel safe.”

According to Knibbs, using physical resources to aid emotional understanding is a common and useful technique.

For example, for a patient with anxiety, Knibbs might suggest using pictures that consist of lego or gingerbread figures. She’ll ask them to pinpoint on the figure where the physical sensations manifest in the body. “It could be a black ink dot in their tummy, for example. Then I [ask] what happens next, and the dot might become spiky, and spread into their fingers, their toes and their heart,” she told Re:Set.

Doing this not only helps the patient see how their emotions are affecting them physically, but it also lets the therapist get a deeper insight into exactly how the individual is feeling as it shows their psychological reactions.“Once we know their responses, we can help them come to terms with these and talk about them in more detail,” Knibbs said.

Art therapy provides therapists with a less intrusive way of digging into their patients’ emotions. “It’s a third-person perspective and it allows my clients to feel safe. There’s less pressure,” Knibbs explained.

Eleanor is a writer based in the U.K. who has a firm understanding of the education sector and focuses on helping others support the well-being and educational development of students.

‘A Window to My Soul:’ How Art Therapy Helps When Words Can’t