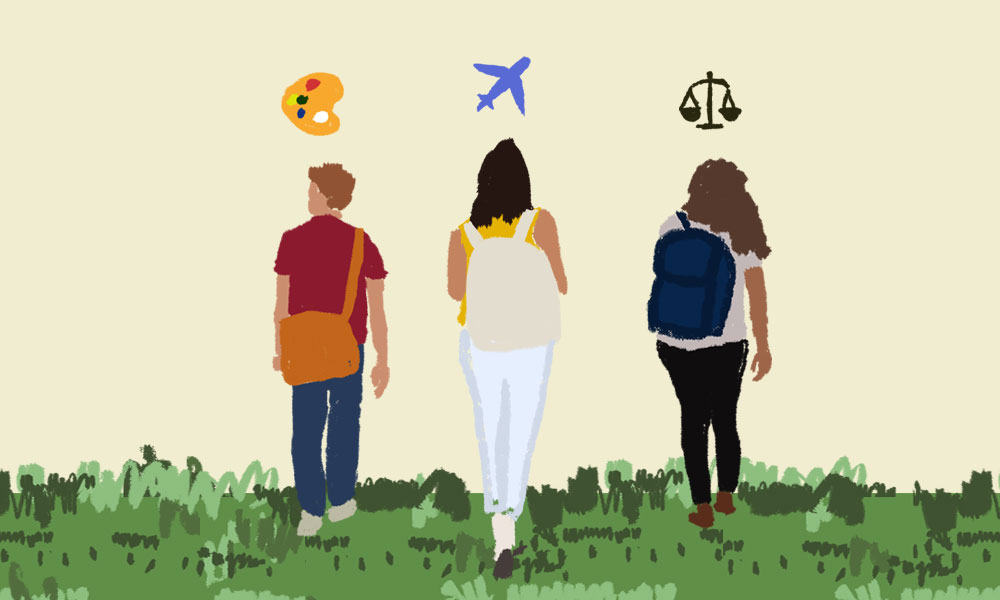 Exasperated, I blurted out, “Fine, you tell me what I should do. This is my first time being the parent of a teenager.”

Once I’d said this to my son, I realized just how true it really was. I had read a lot of books on child-rearing when he was born, but as the business of life took over, I felt like I didn’t have to rely on any manual to raise him.

As parents, my husband and I followed his cues and did the best we could to stimulate our firstborn intellectually and socially. We kept him engaged through academics, sports and travel. When it was time to pick a college, I sat him down and said that the final choice would be his. He was free to pick any school based on the criteria he felt were important. The decision was entirely his as it was he who would be spending four years studying there. He chose and we dropped him off, with all the fanfare associated with this major, albeit transitional, step in life.

I’m sure many of you did precisely that a few months ago and have been in touch with your child throughout the semester. Here’s a tip for you: Listen carefully and ask the most important question of all. Do you want to take a semester off? Why, you ask, is this crucial? It’s because, like me, you probably think asking about professors, courses, peers, clubs, laundry and food is enough. Turns out it may not be.

Your child may want to take a break in college to focus on their mental well-being or to reevaluate their major. Illustration by (c) Reset Fest Inc, Canada

While the concept of taking a gap year is popular and many students actively figure out with their parents and schools how this will play out as they travel or try out an apprenticeship, there is often no guidance on taking a semester off.

When my son, for instance, broached the topic, I was taken aback. I had not foreseen the situation and wasn’t even sure why the request emerged. I called the academic dean at his college and had a long conversation. “I wish more students did this,” the dean said, to my surprise. “Our children work really hard throughout high school and when they land on campus, after the excitement of the first few weeks wears off, they realize they are exhausted and may not really be ready for college.”

Taking a semester off has several benefits, including giving students the time to figure out what they want to do next. It also gives the student the confidence to know that if they need to lean on their parents even after leaving home, it’s OK.

The dean advised me to let my son take a semester off, “maybe even two,” and return “rejuvenated.” Word of caution from him: “Don’t let him stay in his room and play video games. Make him attend classes at a local college, get him to work part-time, give him time to clear his head.”

This is exactly what we did and, for now, it seems to have worked out for us. Ditto for Geetika Bhatia, a junior at Muhlenberg College in Pennsylvania. Bhatia decided over winter break last year that she needed time away from campus after a foot injury resulted in her tennis suffering as much as her morale. “It was a good decision for me,” she said. “I loved my time off because I could recuperate. Everything in college is go-go but it puts a lot of pressure on you.”

Geetika Bhatia (right), a student in the United States, was initially worried about letting her parents down if she took time off school. Photo courtesy: Mukta Bhatia

Her mother, Mukta, a real estate agent in Short Hills, a suburb of New York City, says she is glad that her daughter was home for a semester. “It would have been better if she had done it earlier. I think initially she felt she would be letting her parents down or that her tuition would not be reimbursed or some such concern.” Finally though, Bhatia’s injury became a “trigger.” While at home, she worked two part-time jobs and is now back at school.

Mukta feels strongly that it would be better for both students and parents if the colleges had “a more organized way” of letting students have the option to take a semester off.

Like me, Mukta has been talking to other parents and finding that while the young adults we drop off to college may seem ready, they might not really be. They likely need some more time to “find themselves.” Scared that social norms and neighbours’ queries may be too much to deal with, these young minds may not have the courage to speak up until parents nudge them.

As parents, we ourselves may not be ready to see our children struggle in this fashion. We may also worry about the harmful effects a break of this kind may have. How does one explain a gap semester on a resume, for instance? An easy fix is for the student to be gainfully employed during the time off so the positive impact of being off-campus can be projected. A student can also take a break to focus on their well-being and mental health, and as the conversation around mental health normalizes, potential employers will be more willing to accept the break on a resume. Plus, it shows resilience.

This, in fact, is the conversation you will need to have with your child if he or she suggests the idea of a semester off. Instead of panicking, you can guide them in figuring out the next steps. Talking to college administrators, faculty and close friends who’ve seen this phenomena up close will help calm nerves all-round. The administrators can help point out the correct procedures for taking time off, including how the financial arrangements with the college will be worked out.

Instead of panicking, you can guide them in figuring out the next steps

“For my son, the college he had picked just wasn’t the right fit,” said one mother who wanted to remain anonymous. “I asked him to give it one more semester but when I saw him become increasingly unhappy, I felt like it wasn’t working out.” Her son transferred to another college and now, she says, “it’s as if he has blossomed again. So well worth it.”

Not everyone will have the luxury to do this but if you, as a parent, think you can provide your child a second chance at picking a college or the option of time off, do consider it. Proactively, find out if your offspring wants to slow down a bit.

You are, after all, the haven your child can turn to before taking on the world, yet again.

Anusha Shrivastava, Ph.D., is the Director of Career Development and Alumni Relations at the Department of Statistics at Columbia University. A business reporter for over two decades across three countries, she got her second graduate degree from Columbia’s Graduate School of Journalism in 2002.

How GurgaonMoms Helps Women Become Mompreneurs Through Community Building
‘Lower the Bar:’ Reflections From One Mother’s Journey With Postpartum Depression

Why Your Child Could Use a Semester Off University