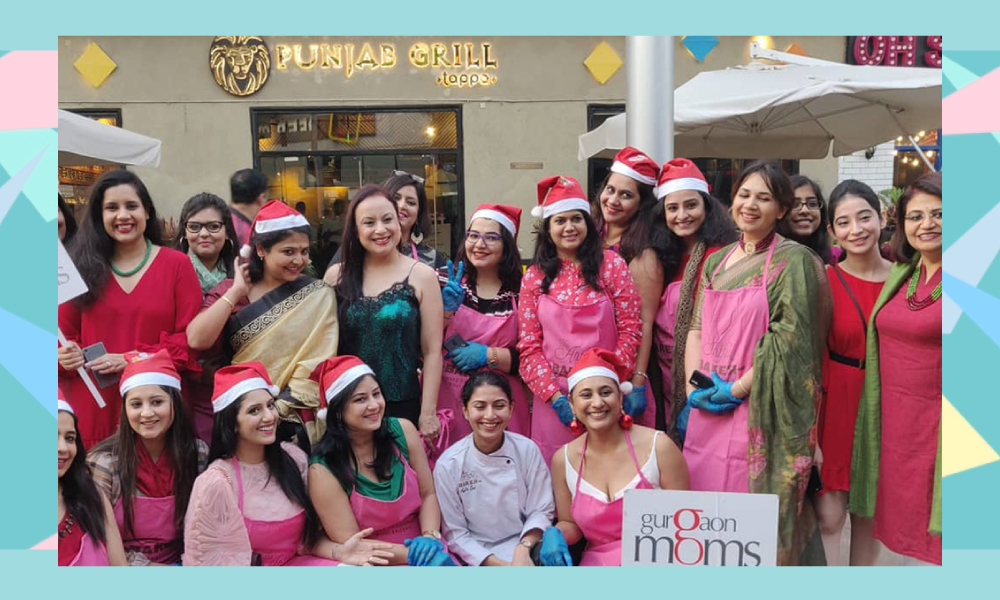 “Yes, I am marketing my product, but everyone is sharing their feelings, ideas, all the time." Photos courtesy: GurgaonMoms

Neela Kaushik is in the middle of arranging a nutritionist to record a video for moms in Gurgaon. With the spread of COVID-19, the nutritionist will advise women on what groceries and health-related objects to buy, and how much to keep, as people have started hoarding things. The moms are waiting for the nutritionist’s inputs.

The aforementioned video, of an expert relating advice to an eager audience which will have an impact on their lives, is ten years in the making.

In 2011, 14 moms from Gurgaon went to get coffee post-lunch in the area’s famed Galleria Market. The plan was made off a prompt in a Facebook group called GurgaonMoms. The women liked speaking to each other so much that they made a plan for an evening out the following week. Gurgaon in the state of Haryana is a young, booming city, and has seen infrastructural and economic development only in the last two decades. It’s growth has recently become a contradiction, with it’s high Human Development Index ranking, and the infamy of being the world’s most polluted city.

That sesh took place at a lounge, where in the middle of drinking, one mom broke down, and confessed that for 12 years, she hasn’t had an evening or a night out, and that she’s been only going out with her family and children. For 12 years, she had gotten no time for herself, or as the moms decided to brand it, #metime.

“It became sort of a rallying cry for us moms,” Neela Kaushik, founder of GurgaonMoms told Re:Set. “We realized that we should create #metime even at home, and why it’s important for our families too.”

The group, which had started as networking support for moms, was gaining steam via word of mouth. Their initial events included “Pink Pamper Parties,” where they could get manicures and pedicures in women owned salons, followed by a luncheon. But with time, Kaushik started seeing spikes in data surrounding posts about mental health. “I realized that parents and husbands don’t relate to the issues moms face. But when moms spoke to the community, they found so many others going through the same thing,” Kaushik said.

When one woman wrote about domestic abuse and her struggle with it, others gave her advice on how to become independent. “As women, we’re societally built to be more relationship-oriented rather than transactional. That’s what enhanced — the interaction, as no woman said, ‘Ya ya it happens to everyone, it’ll go with time. Screw it.’ Many moms gave good advice, as they’d gone through the same thing, some had gotten past it.” 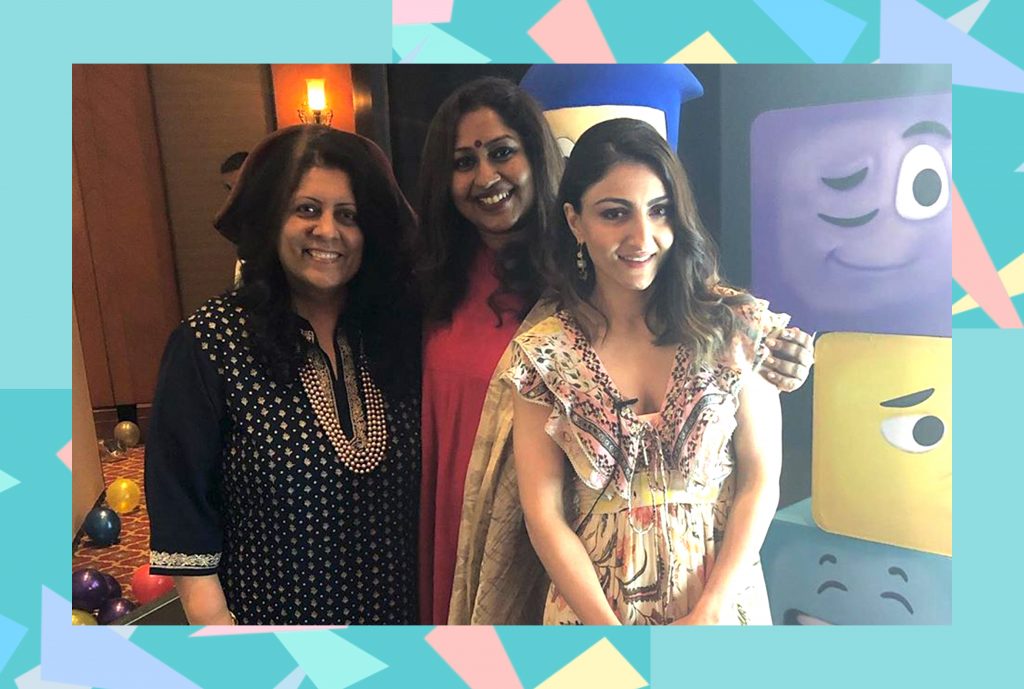 Neela Kaushik (middle) with activist Swati Popat (left) and Bollywood actor Soha Ali Khan at the launch of a streaming service for kids.

The group’s moderators, upon realizing that the members wanted to discuss more than parenting and childcare, started doing events, which has now snowballed into a 10,000 strong mom-community. To maintain quality, the group’s eight moderators go through posts, and keep a tight lid on the quality of conversation. The dialogues kept creating new opportunities for events and meet-ups, which eventually resulted in India’s first MomSummit. There, one mom, Anupriya Kapur, spoke about her depression, and then took to blogging. She’s now an influencer with nearly 100,000 followers.

For Kaushik, the ride wasn’t easy, but Gurgaon, with it’s developing economy and swaths of internal migration, was primed for new ideas of community building in the late 2000’s. “I didn’t think it [GurgaonMoms] would be accepted as I’m not from here, but Gurgaon is accepting as many people are staying away from their families. It’s why they need an anchor, and GurgaonMoms acts like one.”

After the success of the MomSummit, GurgaonMoms held a business plan contest for moms to come and develop start-up ideas, which ranged from online magazines for parental tips and age-appropriate knowledge content for kids, to deep cleaning at home, and creating uniforms for brands (hospitals in South Delhi have signed up with that mom), sustainable soaps and moisturizers, among others. GurgaonMoms got angel investors from Mumbai to help shortlist ten ideas from the 50 they had received. They then coached the women on their presentations and with one-on-one time.

“It became a constant feedback loop, and if I ran into trouble, others lifted me up.”

One of the big successes of the contest was 40-year-old Meghana Narayan, who had left her cushy consulting gig at McKinsey and Company to start Slurrp Farm. The start-up provides healthy millet-based food for children. As of this year, they’ve served over 500,000 customers.

“Apart from the help, I realized that by spending time with the moms, I could refine my product, understand my target audience better,” Narayan told Re:Set. “It became a constant feedback loop, and if I ran into trouble, others lifted me up.”

Narayan, like Kaushik, also made friends via the community. Once, one mother posted in the group that she made 100 pancakes for her kids’ class, and thanked Slurrp Farm for their millet-based products. Narayan then called her, and developed a friendship. “Yes, I am marketing my product, but everyone is sharing their feelings, ideas, all the time. That’s really helpful, not just in business, but also your day-to-day life.”

Other members too have left jobs for start-ups. “In corporate settings, when men speak versus when women speak, people give more weightage to men,” Kaushik explained. “I too couldn’t find a corporate job after my maternity leave. Despite being an MBA, having worked with Ford India, I got an offer for ₹10,000 ($134.44 USD), two hours away from my home. My responsibilities were of a project manager, but the title was of a project coordinator so they wouldn’t have to pay me as much. These things make you question your own abilities. But the community helped many women with their confidence as their voices were respected, given weight.”

Even apart from the businesses which have grown out of the group, managing the community itself has become a business. As the group started making pages of the local newspapers, brands got interested. The first one was Women’s Horlicks. To integrate the brand, rather than an endorsement, the group decided to create activities which would engage moms with the brand.

“We never told anyone to drink Women’s Horlicks. We asked them why they thought Vitamin D was important for them? Why is bone health important for moms? Then we did a ‘Strong to the bone’ story contest, where women wrote about their stories around bone health,” Kaushik recounts. The group has since worked with other brands like the Tata group, Fortis Hospitals, Biba and WeNourish.

It’s also become a full-time job for five women. Their website has a blogger, a constantly updated community group, and even job listings for the mothers. Kaushik maintains that it’s always been a for-profit social venture, because not maintaining transparency wouldn’t work with such a close-knit community.

“What keeps us going, is the feeling of being together, you know, having a support system outside of the immediate family,” Kaushik reflected. “Recently, one mom posted about loneliness, confessing she was on the verge of a breakdown. Without prompts by the group’s  administrators and moderators, the community members started commenting, took her to coffee and posted pictures from their meet-up. It was a beautiful moment.”