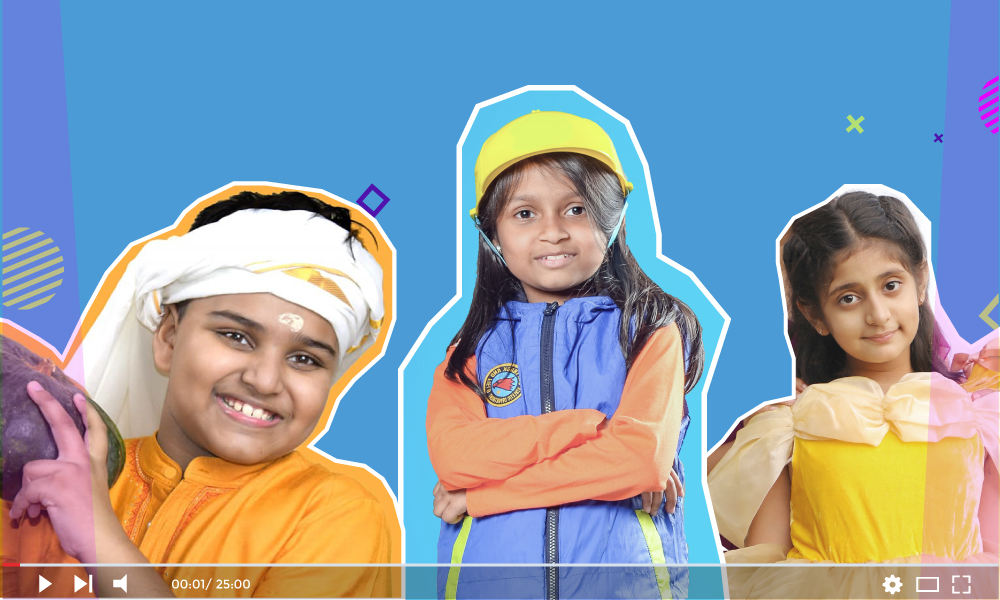 “For me, making the videos became an act of showing support for what she believed in." Illustration by (c) Reset Fest Inc, Canada

“The comments get quite nasty sometimes. Some said ‘She isn’t pronouncing the words well,’ some commented about her race and once someone said, “You’re spoiling her by giving this many toys,” Manish Kanojia told Re:Set. “In one video her shoes were dirty, so people commented that Indians are dirty.”

Noida-based Kanojia is the father of eight-year-old Kyra, a YouTuber who makes videos unboxing and reviewing toys. She got into this trend after she recorded her first one, at the age of three, of a custom happy birthday song. Her dad then asked a friend to edit and post it online, and it became a rage among their friends. She liked being in front of the camera, and would record and send selfie videos to her grandparents about her family vacations.

“One time she said she wanted to review toys,” Kanojia recalled. “I thought it was only because she wanted the toy, but she told me about videos of two Filipino sisters reviewing ice cream makers and bubble makers on YouTube. So I went to Jhandewalan in Delhi, an area famous for toys, found a bubble maker, and we made a video review.”

“The comments get quite nasty sometimes.” Photo courtesy: Manish Kanojia

The video was a hit within their social circle and after a few more videos, toy companies approached Kanojia asking Kyra to review their toys. According to Kanojia, they now get toys from companies in Austria, England, China and the United States.

Once the videos gained steam, Kyra gained celebrity status which, for her parents, became complicated to manage.

“In school, kids told her ‘Hey you’ve become famous, someone will kidnap you,’” Kanojia told Re:Set. “I had to sit her down and tell her that it doesn’t happen and we’re taking precautions for privacy. But sometimes, it can get difficult to calm the kid down.”

Growing up in the spotlight

There are a litany of different explorations on the internet of childhood celebrity and its effects on a person. There’s even a recent movie about it, “Showbiz Kids,” made by a former child star. The biggest issue growing up, according to clinical psychologist Eileen Kennedy-Moore in an interview to USA Today, is public scrutiny. According to Kennedy-Moore, childhood is about finding out who you are and being able to relate to others, and those things are harder to learn when you’re famous. That amount of public scrutiny makes it hard on kids to do that. They can’t mess up so they have to adopt a very self-assured, precocious identity very quickly.

Anantya Anand, a YouTuber with nearly 10 million subscribers, too has struggled with the added attention, according to her mother Nisha Topwal.

“Even about me, some people say that I’m getting work done by my child.”

“She wasn’t able to handle it initially,” Topwal told Re:Set. “She couldn’t understand why people were recognizing her or trying to speak to her. She didn’t understand what it means to be famous. She just enjoyed making videos.”

Topwal and her husband tried to keep then four-year-old (now nine) Anantya grounded by not telling her that doing these videos would make her popular or noticable. Anantya isn’t allowed to read comments or see how many people subscribe to her channel. That being a YouTuber, Anantya would have to deal with being recognized publicly didn’t even strike their mind until the channel crossed 100,000 subscribers. One day soon after, they went to a mall in Noida and Anantya started getting approached by kids and didn’t know why.

“We live in a society where we’ll always get positive and negative things said. “Even about me, some people say that I’m getting work done by my child,” Topwal explained. “Well, if my child was good at badminton, then I would’ve sent her to practice to get better and eventually be a professional. This is the same thing.”

“If my child has the passion for acting and I can give her a platform, then why not?”

“She didn’t understand what it means to be famous. She just enjoyed making videos.” Photo courtesy: Nisha Topwal

Cochin-based media professional Rajgopal Krishnan had to deal with an even stronger blitz of fame. His son Nihal, whose YouTube name is Kicha, became the first Indian to appear on The Ellen Show in 2016, after one of his cooking videos on Facebook went viral. The entire family went to the States and enjoyed a vacation, but for Krishnan, this meant added media scrutiny on then six-year-old Kicha, so he deleted his son’s Facebook page the night they landed in India.

“I was just thinking of the activity and messages he might get. Can you imagine what getting abused everyday does to a 6-year-old?” Krishnan asked. “I was cautious about giving information about him and telling people. I needed to keep a close watch to not let this impact his mental health.”

“We tell him to not take a stand on certain things like politics and tell him if you say something, there will be repercussions.”

“I’ve worked in the media, I’ve seen how it can affect people, the pressure and the limelight. I’ve seen people crash out of it very soon,” he added.

For years, Krishnan woke up at 5 a.m. and deleted comments on Kicha’s various social media accounts. The comments were “the worst things imaginable about family and skin colour,” he said. Now Kicha is 10 with his own phone and can see the reactions himself. “I have to tell him that this isn’t against him, that the people are just frustrated. It can get difficult,” Krishnan explained. He still controls what is posted and when on his son’s account, as to not let Kicha face any needless pressure. They also don’t let him work for more than two hours a week.

Although this does now include nearly five branded videos a month in addition to the motivational talks Kicha gives in schools and colleges.

“Everyone knows posting regularly is the best way to gain traction on YouTube, but we post only whenever he wants, there’s no pressure on him,” Krishnan explained. “We tell him to not take a stand on certain things like politics and tell him if you say something, there will be repercussions.”

“We post only whenever he wants, there’s no pressure on him.” Photo courtesy: KichaTube

From the outside, money might seem like a contentious subject. Sources told Re:Set some child YouTubers make up to ₹5 lakh (nearly $7,000 USD) for a day’s shoot, but in these families, parents have struck a partnership with their prodigies. Krishnan is honest with his son and tells him when he’s putting money in the latter’s account. They even occasionally spend it the way Kicha wants, like a donation he wanted to make to a charity supporting children with autism.

“When I wanted to buy a new camera for his shoot, he told me to take money from his account. He understands it,” Krishnan explained.

“It’s made our bond stronger, because otherwise you’re just studying or playing. Here we are building something creatively together.”

Despite the occasional pressure on the child, all the parents we spoke to referred to the hustle and bustle of parenting and raising a celebrity as a positive experience.

Anantya’s mother had quit her job as a sales person at a software company to spend time with her only child. The videos were what brought them closer and became a bonding activity which Anantya considered hers and her mother’s alone. “For me, making the videos became an act of showing support for what she believed in, like other mothers go take their kids to dance classes, and stand outside waiting,” Topwal told Re:Set.

Kanojia found his own solace in preparing his daughter’s toy reviews. They plan trips around it and find new toys together. “It’s made our bond stronger, because otherwise you’re just studying or playing. Here we are building something creatively together,” he reflected.

“It’s also a thing of pride, seeing my daughter do so well. So many of my friends and her friends’ parents ask me about starting YouTube channels.”

Also read: Your Family Tested Positive for COVID-19, What Next?

How This Mom Steadied Her Ship After Terminating Her Pregnancy
Want Children to Learn Empathy and Social Skills? Let Them Play With Dolls

Trolls, Fame and Money: What It’s Like Parenting a Child YouTuber