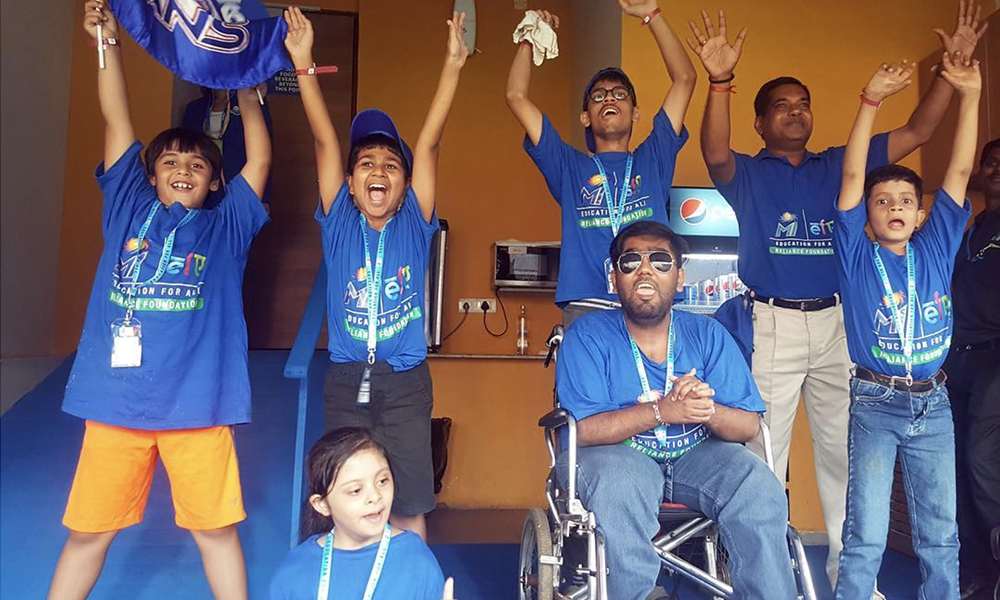 “I always figured that something was amiss with my son, Vir, but I never knew what it was,” Gopika Kapoor, a 44-year-old mother from Mumbai, told Re:Set. “A film about dyslexia had just been released in India and I thought my son exhibited similar symptoms, so I went to Ummeed expecting a diagnosis of dyslexia. When he was diagnosed with autism instead, it was earth shattering.”

Since Vir has a twin sister, Kapoor had a point of reference for Vir’s development as he was growing up. When he was around five months old, Kapoor’s family wondered whether they should get Vir’s hearing checked since he wasn’t very responsive to questions. Compared to his sister, he wasn’t as talkative or friendly, and was less willing to maintain eye contact.

Vir is thriving and performing academically well at a school for children with disabilities. Photo courtesy: Gopika Kapoor

However, Kapoor noticed a significant change in Vir after he started therapy at Ummeed Child Development Center at the age of 3. “He started looking at things; he started articulating more meaningful words. I learned to teach him how to do math using pieces of chocolate cereal in language he could understand.” At Umeed, Kapoor also learned how to increase Vir’s exposure to diverse individuals and activities in order to make him more expressive: “I took him everywhere. If I had to get vegetables from a vendor, I asked him to talk to the vendor. If I had to send something to a neighbour, Vir went instead of me. I tried to get him natural opportunities to engage with other children and develop his social skills.”

Ummeed’s 360-degree model of care is a rarity in India and goes beyond just a formal medical examination to make a prompt diagnosis. It also provides ample room for parents to get involved in understanding their child’s strengths and challenges through informal play-based techniques. Each child gets an individualized education plan, and a therapist actively works with parents to determine areas of difficulty and techniques to address them.

A social worker coordinates internally with the pediatrician and therapist and externally with schools, government agencies, and private service providers as needed. This ensures families don’t have to navigate the broader intervention system on their own and there’s continuity in care.

The fees vary based on one’s ability to pay and the center caters to different kinds of families, including both low-income and financially stable households. Without such support, low income households would be forced to turn to the public sector where services are fragmented and uncoordinated.

Many children in India don’t have access to early diagnosis and intervention and even parents who can afford to access services in the private sector struggle to find a good fit without adequate support.

“I spoke to a few therapists, but the sessions always made me feel terrible,” Kapoor said. “They were judgmental and very anxiety-provoking for me — they focused only on what I did wrong as a parent.”

At Ummeed, Vir’s parents and grandmother all took part in therapy sessions to find ways to support him. “There are no major miracles, but, at Ummeed, I learned that there are small ones which happen and learning to recognize them was a big step in itself,” Kapoor said.

“It took me 2-3 years, but I stopped looking at my son and seeing a big red autism banner,” Kapoor remarked. “Instead, I saw him as a child who was happy, who liked dinosaurs, and who also happened to be on the spectrum. That transition took me a while, but it is an incredibly important transition for parents to make.”

It was the lack of facilities and diagnosis in India which led Dr. Vibha Krishnamurthy, a developmental pediatrician, to relocate to Mumbai from Children’s Hospital in Boston in 1998. After working for a few years with non-profit organizations, she founded Ummeed in 2001.

“When I came back to India, I wanted to start providing these services through the existing hospital system and I thought I would start a department in a hospital,” Krishnamurthy told Re:Set. “At that time, however, the healthcare system was just not ready for this…that’s when I decided to start Ummeed as a non-profit.”

Adorned with paintings of children and creative pieces of artwork, the walls of Ummeed immediately foster a welcoming and inclusive presence. Mosaic tiles pave the way to a long corridor lined with a colourful mural and multi-coloured therapy rooms. If you are a parent of a child with a disability in India, such spaces are extremely unique.

“At the time we started, there wasn’t one roof under which families could get services. That’s something we really wanted to change through family-centered care,” Krishnamurthy said.

In India, one in eight children in the 2-9 year age group is estimated to have at least one neurodevelopmental disorder. Researchers assume this is a conservative estimate given the size of the population and the divide between the urban and rural areas, which makes one thing abundantly clear: when it comes to availing services, the demand far outstrips the supply.

“Services are still very patchy. They are mostly confined to the urban areas,” Krishnamurthy told Re:Set.

The challenge now is to prevent delays in diagnosis, reduce the gap from diagnosis to intervention in rural areas, and address the stigma associated with disabilities in India.

At 14, Vir is thriving and performing academically well at a school for children with disabilities.

“I cannot imagine the last 11 years with a neurotypical child,” Kapoor said. “Today, if you ask me whether I could have him as he is or as someone different — and it’s not that he’s not challenging, because he is a teenager after all — I would not want him to be anybody other than himself.”

Mohit Nair is a researcher and freelance writer dedicated to addressing critical public health challenges in India. Through research and advocacy, he hopes to raise awareness around global health equity and human rights. Mohit holds an MPH from Harvard’s Chan School of Public Health and a degree in Biological Sciences from Cornell University.

The Case for Starting School Later in the Day
Why are India’s Girls Being Enrolled In Government Schools and the Boys in Private?