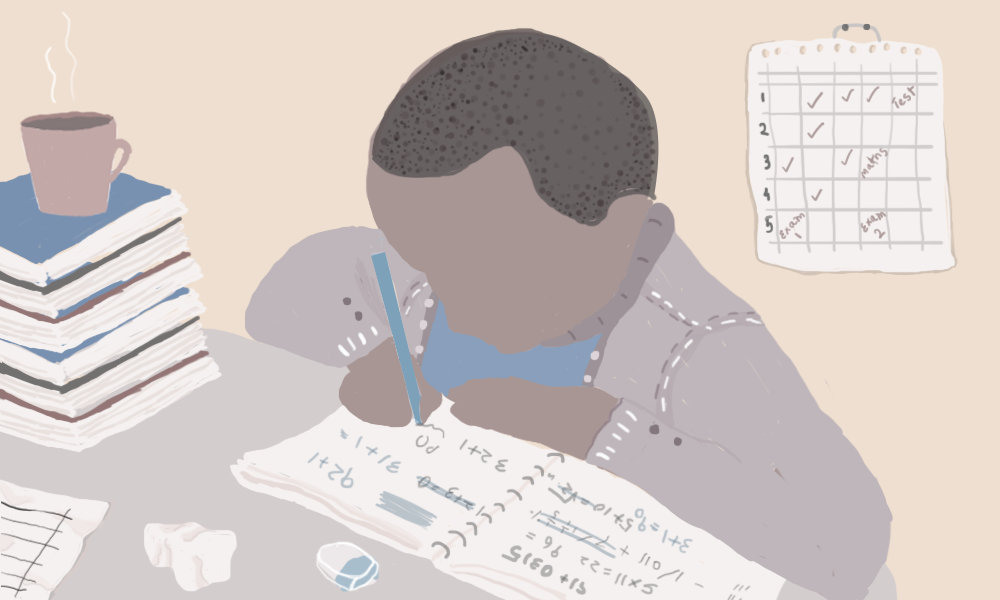 For Toun Banjo, failing her first attempt at clearing one of Nigeria’s most competitive entrance exams, was a temporary setback. The Unified Tertiary Matriculation Examination conducted by the Joint Admissions and Matriculation Board (JAMB) is a requirement for bagging a spot at the country’s undergraduate institutions. Banjo hit the books and tried again after a year and scored 279, paving the way for a bachelor’s degree in geography at the University of Ibadan. “I’m most grateful for the gap year; it helped put things in perspective,” she wrote. “Failures are opportunities to reflect and restrategize. You only lose when you give up.”

While the experience allowed Banjo to evolve and use the extra time to work on her skillset, JAMB can be extremely stress-inducing for many students in the country. “It [JAMB] puts a lot of pressure on Nigerian students. There’s this sort of anxiety…[about] the cut-off marks before you can even actually apply to schools,” Banjo told Re:Set. “It puts a lot of strain.” The exam has been heavily criticized by students and educators for its ever-changing cut-off scores and stressful nature.

For Toun Banjo, taking a gap year after failing her first JAMB attempt allowed her to reflect and strategize. Photo courtesy: Toun Banjo

Many students often end up sitting for the exam more than once which can take a massive hit on self-esteem and a student’s prospects. For the 2019-2020 admission cycle, the board announced that those sitting for the exam would have to secure a minimum score of 160. Additionally, each university can decide its own baseline score for prospective applicants, including different scores based on the course they choose — for instance, medical students need different grades compared to aspiring teachers— adding to the collective confusion and pressure to perform. This means that even if a student scores 160, their chances of getting admission to their university of choice are low if it has a higher cut-off score.

“Students seeking admission into tertiary institutions should be assessed based on what they know and are able to do rather than by scores.”

Not only is the process time-consuming and delays a student’s education, it’s also financially burdensome. Students are required to pay registration fees and bear the expenses for the application form and textbooks, approximately 6,000 naira (~ $16 USD.) After being accused of being a profit-making enterprise, JAMB announced last month that it would slash form fees from 5,000 naira (~ $14 USD) to 3,500 naira (~ $10 USD).

“There have been cases of suicide among students that have finished secondary school and have failed to secure tertiary institution admission after multiple trials [attempting JAMB],” Zam Emmanuel Daniel, a junior secondary school teacher in Abuja, told Re:Set. “Students seeking admission into tertiary institutions should be assessed based on what they know and are able to do rather than by scores from standardized tests.”

The examination board started conducting exams in 1978 and has been marred by controversy over the years such as wrong evaluations in 2016 and confusion over the system in place. It tests students in primarily four subjects including English and three subjects based on the course they intend to pursue. While the maximum score is 400, the minimum requirement has been changed several times since 1978.

The cut-off scores also differ based on the location of universities. “Looking at the variety of these scores as determined by JAMB, inclusion is their primary goal and from all indications, there is significant progress. This is to ensure that the Nigerian child attends any of the tertiary institutions in the country,” Daniel explained. He added that the regions that are considered to be at a disadvantage in terms of educational opportunities such as several places in northern Nigeria have cut-off scores as low as 80 while those in the south and the west (considered to be educationally advantaged) aim higher at 180, a point that creates inequality in access to higher education. He believes that while JAMB is aiming for inclusion and has managed to improve the situation, variations in scores still restrict students from picking schools close to where they hail from instead of a university further away.

Earlier this year, a student attempted suicide after failing JAMB, posting online about what prompted his decision. He wrote he was upset about his JAMB results and wanted to end his life. Fraudulent businesses have also reportedly cropped up in the country in a bid to convince students that they can help them secure admission in their university of choice even if they haven’t scored the required grades. The board, alarmed by this development, began working on a portal that informs young Nigerians  why they didn’t make it to a particular institution as a way to ensure transparency in a chaotic and often confusing system. Despite repeated attempts by Re:Set via phone calls and emails for an interview, there was no official response from JAMB at the time of publication.

For students who don’t clear JAMB, their options are limited and include pathways such as a diploma or a course at the National Open University of Nigeria coupled with a few private universities through alternative exams like The Interim Joint Matriculation Board Examination (IJMBE), a qualifying test for some universities in Nigeria as well as overseas. A 2017 report from Quartz noted that Nigerian universities granted admission to just 10% of all students (approximately 10 million) between 2010 and 2015, highlighting a lack of resources and universities to accommodate undergraduate students in the country. Students can choose to skip JAMB completely and opt for programs abroad, a factor that is proving costly for Nigeria: its economic losses due to students leaving the country to study overseas are as high as half a billion dollars.

Adding to the woes of several students, the examination board has also issued new directives for 2020, asking all test takers to register for their National Identification Number (NIN), a unique identification number which is a mandatory requirement for all residents and citizens in Nigeria. This is aimed at weeding out fraudulent entries, but is causing considerable distress among students scrambling to register for their ID cards, battling long wait times and corruption. “This creates another stress point for students,” Daniel said. “A viable and easier way to obtain this number should be looked into between JAMB and the National Identity Management Commission (NIMC) whereupon a successful JAMB registration, the student is automatically issued a NIN.”

“Education should be a basic right.”

Ani John Nnamdi, a chemist based in Kaduna attempted JAMB four times. His first attempt was in 2008. While he was managed to score beyond the cut-off marks each time, his scores weren’t good enough for his preferred universities. “Writing the exam was…almost a waste of time. That [should not be] the criteria for [securing] admissions,” Nnamdi told Re:Set. “It had a psychological [impact] on me…it was quite stressful. I was lucky, I was mentally stronger…it was not a pleasant experience at all…there [was] no avenue for psychological or emotional support.”

As per Zion Oshiobugie, an educator who runs a primary school for orphans, academic pressure and fear of failure are very real for Nigeria’s students. “Education should be a basic right,” he told Re:Set. “I grew up poor…school unlocked my mind. I told myself…when I come of age, I’ll give that [kind of] education to someone like me.” However, he believes that the Nigerian education system is fraught with discrimination currently, making it inaccessible for many students and not training them to prepare for a competitive exam like JAMB. “There’s no special preparation [from schools]. JAMB is more like an external examination you have to prepare on your own [for],” Nnamdi acknowledged. According to him, internal university examinations are the way out to ensure a fair assessment during university admissions.

Oshiobugie is vocal about how negative the impact of the cut-off scores can be. Recently, a student came to his office, distraught and crying about not being able to pass her exam. Oshiobugie spent over an hour trying to comfort the student, offering support and reassurance. “We’re not happy about the situation,” he said. “[Many] students drop out…or decide not to pursue their dreams because they’ve tried once, they’ve tried twice…[and they give up]. Even if somebody [doesn’t] make their cut-off points, they should be given the opportunity to do what they want to do.”

Stress, Failure and Discrimination: A Look at Nigeria’s Most Competitive Entrance Exam