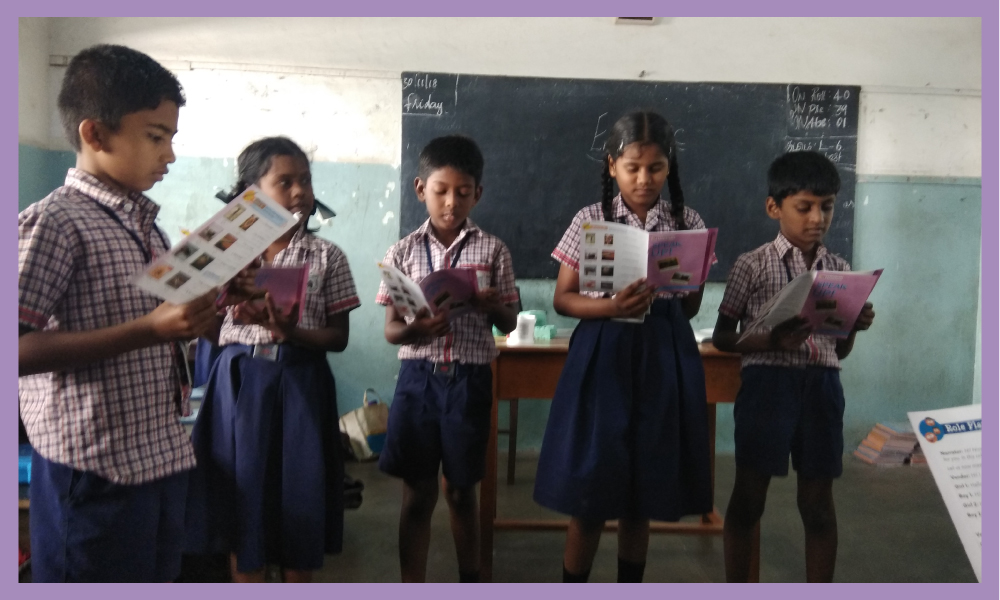 Despite widespread access to education, nearly 73% of children in the third grade cannot read texts as appropriate for their age group. Photos courtesy: ELF Learning Solutions.

India has the world’s largest youth population with approximately 600 million people under the age of 25. This presents both a tremendous opportunity and challenge for a country where the majority of the population still lives in rural areas. It has to confront the mammoth task of providing quality education to all children irrespective of caste and socioeconomic boundaries.

To be sure, the country has made significant strides to universalize education for 192 million children across one million households through government-led initiatives such as Sarva Shiksha Abhiyan (SSA) and the Right of Children to Free and Compulsory Education Act (RTE).

RTE makes education a fundamental right of every child between 6 and 14 years of age and establishes minimum standards for all government and private elementary schools, and under SSA, the government opens schools in places without existing infrastructure, provides additional teachers, emphasizes the education of girls and children with special needs, and integrates technology into classrooms. Government schools can be run by the central, state or local government and they don’t usually charge any admission fees up until grade 8.

As a result, access to government schools has improved considerably in the last decade. Primary school enrollment reached 96% in 2009, with girls making up 56% of new admissions between 2007 and 2013, but despite the provisions, the quality of teaching still leaves much to be desired. 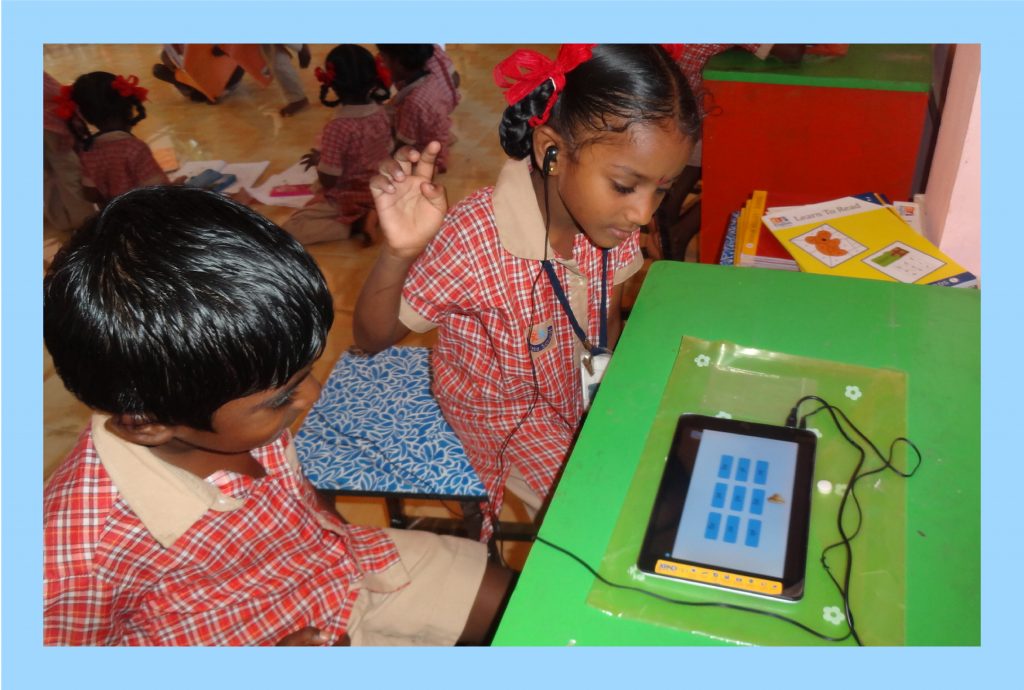 While the Indian government has managed to make education accessible for millions of children, the quality of said education remains questionable.

The latest Annual Status of Education Report (ASER) from 2018, covering over 500,000 children between the ages of 3-16 years in rural India, indicates that only 27.2% of children in grade 3 were able to read texts appropriate for their grade level even though this figure has steadily increased over time.

“Today, we are doing well in terms of school infrastructure, teacher attendance, children enrolment, and attendance,” Chandra Viswanathan, treasurer at AID India and founder-director of ELF Learning Solutions told Re:Set. “The problem is that the…outcomes are not being tracked in a very systematic way. No one is looking at the quality of learning in the schools.” ELF works with government schools to teach English language skills to children across urban and rural areas, while AID India aims to empower communities to become self-reliant by focusing on quality education, healthcare, and shelter.

“No one is looking at the quality of learning in the schools.”

In an effort to retain students, the RTE introduced a “no-detention policy” in 2009 which explicitly prevented teachers from failing students till grade 8. While the policy was recently scrapped under the current government, many have felt that it has inadvertently reduced the accountability of government schools over the last decade in ensuring each student achieves the necessary learning outcomes for their particular grade. “We are often in a situation where students don’t fail till class 8, and then don’t pass in class 9,” the then education minister of the state of Chattisgarh remarked in 2015. As a heavily forested state, Chattisgarh lacks proper educational infrastructure and ranks among the bottom 10 states according to the Educational Development Index, with an overall literacy rate of approximately 70%. 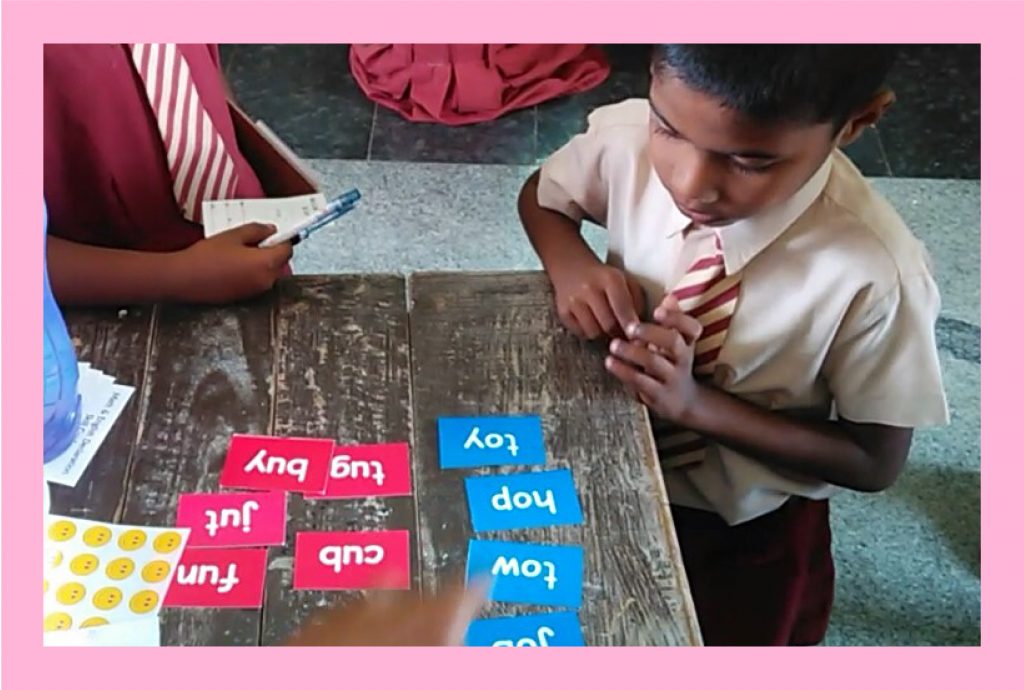 The lack of accountability from government schools is pushing low-income families to opt for private schools at a higher expense.

Nirmala Devi, a mother of two children, works in Mumbai as a maid to support her family who lives in a village located three hours outside of the city. “Nothing happens in the government school. I have one child in class 1 and another in class 4,” Devi told Re:Set. “The teacher doesn’t pay any attention to the children. The children just play around and the teachers pass them, but the kids don’t learn anything new.”

Some parents who are able to save a basic level of income are choosing to send their children to private schools instead or are paying for additional tutoring classes outside to supplement what is being taught at the government schools.

“The system is losing the confidence of parents in rural areas very quickly,” Viswanathan said. According to her, parents feel they’re unable to ask questions in the government system and can’t demand that their kids acquire even basic skills such as subtraction or reading a grade 2 text. “They want their children to learn English which is not offered in government schools. Since parents are paying fees in the private school system, they feel they can ask questions and demand accountability,” she told Re:Set.

“The system is losing the confidence of parents in rural areas very quickly.”

Kishore Lal, who works as a driver and has a daughter enrolled in grade 2 at a government school in the suburbs of Mumbai, echoes Devi’s sentiments about the indifference to high-quality learning in government schools. “Government schools provide free education and schooling, which is good, but I pay for extra private [tutoring] classes,” he told Re:Set. “What they learn there [in school] isn’t enough. Each classroom has 40-50 students. What will they learn?”

What can be done?

However, government schools in Delhi have been the anomaly and show what is possible with the appropriate political and financial commitment.

One of the first steps the local government took was to focus on training and pedagogy —  teachers and principals from over 1,000 Delhi government schools have attended workshops in Singapore and Finland.

Broader access to teacher training opportunities has been supplemented with several other steps to boost the quality of education over the last three years. A “happiness” curriculum has been introduced, fresh coats of paint adorn the walls of several government schools, parent-teacher meetings have been made mandatory, and infrastructure has been revamped across more than 50 model schools.

All of this has not come without expenses — the local Delhi government allocated approximately $1.9 billion USD to the education sector last year. The investment has clearly benefited students in Delhi government schools, as they performed better than students in private schools on a major nationwide examination which was held recently. The overall performance was the second best in the country.

However, since state governments are responsible for education, each state in India faces its own challenges. There are wide variations in literacy rates and other educational outcomes across the country: Kerala and Tamil Nadu stand out, while Bihar, Uttar Pradesh, and Rajasthan lag behind the national average of 74%.

In Tamil Nadu, ELF Learning Solutions has equipped classrooms with audiovisual materials and tabs that are pre-installed with graded English lessons, which allows students to learn independently and focus on the skills that require the most attention. Since individual students learn at their own pace, technology can assist in remedial learning by acting as a customized teaching assistant.

Technology by itself, however, is far from a panacea.

“State governments and pretty much everyone else is jumping on the bandwagon of smart classes integrating information communication technology (ICT),” Aditi Bhowmick, a public policy professional and graduate student at Princeton University, told Re:Set. “However, we must keep in mind that half of the government schools do not have electricity. So, you also have to think about how technology can be tailored to fit your context,” Bhowmick has visited more than 160 government schools across India as part of her research into the country’s education sector.

In most cases, introducing ICT solutions simply isn’t enough to bring teachers and school administrators on board in rural areas.

“Let’s say you are rolling out an ICT intervention in Chhattisgarh, it is very possible that you have procured all the hardware and implemented your ICT intervention, but when you go for a monitoring visit, you will find that the materials are all locked up,” Bhowmick said. “Why? Because they are afraid of kids coming and breaking the equipment. Meaning you have to get the people on board and ensure technology is used for its intended purpose. Pedagogical interventions do not automatically follow from adopting technology.”

Given the sheer size and socioeconomic diversity of the country, it’s an uphill battle for India when it comes to revamping and improving its education system. It requires a change in mindset and the cooperation and accountability of parents, individual states, policy makers and educators to provide quality education for its citizens. When Chandra first started working in the education sector in the late 90s, “the big push was enrollment for all,” she said. “No one was looking at quality. We need to now have a renewed focus on improving the quality of learning if we are to meet the challenges in the education space in a sustainable way.”

Mohit Nair is a researcher and project coordinator dedicated to addressing critical public health challenges in India. Through research and advocacy, he hopes to raise awareness around global health equity and human rights. Mohit holds a MPH from Harvard’s Chan School of Public Health and a degree in Biological Sciences from Cornell University.

Patience, Kindness and Spontaneity: Things I Learned From My Teachers
Give Your Child Direction, Not Just Instructions

‘Nothing Happens:’ the Lack of Accountability in India’s Government Schools