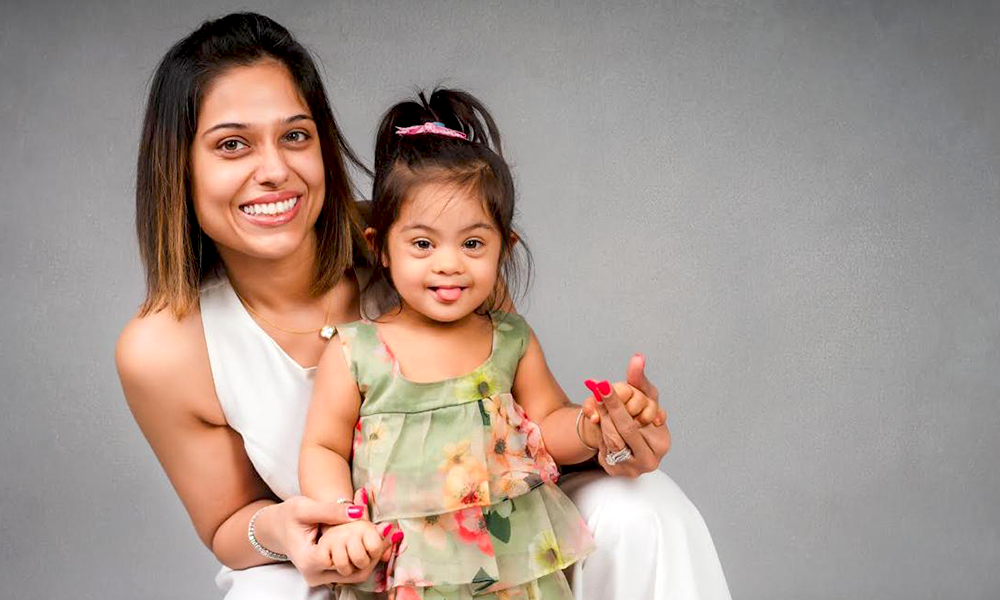 Pooja Khanna believes that blogging about her life with Norah has helped create a new perspective for people who aren't aware about Down syndrome. Photos courtesy: Pooja Khanna

With her sleek, short hair, big smile and effervescent demeanor, Pooja Khanna is as engaging in person as she is online. Her 2-year-old daughter, Norah, the star of Khanna’s Instagram, plays nearby with her father, Vivek Mittal, in their plush Mumbai home. Khanna’s social media presence is dedicated to reframing the narrative around Down syndrome. She candidly admits that her initial reaction to her daughter’s diagnosis was a mixed bag of emotions that she found herself unprepared for.

Growing up, Khanna studied in a Mumbai-based school that had a separate special needs section, but students of all abilities were never encouraged to mingle and play together. “We [were never] taught to be inclusive or told that we should be around each other in spite of having that opportunity,” she recalled. She believes that if inclusivity had been inculcated when she was young, welcoming her child would have been a much easier process for her. Recently, she went back to her school and spoke to the authorities to convince them to create a more inclusive environment.

After receiving guidance from others in her early days as a parent, Khanna now gives back to the parenting community by providing support and advice.

Khanna’s decision to become a vocal advocate for Down syndrome came from the need to find a community and build a support system for her child. “[Vivek and I decided] that we were going to speak about it because we needed to reach out to more people,” she told Re:Set. Writing about life with Norah made it easier for Khanna to find others in similar situations. “The whole Down syndrome community is amazing, I got help from different parts [of the world]. Their stories and the strength that you gain from them looking at their lives, I wouldn’t have gotten that if I wouldn’t have reached out.”

“The whole Down syndrome community is amazing, I got help from different parts [of the world].”

After receiving guidance from others in her initial days as a parent, Khanna now gives back to the parenting community by providing support and advice; “Sometimes, it is people who are planning to adopt or people who have just figured out that their kids have Down syndrome, and they want to know what next.” However, it is not always an easy task, she commented, recalling an incident where a friend and her had to convince a woman whose newborn had been diagnosed with Down syndrome to not give her child up.

It is often the stigma associated with having a child who is “different” that pushes parents into considering such decisions, she reflected. Both Khanna and Mittal acknowledge the widespread lack of awareness about the condition, especially in India. Speaking about their experience, Khanna said, “The only difference [with a child like Norah] is that we take them for therapy because they require it. She was born with low muscle tone, she needs to strengthen it to get to where she’s going, [but] it’s just part of her life, it’s not her life.” Both of them pointed out that many people don’t know that therapy is usually available free of cost or at subsidized rates at government hospitals across India.

With the aim of building awareness about the condition and to improve representation, Norah’s parents let her model for fashion shoots.

Mittal believes that the first thing that needs to change in the special needs ecosystem, especially in the Indian context, is the sensitization of doctors. Speaking about his own experience, he urged medical professionals to develop a reassuring presence, as opposed to overwhelming parents with information. “Doctors are central [repositories] of information. [They] need to give you a roadmap, and [they ought] to be [the ones] that make you feel like it’s going to be OK.”

“If I’m getting an opportunity to show her face to [improve] diversity, I’ll put her everywhere.”

After Norah’s birth, Khanna and Mittal met with a flurry of doctors and the hospital also provided a consultation with a psychologist. Khanna reflected that having to speak with a psychologist after Norah’s diagnosis made her uncomfortable because the human touch was missing, as it was purely an exchange of information. After their third visit, they opted out of speaking with the psychologist. “Get a team on board with a few parents who can talk to you about their experiences,” Khanna suggested, adding that the relatability factor and the lived experiences of those families can be of meaningful help to newer parents.

With the aim of building awareness and improving representation, Khanna and Mittal have opted to let Norah model for different fashion shoots. It was initiated by designers themselves who reached out to Khanna first. “If we want to showcase inclusivity, we have to put a face to diversity as that is the only way. If I’m getting an opportunity to show her face to [improve] diversity, I’ll put her everywhere,” said Khanna, adding that Norah loves these shoots and enjoys the experience. Mittal noted that parents of children with special needs are still very reluctant to be open about their children and bring them out into the public. “Take your children outside! Most of the time, other people don’t [view them with] stigma. We judge [our own children] before anyone else judges them,” he said, observing that it needs to change. While this is valid advice, it may not always be possible for children with special needs to access social spaces due to a lack of inclusive infrastructure, facilities that meet their special needs and financial resources that can give them access to aids such as wheelchairs or cars with ramps.

Like all parents, the mental health journey for the Khanna and Mittal has had its fair share of ups and downs. However, Khanna believes that being open about it online has made it easier to navigate through them. For her, writing about her life and her experiences with Norah, helps her feel lighter and deal with her emotions better. From glimpses of Norah working hard at her therapy sessions to emotional videos describing her parenting journey, Khanna believes in being completely transparent with her audience.

Mittal told Re:Set that in this process of blogging their life, Khanna has built a strong network of champions for Norah and also played a role in creating a new perspective for people who weren’t aware of what life with Down syndrome looked like. “Even if it hasn’t changed their minds, it has planted that seed somewhere that maybe [the condition] isn’t so bad,” Khanna explained.

Currently, Norah attends a mainstream school alongside regular sessions that cover speech therapy, physiotherapy and occupational therapy. It was a conscious decision because her parents believe that [children with special needs] should be included because they learn a lot from their peers and vice-versa. “Exposing children to differences and teaching them empathy from a young age is the key to creating a more inclusive society,” Khanna emphasized.

Why are India’s Girls Being Enrolled In Government Schools and the Boys in Private?
How This Mompreneur Turned Her Sari Influence on Instagram Into a Successful Business

Reclaiming the Narrative Around Down Syndrome