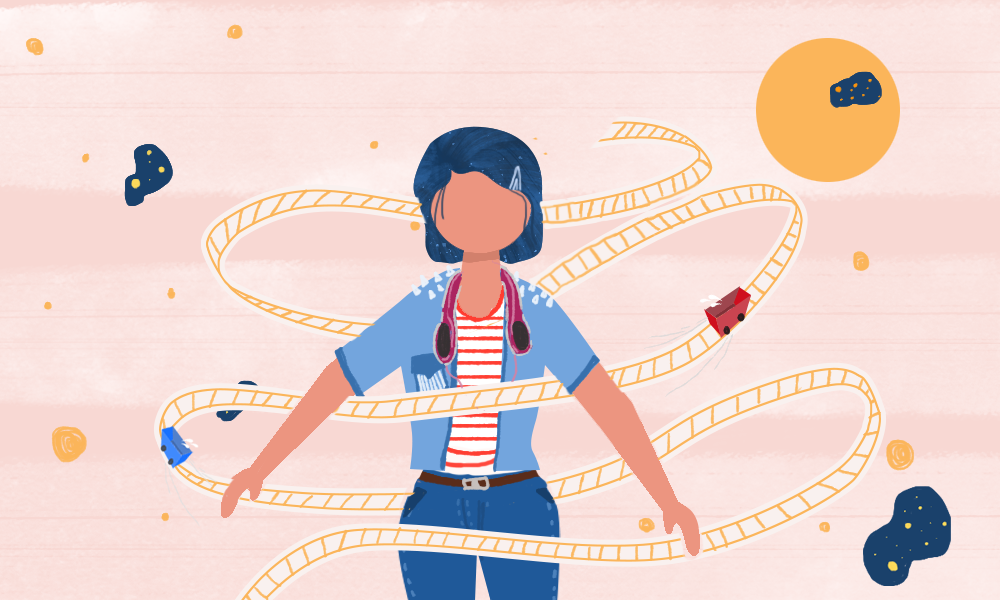 High school is a topsy-turvy ride for many. You go through a plethora of ups and downs as you try to figure out what you want to do next, battle braces and acne, deal with mounting peer pressure and try to pursue your passion. We asked people from around the world to re:flect on their time in high school and tell us what they learned.

When race car driver Sneha Sharma ran for school council, only one person voted for her. Photo courtesy: Sneha Sharma

Mumbai-based Sneha Sharma has had a multi-faceted career as a commercial pilot and Formula 4 race car driver representing India. “I was an overweight teen [in high school]. I’d started competitive racing and was training to fly. I’d be called weird names in high school because of my weight,” she told Re:Set. “[But] these days, I’m comfortable talking to thousands of people about my journey.”

Battling the odds, she also ran for school council. “Back in high school, when I wanted to be class president, only one person voted for me. And now? I’m…an Indian female racer who’s competing in the international circuit. Since I spent so much time preparing for races in high school, I did get discriminated against, as people wondered why I wasn’t actively participating in social events [at school]. Life was really difficult all those years ago, but the one person who did vote for me in class — I hope he’s proud of me today.”

Baemisaal, a popular artist and illustrator from Lahore, Pakistan, told us about her experience of not fitting in, while in high school. “For me, school was pretty terrible. I was always the rebel, the one who broke the rules and got punished for it. My teachers literally told me that I’d get nowhere in life. I got bullied from grades 4-7. Then, I switched schools because I had no friends and my grades were suffering. When I shifted back to the same school in grade nine, I was bullied again for half a year.”

In school, I was always the rebel, the one who broke the rules and got punished for it.

But she learned to roll with the punches. “I realized it [the bullying] was because I was different and it was just easier to push me around. I was nice and never fought back,” Baemisaal reflected. “I tried out for the popular drama club in my school and got in after the first audition. I spent the rest of my time in art class. Those are the only fond memories I have of school. What came after is that I stopped being afraid and started believing in my talent and skills. A lot of my seniors came to defend me in front of the girls in my class and stood up for me when I didn’t think anyone would. They would sit me down and tell me how great I was. That’s something I really took back and applied to myself.”

In high school, you go through lots of ups and downs as you try to figure out what you want to do next.  Illustration by (c) Reset Fest Inc, Canada.

“In the end, we were all just a bunch of high school kids, still growing up. Sometimes I wonder if I’d be who I am today if I didn’t go through all of that. [In high school, I spent my time] building a thicker skin, learning to not waste my crying over people who wouldn’t matter in another five years. Who knows? Honestly, I just remember hating people who made me feel like that. I don’t wish them any harm but I do wish they changed. Became better somehow. Teachers included, what was their excuse?” Baemisaal added.

Re:Set also spoke to Mariah Idrissi, a model and creative consultant from London. “[My] best memories from high school involve playing football in the car park and running away from the teachers when they’d come out and yell at us to stop kicking the ball around their cars! Difficult memories are about getting into a lot of fights and feeling anxious for the next few days, [worried] that anyone could pop up on you at any minute,” Idrissi re:flected.

“High school really taught me that confidence will get you far. I also never had a group of friends, but just groups of people I would hang out with at school. I would only have one or two true friends outside of school. That hasn’t changed much in my life, and I think that’s what has kept me focused, away from drama,” said Idrissi, when asked about what life lessons she took away from high school.

It was in high school where photographer Kadir Khan learned to not give up on his dreams. Photo courtesy: Kadir Khan

“High school is what makes you. Although this statement is a cliché, it holds so much truth in it,” Karachi-based photographer Kadir Khan told us. “I made some of my best and worst memories of life [in high school]. Lots of people claim that high school was the best time of their lives. This doesn’t mean that it was a bundle of all things good. Although it was in high school that I explored my interest in art, there was still immense exam pressure and long classes [to attend].”

Khan felt that his creativity wasn’t particularly encouraged while there. “Extra-curricular activities were a part of high school, but there was no major recognition for arts, so I had to make my way through high school without losing vision of what I really wanted [to do],” he told Re:Set. “High school taught me to never give up on my dream, and I chased it until I became who I am today.”

Editor’s Note: An earlier version of this story included a quote from Sneha Sharma stating that she is the only Indian female competitive driver in the international racing circuit. However, Sharma is accompanied by  other Indian female drivers who are leaving their mark in competitive racing. We regret the error.

The Re:Set Guide to Creating a Suicide Prevention Policy in School
‘Why Are the Trees Falling?’ How One Dubai School is Prioritizing Climate Literacy