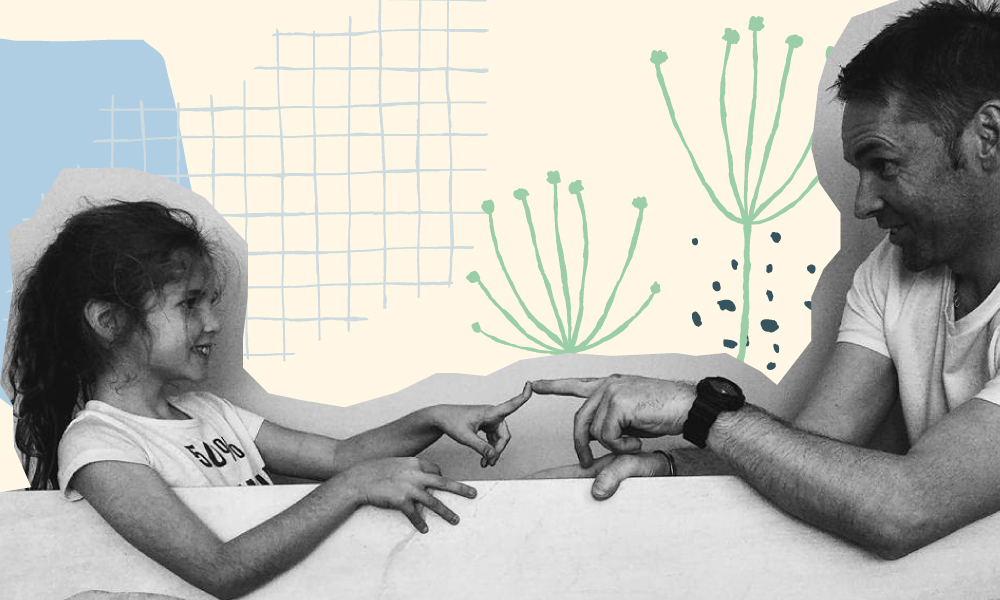 Bryan and his ex-wife ensure that their daughter Eireann spends the week at both the parents' houses so she has both their presence throughout. Photo courtesy: Jason Bryan

On a relaxed day when there are no classes to rush off to, 8-year-old Eireann Bryan settles down for a movie with her dad in their home in Dubai’s Arabian Ranches area, savoring Pringles chips and dessert as a special treat. Her father, 43-year-old Irish entrepreneur, Jason Bryan is a single dad. He’s been separated from Eireann’s mother for two years and says he’s on a quest to learn to see the world through his daughter’s eyes.

“I believe Eireann feels comfortable talking to me about anything. She will sometimes insinuate that she wishes her mum and dad were still together, but when we explain it to her she seems to understand it’s for the better,” Bryan said.

He stills shares parenting responsibilities with his ex-wife and they make sure Eireann gets to stay at both their homes during the week, spending most weekends with her dad. “We both focus on Eireann and try to ensure that we are amicable at all times when around her,” he told Re:Set.

Elsewhere in Dubai, every Friday afternoon Junie Sorsano, a manager at a travel company, gets on a long-distance call with his daughter, Angela. Sorsano is 39 with short spiky hair, a friendly demeanor and is well-known in the Filipino community for making videos that appeal to viewers in Dubai and abroad. He moonlights as a vlogger in his free time, offering pointers for traveling in the UAE and shares inspiring stories from the emirates.

He’s a single dad to his 12-year-old daughter who lives with her paternal grandparents in the Philippines.

“She is my life now,” Sorsano told Re:Set, explaining that Angela relies on him for emotional and financial support and even with help on her homework. “The education system is advanced,” he said, joking that he has to teach himself concepts from Angela’s assignments before he can help her.

If they can afford it, single parents in the city have the options of turning to live-in nannies or sending their child to daycare or babysitting centres after school; opting for professional help while balancing full-time jobs with single parenthood.

“I co-parent with her mum, but I tend to be on hand whenever needed.”

However, freely available resources or support groups for single dads to help them navigate the struggles of parenting are scarce. They are painfully limited to groups online on MeetUp and Facebook. “We seem to be a rare breed,” Richard Pavitt, another Dubai-based single father to 7-year-old Jake, told Re:Set. The event director for DMG Events said he hasn’t reached out to support groups just yet, preferring to opt for a nanny while he’s at work and exploring the city with his son in his free time.

Bryan quit his job as a finance director for a multinational company and decided to start his own business in a bid to spend more time with his family before the divorce. “I was totally uninspired and felt my life was slipping away, and opportunities to witness my daughter grow were few and far between,” he told Re:Set, explaining that he wanted Eireann to feel inspired by him and his choices. The single dad prefers to not hire a nanny, and has the option of working from home where he can be with his daughter instead.

“Working for myself is a 24/7 commitment, but with proper weekly planning it helps ensure I am more flexible with time…I cook for Eireann every evening she is with me. We have dinner together,” Bryan said. “I get to spend a lot of time with her as a result. I co-parent with her mum, but I tend to be on hand whenever needed, such as school runs or unplanned sleepovers.” 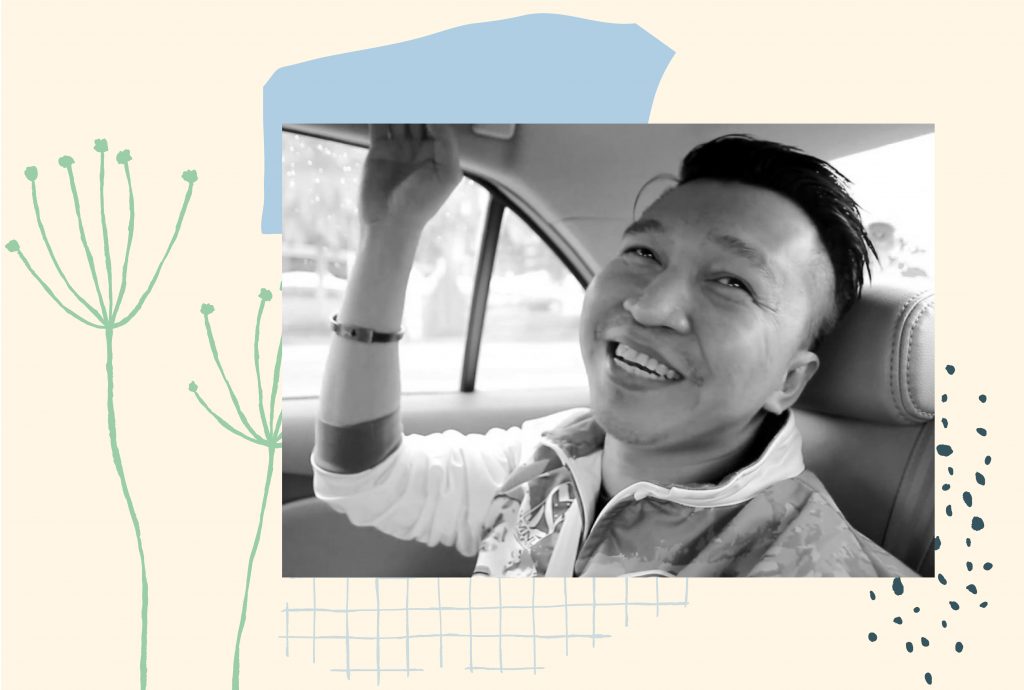 Sorsano finds a way to long-distance parent his daughter while making time for his work and himself. Photo courtesy: YouTube/BuhaySaDubai

As a single parent, handling financial pressure and raising a child can be difficult and is no mean feat. “I’ve pretty much always been the sole income provider since we moved here and it has been a huge challenge. I’ve had to avail loan facilities many times to ensure school fees and rent got paid.” Bryan, who has lived in Dubai since 2011, said. “In the later years, her mum started working and it took pressure off a bit, but not enough to make a real difference.”

Pavitt echoed his sentiment. “School fees, nanny fees and general entertainment are very expensive. When you add in football classes, holidays, it’s almost impossible to save but you just have to compromise and do the best you can,” he told Re:Set.

Life’s not easy for Sorsano either. Saving up for his daughter’s education, providing for his family and living away from his family is a painful but necessary affair. He often misses important events in his daughter’s life because of work and financial constraints and goes back home once a year for Angela’s birthday celebrations.

“If you don’t like your job, you can’t quit right away,” Sorsano said, adding that he stays away from excessive spending to save money and send it back home to his family. The single dad, who has been separated from his wife for the last eight years, is also often forced to confront difficult questions from his child such as “If you love me, why are you not here?”

The last year-and a-half has also been difficult for Eireann as she has had to come to terms with her parents’ divorce.

“Not everyone’s parents are divorced and she gets asked about it a lot. Her response is that she…doesn’t want to talk about it as it brings back sad memories,” Bryan said.

“That response makes me cry every time I learn that she has said it. I wish it was different for her. She’s had to grow up too fast,” he told Re:Set.

According to Evelyne Thomas, a Dubai-based relationship therapist, divorce affects a family as a whole and it’s important for parents to put up a united front for their children. “Good communication will show the children that even though their parents are divorced, they are both involved in the upbringing of their children…and children have fewer chances to play one parent against the other,” she told Re:Set.

She thinks it’s especially difficult to stay strong in front of a child. “One of the parents might be feeling hurt and resentful about the situation and might not be up to being the happy parent children would like to see,” she said.

Pavitt considers being in Dubai a blessing as a single parent. “Being a single dad [here] is probably easier than anywhere else in the world. I’m lucky enough to have help at home in the form of a nanny who adores my son. It’d be far harder in most other countries as I just wouldn’t be able to afford the level of help I receive here,” he told Re:Set.

If you can afford it, hiring full-time and part-time nannies to look after children isn’t out of reach in the UAE. Agencies offer nanny services and even handle flight tickets, visa formalities, medical tests and health insurance. It’s also possible to directly find a helper. However, parents are expected to pay at least Dh3,500 to Dh6,000 a month for help, not including additional expenses such as flight tickets and medical tests. This can be considerably harder and unaffordable for single parents who are struggling to get by on only one source of income.

However, Pavitt explains that the onus of responsibility of caring for a child ultimately falls on the parent. “Obviously help is only that — help. Once I get home from work, it’s all hands on deck with playing and catching up with his day,” he said.

Thomas thinks that single fathers may find it especially challenging to raise daughters. “They worry they will not be able to listen without trying to ‘fix’ their daughter’s situation,” she said, explaining that most fathers are torn between being protective and allowing their children to learn on their own.

Sorsano is a long-distance parent, but he says he leaves no stone unturned to reach out to his daughter and makes himself available whenever she messages him.

Sorsano also bought Angela a laptop and secured an internet connection in their home in the Philippines to ensure hassle-free communication. He wants Angela to talk to him about her life, her days at school and share everyday struggles and the bigger, more complicated dilemmas of growing up. Sorsano’s ex-wife is married now with three kids of her own, but she still visits Angela and attends school events.

“Once I get home from work, it’s all hands on deck.”

According to Thomas, whenever the father and his children are close to the paternal side of the family, an aunt or a grandmother can act as a female figure in the child’s life such as in Sorsano’s case.

Sorsano wishes there was more support, free counseling and resources available for single fathers, though. “I don’t know how to deal with kids growing up,” he said.

“My daughter is the most important thing in my life, and I work hard to make sure she knows it,” Bryan told Re:Set, saying that he turned down more cost-effective options and chose to rent a villa to give her more room to play, a garden and a chance to invite friends home for sleepovers.

Bryan is willing to test his boundaries in order to be a good father. “If I have to, I will also play dolls with her, which is probably something her mum would be more comfortable doing. I’ve had to learn to be a kid again,” he said. Bryan also emphasized that he’s had to learn to let go of his worries whenever his daughter is with him.

“If raising girls, single fathers might be worried that they do not understand and can’t cope with their daughters, they might therefore avoid conversation,” Thomas said.

Pavitt tries to take it easy and make time for goofy antics and father-son bonding time. He said that he makes it a fun home environment and includes tickle fights, Playstation smackdowns and general tomfoolery in their days. He said, “Being two males, we are very active and more prone to boisterous fun and I wouldn’t have it any other way.”

Five Ways You Can Teach Your Child Empathy
‘Nothing Happens:’ the Lack of Accountability in India’s Government Schools

‘We’re a Rare Breed:’ Single Dads in the UAE Share Their Experience