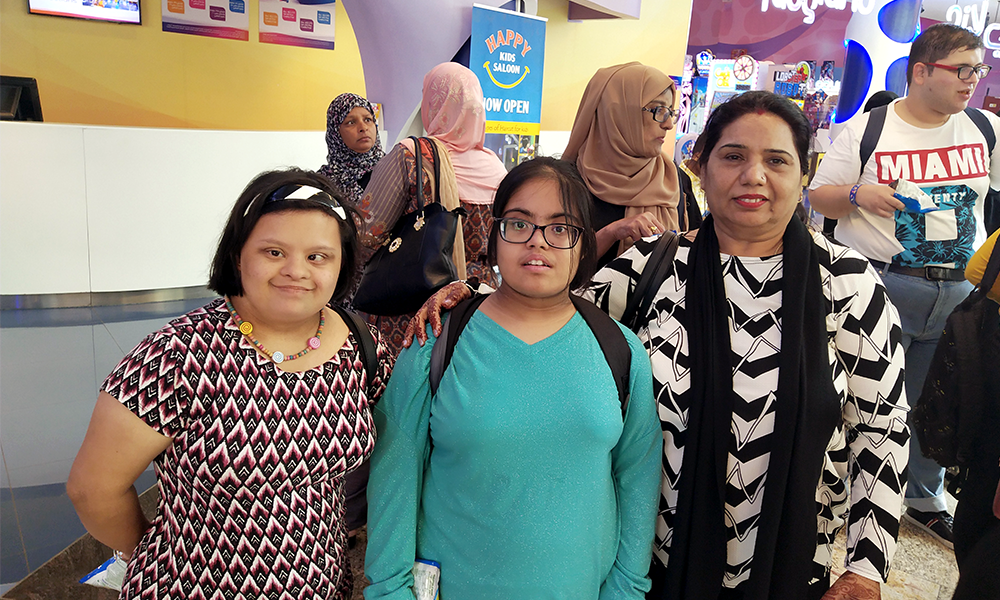 SFS, a Dubai-based initiative, met at a gaming arcade earlier this month to kick off the summer holidays.

As Rinkita Samtani held my hand on a sweltering Monday afternoon, we braced ourselves for the ride high up in the air, feeling the gust of wind on our faces. Rinkita closed her eyes and sat back in her seat, allowing the moment to sink in. The theme-park style ride occasionally triggered her with its constant pace and speed. She coped by rapidly moving her arms up and down. Despite those brief moments of confusion, she sat on the ride two times in a row, enjoying herself throughout.

Rinkita, 19, is on the autism spectrum and is a part of the Dubai-based initiative, Special Families Support (SFS). We were at a summer camp activity organized by SFS, cruising around Fabyland, a gaming arcade in Dubai Festival City. The atmosphere was welcoming with staff members and volunteers joining to ensure all participants felt at ease. The arcade was everybody’s playground. “The smiles [on the kids’ faces] is the best thing you see,” Meena Noronha, coordinator, SFS, told Re:Set. “Our main intention is to give them [the kids] a taste of everything.”

“The smiles [on the kids’ faces] is the best thing you see.”

The support group for families of children with special needs meets regularly every summer, exploring different activities such as ice skating and swimming. For the activities, the shuttle buses have been provided by School Transport Services (STS) for the second year in a row.

“It is very difficult for one family to go and do some kind of activity,” Noronha explained. For the parents at SFS, being together during the summer months is empowering as they find ways to keep the kids entertained. Many of them are expats living away from their extended families and SFS offers much-needed respite. “We look out for each other …and we get the strength from one another,” Noronha added. Her son, Calvin, 22, is on the autism spectrum and loves the events. “My son is the first one to get dressed and ready,” Noronha quipped, describing what every summer camp outing is like for Calvin. She feels a sense of contentment while planning the events. “These children respond so well! They come and hug me at every event [and say], “Oh, I love you.”

Rinkita Samtani with her mother at the meetup.

Summer camps have a huge demand across the world. They allow children to socialize and tread on uncharted territory. Unconventional camps are everywhere. For instance, Potterheads in the U.S. can head to camps that revolve around the world of J.K.Rowling’s Harry Potter. Or they can opt for old-school getaways such as YMCA in Ontario, Canada that offer an inclusive environment for all kids. Need more quirk? There is no dearth of options in that department: from a camp specializing in dinosaurs in Florida, U.S.A. to another revolving around parkour in Dubai to a camp committing itself to eco-friendly living and teaching kids the benefits of solar energy in England, U.K., there is plenty to choose from.

These activities are usually more than just a mini break. At Ekadaksha, a special needs learning center in Chennai, India, its founding members viewed summer camps as opportunities to identify a child’s individual strengths. “For us, when we do summer camps, it’s not only about activities,” Archana Joshi, educator and co-founder, Ekadaksha, told Re:Set. “In [those] ten days, we need to cater to [the] needs of that particular child.” While the center organized its first summer camp in 2011 and continued with the initiative for a few years, they decided to take a break after realizing that many kids didn’t show up for the camp despite a lot of curiosity around the events.  “When we first started summer camps, there were not many summer camps for children with special needs [in India],” Joshi reflected. She noticed that it can be tricky for parents to let go because they feel overprotective. Will their kids be safe? Will they get hurt?

Ekadaksha, a learning center in Chennai, India organized several summer camps for kids with special needs at a time when the concept was unheard of. Photo courtesy: Archana Joshi

The educator understands the parents’ dilemma. However, she thinks summer camps can be beneficial and let them pick up new skills. For one of their summer activities, Ekadaksha invited a classical Indian dancer and an art therapist to teach the kids, allowing them to explore the freedom of movement. “I think summer camps should just…be [available] for all children to have fun,” she said. “Summer camps will do them some good, you know?”

Also read: The Case For Starting School Later in the Day

While immensely exciting, summer camps are not always fun and games. SFS coordinators provide camp activities free of charge and occasionally struggle to find sponsors. Sometimes, kids get sick on the trip. “We don’t know what will trigger them,” Noronha explained. “We have to be very calm. Sometimes, the noise [levels] have to be very low.” They don’t get bogged down by roadblocks and have tweaks to cope with challenges. For instance, whenever they head to the movies, they ask staff members at the cinema to keep the lights on and doors open. This makes it easier for many kids to feel comfortable or take breaks.

Savitri Kisani with her son, Krishna. They have been members of SFS since its inception.

Rinkita’s mother, Kajal, feels content when she meets other parents during the activities. Volunteers at the camps allow parents to take breaks and unwind together, catching up on each other’s lives. “SFS is super supportive. A volunteer is taking care of Rinkita right now,” Kajal said, smiling. Another mom, Savitri Kisani has been a part of the group since inception nearly two decades ago. She loves the events for their endless possibilities.“These events are important for these children to socialize, to come out of their comfort zone and be a part of the community,” she said.

Summer camps also make it easier for children to experiment. Noronha spoke about the kids’ new obsession: ice skating. While initially hesitant, seeing their peers try it out was motivational for the kids who decided to give it a go and put on their skates. “Many of our kids with special needs learn from others,” Noronha acknowledged. “When we go together, it becomes very friendly …we take care of each other’s kids as our own.”

These Summer Camps Are Setting New Standards for Inclusivity