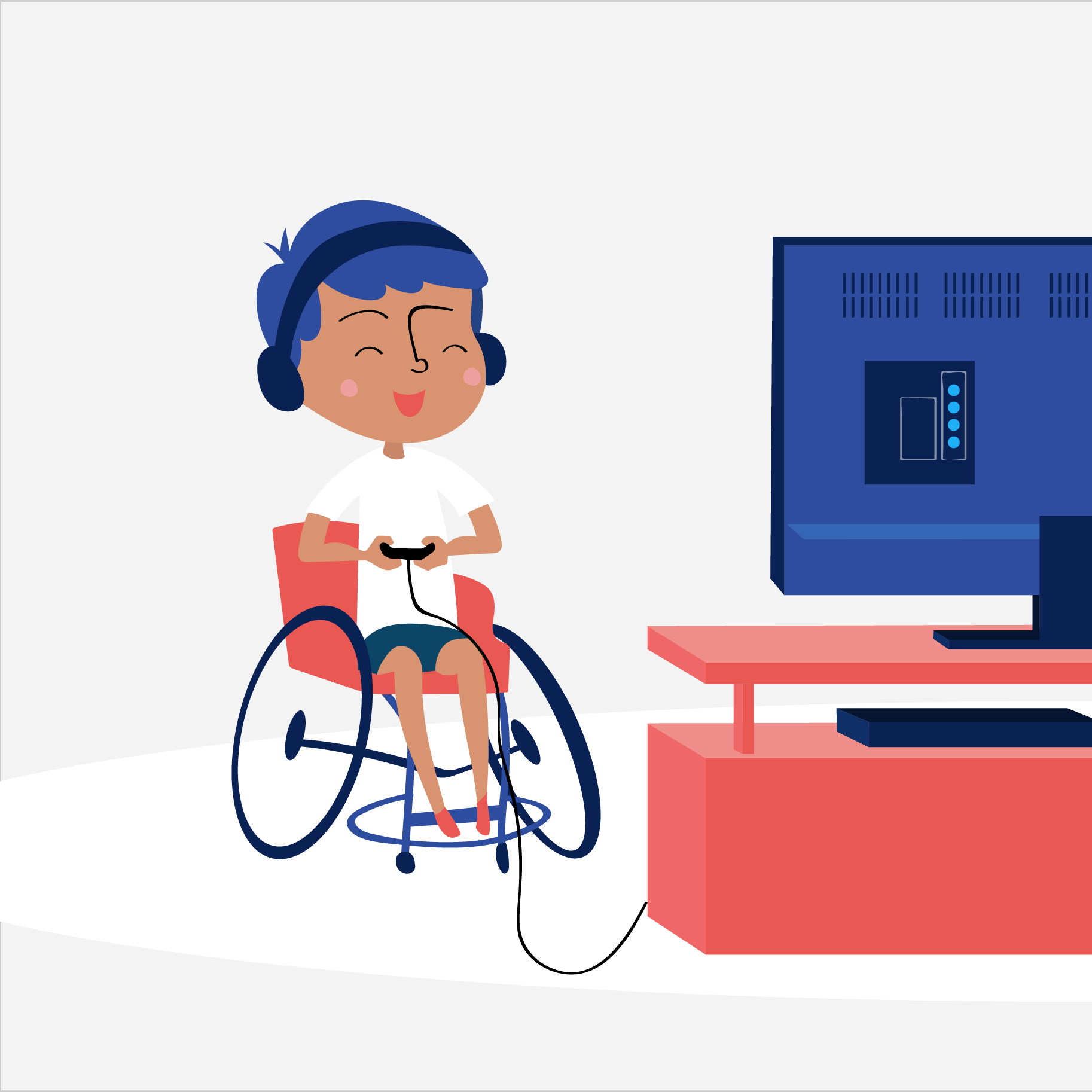 Gaming gives children the opportunity to thrive and challenge themselves from the safe space of their own homes. Illustration by (c) Reset Fest Inc, Canada.

In a moving virtual reality chat that went viral earlier last year, while a Korean man took on the avatar of a bird in a game, he spoke about his gruelling time in the military. “I had a brother who died of cancer…so life is quite important to me,” the former ambulance driver said, adding that he tried his best to save people who were in pain. Viewers reached out to offer support to the Korean video game player in huge numbers, eventually helping him land a gaming job in Los Angeles. Video games can help bring people together, even serving as a safe platform for kids with special needs. Gaming has a massive fan following among players in the UAE with a whopping number of active gamers in the region.

However, this isn’t a danger-free zone. Last year, the WHO classified “gaming disorder” as a mental condition, characterized by impaired control over gaming that takes precedence over other daily activities.

Two jarring examples stand out. Pokemon Go and Blue Whale have grabbed multiple headlines over the last few years. While the former’s augmented reality concept won over gaming enthusiasts, Blue Whale’s mysterious list of extreme challenges encouraged players to commit suicide and had parents concerned around the world. Both the games have led to fatalities including accidents and deaths. In response to the risks posed by the Blue Whale challenge, the Telecommunications Regulatory Authority banned the game in the United Arab Emirates (UAE).

However, when done right and in moderation, video games can be helpful for children with special needs in a number of ways. By picking up a video game controller or sitting in front of their computers, they can learn new skills that will help them thrive in their everyday lives.

Children of determination can pick up social skills through gaming that they can use in their everyday lives. Illustration by (c) Reset Fest Inc, Canada.

“For children of determination, video games can offer a way to develop many skills in a safe, supportive and overall fun space,” Adam Griffin, Head of Occupational Therapy at Autism Rocks Support Centre, told Re:Set.

According to Griffin, gaming can help improve communication, vision, motor skills, organization, social skills and other executive functions. An added benefit is that this can happen in an environment that’s comfortable for the child. “I will often use cognitive training games such as Lumosity as an icebreaker….to show my students how they can improve any skill with practice and determination,” Griffin said.

“Gaming has helped bridge the gap between his neurotypical peers and himself.”

The Asperger / Autism Network cites the massively popular multiplayer online role-playing game World of Warcraft as an example of a beneficial video game for children with special needs. According to them, the game aids children, especially those who fall on the autism spectrum, in developing their social skills since it requires players to communicate with each other while gaming. While communication can be challenging for kids with special needs in their everyday lives, it’s much less threatening when done in in front of a screen because there are no face-to-face interactions, and it allows children time and space to communicate at their own pace.

11-year-old Oscar Guy has high-functioning autism which makes it tricky for him to easily connect with his peers. “Gaming has helped bridge the gap between his neurotypical peers and himself as they now have a common interest,” his mother, Andrea Guy, told Re:Set. They discovered Oscar’s love for gaming when he was seven years old and was gifted an Xbox. According to Guy, her son’s love for certain games has made it easier for children of his age to include him in conversations at school and in playdates.

Children with autism spectrum disorder (ASD) may have difficulty developing language skills, as well as understanding what others say to them. World of Warcraft and other games like it, such as Minecraft, help eliminate some the stress of communication for these children because they don’t have to worry about coming up with a topic of conversation on their own. Players can discuss the lore of the game, the rules and different game strategies with each other. They can take the social skills they develop through gaming and use them in their everyday lives.

Children with special needs can feel isolated from their peer group in regular settings, Griffin said. “Within the game world, children of determination often feel more comfortable and confident to establish [social] connections through their shared enjoyment of the game,” he told Re:Set.

Another innovative gaming device that is used to help children with special needs is the Nintendo Wii. The gadget requires players to act out physical movements to achieve a goal in the game which can help develop various motor skills. For example, Wii Tennis requires players to mimic the motions of playing an actual game of tennis.  A study published by the Archives of Physical Medicine and Rehabilitation found that playing “active games,” such as Wii Bowling, Tennis, and Boxing, were beneficial for kids with cerebral palsy. Games that get children moving have the potential to strengthen their muscle memory, as well as help them assign words to actions.

Game developers are also adapting to become more inclusive. For example, last year, Microsoft released a customizable Xbox controller for gamers with special needs. It has user-friendly packaging, levers, hoops and multiple access points that makes it easy for anyone to open it. The controller has two large programmable buttons and various inputs that allow other devices to be attached. Phil Spencer, Head of Xbox, wrote in a post that the company aimed to “make the Xbox Adaptive Controller a viable solution for the widest possible range of gamers with limited mobility.”

12-year-old Ellie has Spinal Muscular Atrophy (SMA), a genetic disease that affects the part of the nervous system that controls voluntary muscle movement. Ellie, who lives in the United Kingdom, uses an electric wheelchair for mobility, and is an avid gamer. Her parents often have to position her arms and hands on the controls of the game console because she is unable to move them herself. Ellie began playing Minecraft a few years ago with the assistance of an app called Air Keyboard, which allowed her family to create a bespoke, touchscreen keyboard that she could use to game. Minecraft is an open-ended game where players get to decide what they want to do within the game. There are no specific goals, either, so players can explore the world, build castles, and battle monsters on their own terms.

Since Minecraft came into Ellie’s life, she’s built an online community within the game with other homeschooled children. She’s been playing with the same group of children for years. “Without it, I’m not sure what we’d have done,” her father told Re:Set.

Her father, who requested his name not be used to protect Ellie’s privacy, said he has “no doubt that without gaming my daughter would be extremely depressed. Gaming has been a huge part of her life for more six years.”

Tobii Dynavox produces eye tracking technology to help those without the ability to communicate with others. They combine eye tracking technology with speech generating devices which allows a computer to track where the user is looking and create electronic speech for them. This can be a tedious skill to learn, so Lucas Steuber, the company’s global product manager, said he takes “a much more fun approach” through gaming.

By choosing to instruct users how to use the eye gaze devices through games, it “not only shows users how to interact with an eye gaze tracking device but also provides positive reinforcement through the process,” Steuber told Re:Set. He believes the positives of gaming for children with special needs goes beyond the practical benefit of learning new skills.

“Accessible games offer a gateway to something the WHO classified a fundamental human right which is access to so-called activities of daily living,” Steuber said. “The value in learning through games has been repeatedly validated through research. But I would argue there is equal value in providing everyone of every cognitive and motor profile the ability to just take a minute to have fun.”

“You can even use gaming as a springboard to build motivation in other activities.”

Despite the many positives that come with gaming, it’s always still a good idea to monitor your child’s time online. The American Academy of Pediatrics (AAP) released official recommendations on how much time kids should spend in front of a screen. Children between the ages of two and five should only get up to one hour a day of screen time. For children ages six and older, the AAP urges parents to place consistent limits on their children’s screen time, encouraging them to make sure gaming doesn’t interrupt important things, such as sleep and exercise.  Guy makes sure her children have a fixed schedule for screen time each day. She also closely monitors the games her children play to ensure that violent titles are avoided.

“I believe it is really important that we know what our children are playing. Not all games are suitable for our children and online communities can easily reach out in ways that are undesirable,” she told Re:Set.

Parents should also ensure that their children focus on varied hobbies and activities. “You can even use gaming as a springboard to build motivation in other activities, allow them to read books around their favourite video game characters, draw or design new heroes and villains or write their own stories that take place within the gaming world,” Griffin said.

Gaming has the potential to help children with special needs develop a wide variety of important skills and gives them the opportunity to grow, thrive, and challenge themselves from the safe space of their own homes. It opens a door of possibilities for children with special needs and can let them make new and lasting friendships, slay dragons, fight zombies, build castles, and play freely without limitations.

Special Olympics’ Tim Shriver on Why It’s Time to Throw the R-Word out of Your Vocab
‘There Are Many Like Me:’ Parents of Kids With Special Needs Open up About Their Experiences

How Gaming Can Help Children With Special Needs