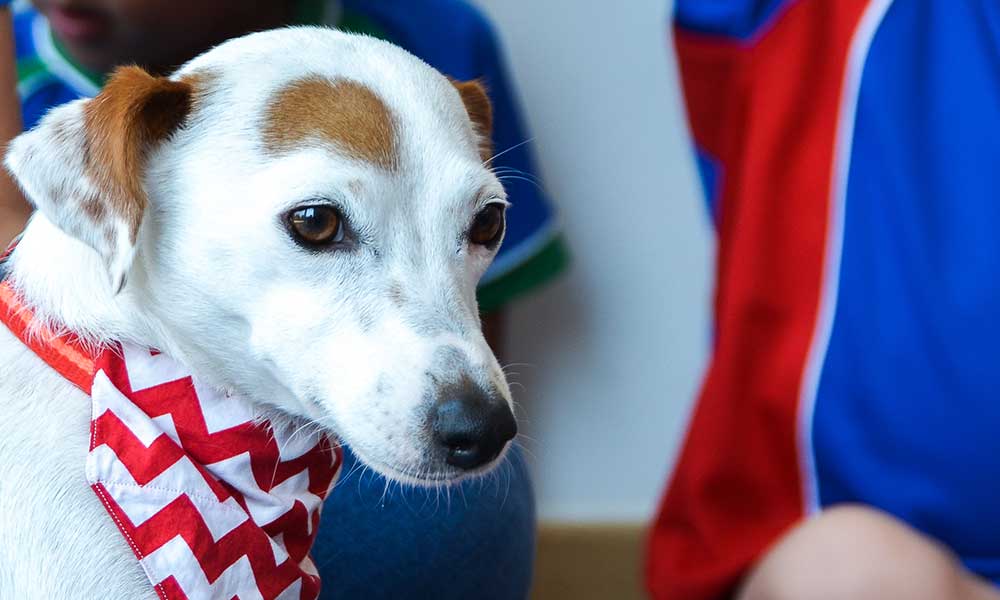 Reading Dogs encourages kids to read out loud to dogs to help them beat stress and feel at ease. Photo courtesy: Reading Dogs

Chubby, a quiet, endearing and floppy-eared cocker spaniel, went from one kid to another and looked at ease as her admirers fawned over her. It was after school hours at GEMS Jumeirah Primary School (JPS), Dubai, and a small group of students were engrossed in a reading session with Chubby. Stories were free-flowing and the vibes were relaxed. “Chubby loves it,” her owner, Zahra Poonawala said. “She loves being here and being around the kids.”

Poonawala and Chubby are a part of Reading Dogs UAE, a project helmed by The Animal Agency, an organization that manages animal models and actors in the region. Started in 2017, Reading Dogs includes reading sessions with furry four-legged friends and kids across different grade levels in the UAE. As of now, they’ve roped in 22 schools in Dubai and six in Abu Dhabi. They’ve organized nearly 500 sessions in over 50 schools, educational centers, and even universities. “It was always our intention to launch an educational project which would promote the benefits of interacting with animals,” Karalynn Thomson, founder, Reading Dogs, told Re:Set. “In the UAE, children often don’t have the same opportunity to interact with dogs and animals as they do in other countries…we felt a structured, safe and educational project such as Reading Dogs would give them the perfect opportunity.”

The initiative is a far cry away from the norm and doesn’t shine the spotlight on a particular child who may be feeling anxious about reading out loud. Cute, fluffy dogs lend a patient ear to students as they read out loud from children’s books like “Oi Dog!” by Kes and Claire Gray. Kids sit close to each other in a circle, pass the book around and take turns to read while interacting with one another and answering questions as the dogs move between them.

At Reading Dogs, kids are encouraged to bond with volunteer dogs and interact with them. (c) Reset Fest Inc, Canada.

“It’s pretty casual,” Natasha Maw, a volunteer at Reading Dogs told Re:Set. “[We] want to create an environment where [reading out loud] is supposed to feel comfortable…I remember being at that age. The more [relaxed] it is, the more [kids] are going to open up.”

Chubby joined Reading Dogs earlier this year. Thanks to her background and training as a therapy dog in India, she was able to grow into her new role as a volunteer puppy at Reading Dogs quickly and went through several assessment rounds with ease. Every dog who works at the organization is required to pass tests and go through shadow sessions to ensure that they’re suitable for the role. While they don’t require to be trained as therapy pets, they do need to be comfortable around kids. “Every dog and owner goes through a rigorous onboarding process before they become a member of the Reading Dogs team and can lead their own sessions,” Thomson explained. The team’s trainer looks for calm and relaxed personalities and also ensures there are no sudden reactions to movements or noises such as barking loudly or shying away from touch. This step is followed by shadow sessions that require the dog’s owner to understand how the program is run before participating in supervised classes with senior members from Reading Dogs.

The team has ground rules in place. For instance, each reading session requires the dog’s handler to be present to ensure safety. “My approach with Chubby is to generally allow her to do what she likes,” Poonawala explained. “So, when she is tired, I give her permission to take a break.” Each class is also restricted to a maximum of 12 kids to avoid overwhelming the dog. For safety reasons, they also ensure that a teacher or a teaching assistant is present at every session, which usually lasts for half an hour. “30 minutes of high energy is a lot for one dog, so this time frame means the dog won’t feel stressed,” Thomson said. “The experience stays positive for the dog as well so that they always come into school looking forward to the sessions.” Thomson ensures parents feel at ease about the concept and encourage them to ask several questions and clarify their doubts with the team beforehand. They’re flexible in their approach and work with students across all age groups.

For staff members at GEMS JPS, initiating the sessions was a mindful choice to make reading a much more inclusive and rewarding activity. “Our expectation was just the hope that the children would enjoy [the session], and that it would be a nice activity for them to do in the afternoons,” Scarlett Christley, an English teacher at the school, told Re:Set. “It actually exceeded our expectations because we found that children who participated in the program had made great progress in their reading.”

The team at GEMS JPS focus on keeping the sessions at the school as child-led as possible instead of asking a teacher to be at the forefront. “The priority is to recreate a lovely reading opportunity for the children and that’s how it has organically become a more relaxed session where children just pick up the books and sit and talk to the dog,” Christley added, explaining that they’ve had sessions with kids of all abilities, including those with additional learning needs such as dyslexia. The impact has been largely positive. Christley spoke about a student who struggled with communication and felt apprehensive about interacting with his peers. After two sessions with Chubby, he started opening up more, indulging in conversations with those around him with greater ease.

Also read: How a Puppy Helped Me Grieve and Find Joy in Life

While Poonawala and her puppy have had only had two sessions at the school so far, Chubby is already a hit among the kids. Nearly every child scrambled to read to her or feed her and play with her. “The reason why this works is basically backed by science,” Poonawala, a psychologist and animal-assisted therapist, explained. She added that to stand in front of the classroom and read out loud can be stressful and scary for many children. “When you kind of compare it with what happens at Reading Dogs, the presence of the dogs has the element of motivation …[and] the stress hormones are reduced.”

Many kids have shown immense progress after the sessions and have also become more comfortable around animals. Photo courtesy: Reading Dogs

Petting a dog and cuddling with them can significantly lower stress levels as indicated by several research studies. In the context of Reading Dogs, the animal-assisted sessions also help many kids feel less intimidated in class. “[In] such a short time frame [things have improved for the kids]. One of the boys here would not read [earlier]…and he wouldn’t even interact with Chubby while he was reading,” Poonawala said. But by the second session, he felt comfortable enough to let his guard down and interact with Chubby, cuddling her and giving her a warm hug. It’s a stress-free, safe space with no judgment. “It’s really cool because it’s also very relaxing for the dog as well as for the kids,” Poonawala added.

“It’s hilarious because people [often] remember us as the dog lady.”

The sessions are run entirely by volunteers and dog handlers who often juggle full-time jobs and work around their schedules to visit the schools. They are also slated to offer animal-assisted therapy sessions with trained dogs in January next year for kids with special needs and disabilities. Poonawala will be leading the sessions with Chubby. They’re currently looking for school partners for the pilot scheme in December.

Reading Dogs has been very popular among the kids so far. The results have been humbling for the team. “It’s hilarious because people [often] remember us as the dog lady and they don’t remember our name, but they remember the dog,” Poonwala said, laughing. “Like whenever Chubby goes to school…I can just hear a wave of ‘Chubby, Chubby, Chubby, Chubby.’”

‘Why Are the Trees Falling?’ How One Dubai School is Prioritizing Climate Literacy
The Kids Are Not OK: Indian Institutions Aren’t Doing Enough to Prevent Suicide

Storytelling With a Furry Twist: How This Group Is Redefining Reading for Kids