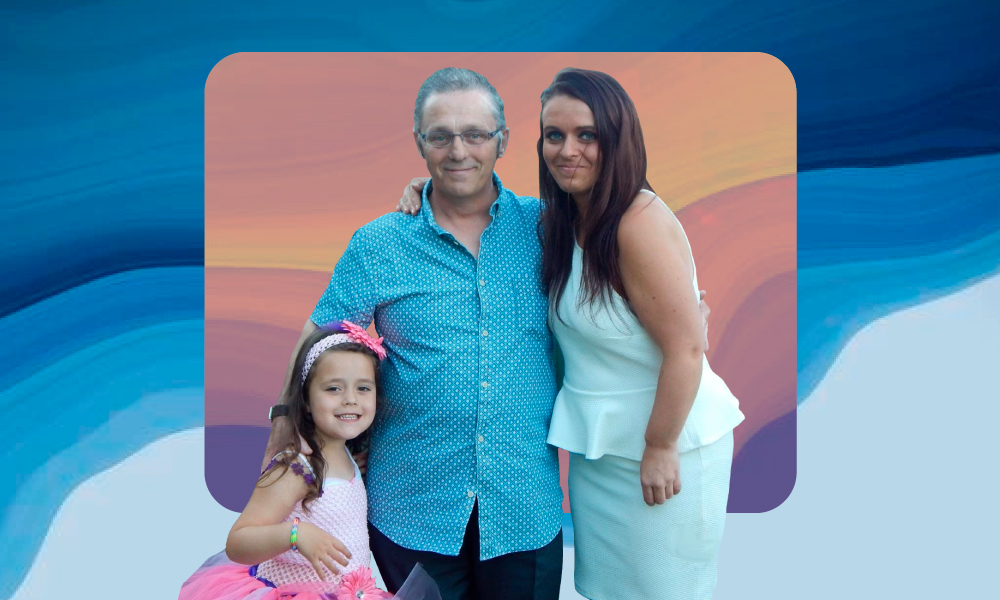 Editor’s note: This is part one of our series on living with early onset dementia and the challenges patients and families face. Through the perspective of loved ones, this piece looks at the patient’s life and aims to dispel the stigma associated with the disease.

In 2016, Rachel Potter, a former nursery nurse from Chesterfield, U.K., found herself struggling to navigate her way back home from her father’s place. She couldn’t decode the GPS navigation system and was lost for hours. Her father eventually managed to connect with her and picked her up. She was distressed and confused.

“When Rachel was diagnosed, there was no certainty,” her father, Kevin Potter, who’s in his early 60s, told Re:Set. “Her condition is progressive.” Rachel received a full diagnosis in 2017. The 34-year-old has Gerstmann-Sträussler-Scheinker syndrome (GSS), a rare brain disease that impacts the nervous system. Patients may experience several symptoms including decreased mobility, visual problems, speech issues, and often, dementia that varies in its severity. Her mother, June, had the same illness and passed away in December last year. “Rachel’s reaction to her diagnosis was quite predictable as she watched her mum’s decline for the last seven years,” Kevin said. The single mom was worried about her 8-year-old daughter, Brooke, who resembles her mother with her dark brown hair and similar facial features. “We told Rachel that the average life span is five years but she may get [to live] longer due to her age,” her father reflected. “I think Rachel has accepted the fact that she won’t be around for much longer but sometimes she acts like she’s going to be there until she’s of old age.”

“When Rachel was diagnosed, there was no certainty.”

Her symptoms have become more severe over the last year. Rachel can’t walk properly anymore and has involuntary movements such as fidgeting with her hands. It’s also difficult for her to read, solve basic math problems and pronounce long words. Additionally, Rachel has gained 25 kilos, according to her father, who said that developing a sweet tooth is a part of her condition. “Her emotional state is very fragile. She will often burst into tears for no apparent reason.” 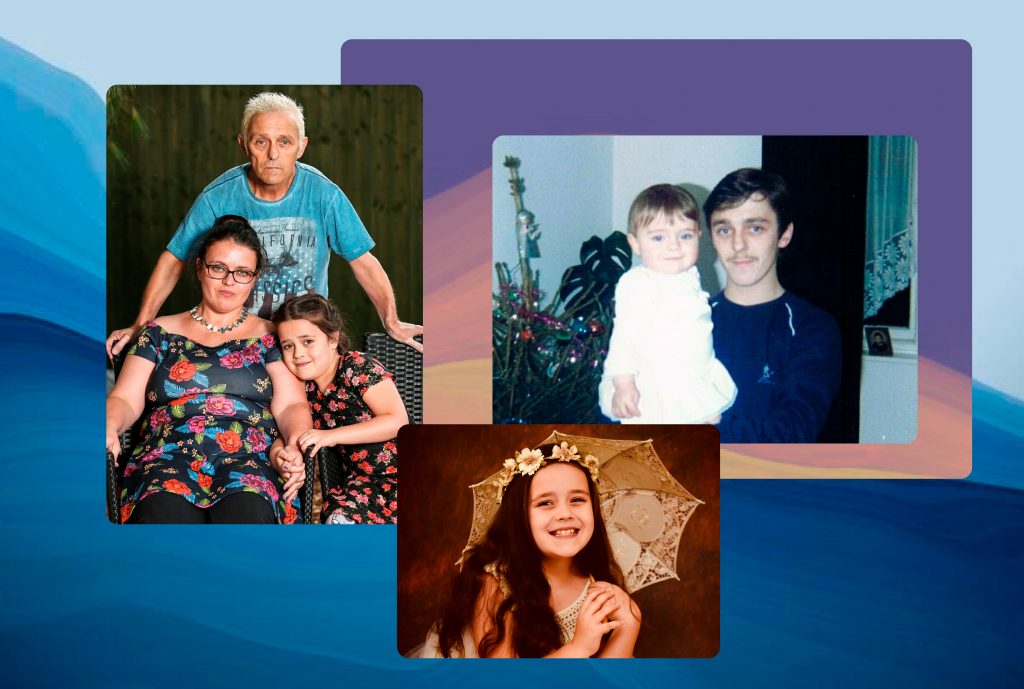 “We had to fight for everything Rachael needs.”

She’s also starting to forget things, little by little. “Rachel’s short-term memory is almost nonexistent now,” Kevin explained. “She will often answer specific questions with a reply that does not make much sense and is not related to the question asked.”

According to the Merck Manual, a majority of the cases with Gerstmann-Sträussler-Scheinker have been observed in families and is predominantly genetic. Very few known cases of patients with GSS exist globally. Rachel is one of the youngest patients exhibiting symptoms of dementia in the U.K. as per a “Metro” report. There is no cure and doctors focus on improving a patient’s quality of life. “GSS is an extremely rare scenario,” Dr. Jayanti Mani, an experienced neurologist at Mumbai’s Kokilaben Dhirubhai Ambani Hospital, told Re:Set. She hasn’t come across patients with GSS in India, Mani added.

“It can run in families. It’s a familiar thing when it happens,” she said, referring to the likelihood that by the time a patient’s diagnosis is confirmed, family members have already seen another loved one battle GSS. Rachel’s family went through a similar experience due to her mom’s earlier diagnosis.

Brooke may have inherited the same gene but it can’t be confirmed until she’s 18. “There’s a 50 percent chance that it has passed on,” Kevin said.

For 60-year-old Raymond Kirton, things started going awry at work eight years ago. He received complaints about his work performance, which left his family baffled. “He was a hardworking man, at the top of his career,” his daughter, Mariel, 23, told Re:Set. The former medical sales representative, who lives in the U.K., was initially told he had depression. This didn’t make sense to the family and Mariel recalled how bewildered her father was after the diagnosis. “I don’t feel depressed, I’m happy!” he said. Months later, they were able to zero down on the problem: early onset Alzheimer’s. Mariel was 18. “I didn’t completely understand,” she explained. She was unsure about what would come next and had many questions: how long did they have before they would start noticing his symptoms? Will his life expectancy be affected? What was going to happen?

According to The World Alzheimer Report in 2018, approximately 50 million people were believed to have dementia globally. This figure is expected to rise to 152 million by 2050. As per the report, two-thirds of the total number of patients had Alzheimer’s. The disease itself is a type of dementia and is associated with a loss of brain cells, which impact memory, cognitive functions and the ability to perform simple and complex tasks. Other types of dementia include mixed dementia, Lewy body dementia, vascular dementia, and frontotemporal degeneration. There is no known cure.

For Raymond, his diagnosis wasn’t unfamiliar as he had seen his grandparents battle Alzheimer’s. “He knew what was coming,” Mariel said. Instead of being bogged down by the situation, her father decided to stay optimistic. “I believe he did it for us, for the family,” Mariel said. “We’ve been lucky that his personality hasn’t been affected. He’s still the same joyful person.” One of Raymond’s most prominent symptoms is being confused between what’s real and what’s not. For instance, sometimes, he thinks the people he sees on TV are present in front of him. Whenever the British reality TV show, “X-factor” is on, Raymond dresses up because he believes he’s the presenter. His family constantly supports him, being patient with him and ensuring he feels safe and validated. “We’ve stuck together as a family,” Mariel said. 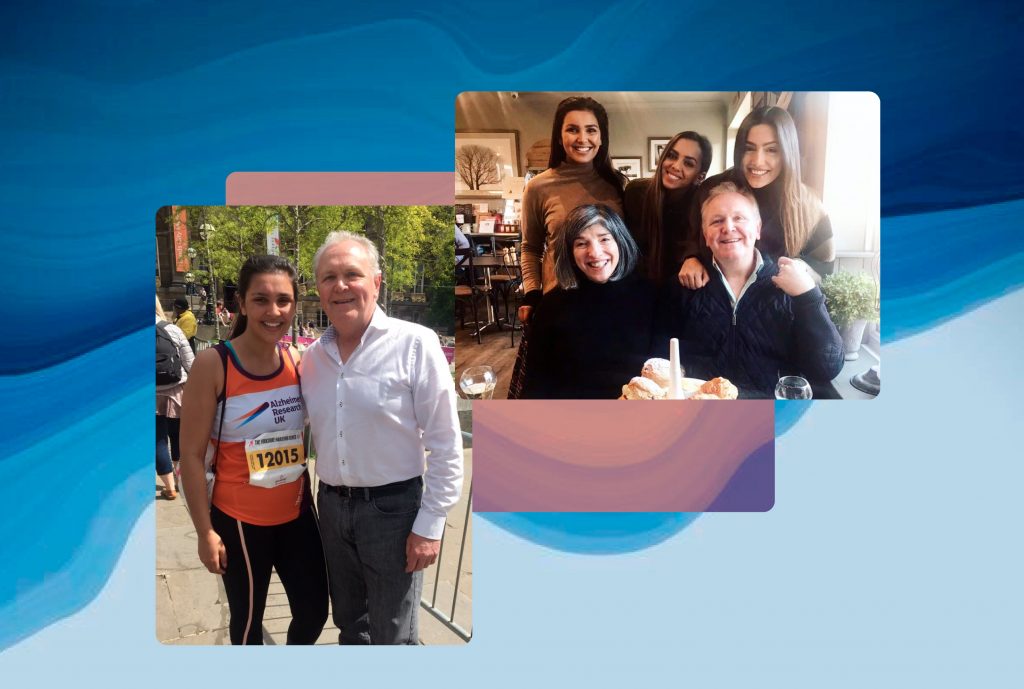 Mariel was 18 when her father was diagnosed with GSS

According to Mani, it’s crucial to keep a patient with Alzheimer’s engaged and active, both physically and mentally. “Care for the patients is beyond medicine. Medication does little,” she told Re:Set. “They [patients] can experience extreme social isolation.” This can make the experience of living with dementia much harder. “Unlike say a heart problem where everybody experiences breathlessness, the way it [Alzheimer’s] affects their behavior is very unique to each patient and their life circumstances.”

Raymond, as per Mariel, doesn’t recognize his own reflection these days and thinks a funny man is following him. While this is completely OK with his family, they find this tricky when they’re outside their home because people tend to stare and judge him. “We don’t want him to be put in that position,” Mariel said. However, she combats the stigma by regularly posting positive updates from Raymond’s life on Instagram. “Dad still has the same sense of humor and finds anyone with a jolly, laughing, smiley face hilarious,” a post on her page reads.

“Care for the patients is beyond medicine. Medication does little.”

The Instagram account was unplanned but has overwhelmed Mariel who has received messages from other families combating the same illness. She’s also been vocal about supporting the cause and raised funds for Alzheimer’s Research U.K. in 2017. Mariel’s mother, Kiron, currently handles her husband’s full-time care but is considering hiring a caregiver to assist her with basic activities such as helping Raymond bathe. “My mum wants him to be at home as long as possible,” Mariel said. The family plans regular get-togethers and ensures that Raymond gets to interact with his loved ones often.

Meanwhile, Kevin has arranged for a specially adapted home that includes wheelchair accessibility and an elevator to the bedroom among other facilities for Rachel and Brooke. The mom has recorded her memories for her daughter with the assistance of Ashgate Hospicecare, a charity that caters to patients with serious illnesses in the U.K.. A special care team also attends to Rachel and Brooke’s daily needs from 7:30 a.m. until 9 p.m. “Rachel has full support with her daily tasks but the carers let her do what she can which helps preserve her independence,” Kevin explained.

The retired border force official has been raising funds for his family and planned trips to Disneyland, Florida and the Harry Potter Studios in London, to give them a chance to bond away from their regular routine.

These have been rough times — Kevin fought for his daughter’s care package and for Brooke to stay with her mother after social services tried to take Brooke away. “We were told when we went for the diagnosis that we would have to fight to get everything Rachel needed,” Kevin said. “They were right.”

Due to acute stress, Kevin has lost over thirty kilos. He reckons he’ll need to eventually seek counseling. Based on advice from doctors, Brooke has been clearly informed about her mother’s diagnosis. “We said that lots of doctors have looked at her mum but there was no treatment available,” Kevin said. “We reiterated that Brooke would be looked after by a family member and that it was OK for her to be sad, and OK for her to be happy, especially in school.” Kevin believes that his granddaughter has been strong throughout and looks after Rachel really well. “Brooke has become a carer for her mum without even realizing it.”