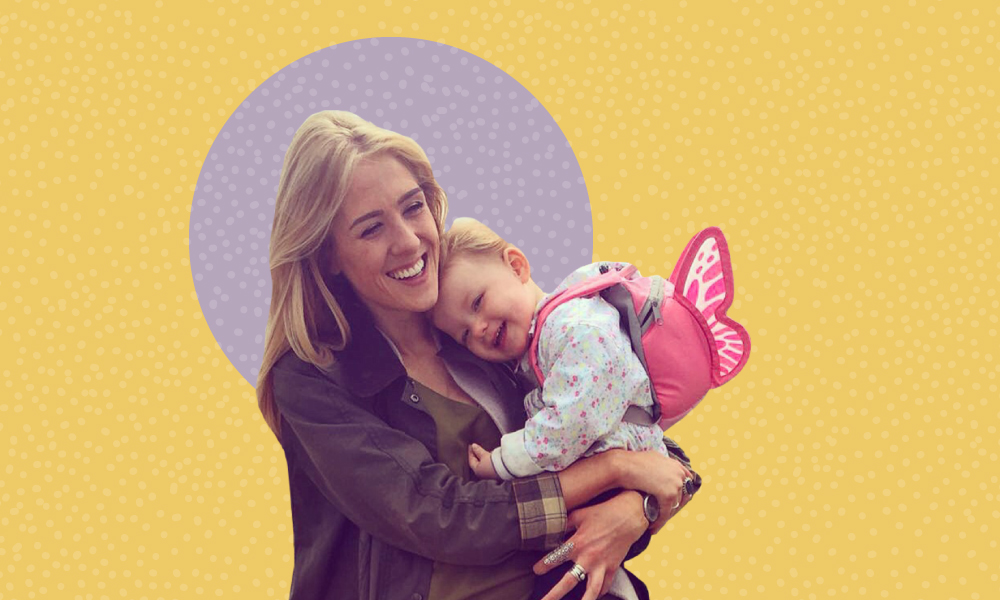 Elle’s daughter is too young to understand the full implications of a genetically inheritable condition, but as soon as she’s old enough Elle plans to talk to her about it. Photo courtesy: Elle

When Carmen*, 31, first heard about Selma Blair’s Instagram post, she was hit by an odd mixture of feelings: elated, then guilty, then frustrated, and finally angry.

Last October, Carmen’s sister sent her a link to the actor’s picture, the caption of which described her diagnosis of multiple sclerosis (MS). Carmen has been living with it for 12 years. She struggles to explain her autoimmune condition to the people around her, and thought that the diagnosis of a high-profile person might make it easier to distill information about MS.

“As soon as I thought about it I felt terrible — I wouldn’t wish the disease on anyone and it’s awful to be happy when you find out someone has it,” she told Re:Set.

The frustration and anger came from the position she’s in, where she has to look to a celebrity on the other side of the Atlantic in order to find solace for her disease. It shouldn’t be this hard, right?

“After I saw it, I realized she had a son. I have two children of a similar age and they’re what keeps me going every day,” Carmen said. Although her life is hugely different to that of a movie star — she worries about how she’ll pay the rent if she gets fired for calling in sick too often — there is still a sense of relief that someone else is speaking up about what life with MS entails.

“If it weren’t for my children, I think I would give up.”

Multiple sclerosis is a chronic, often degenerative condition which affects the brain and spinal cord. There is no clear cause or cure. Symptoms can vary and range from sensory to neurological and can include loss of muscle control, acute pain, and mobility issues.

Carmen lives in the south of Spain, and works in IT support. A single mother, she was diagnosed in her early 20s, when her children were one and three years old. At the time, Carmen’s symptoms were relatively mild — fatigue, aches, and foggy vision out of her left eye — but over the years, they have become increasingly severe. Now she struggles with simple tasks, unable to walk unaided and losing track of her own thought processes.

“If it weren’t for my children, I think I would give up. In so many ways, they’re the best thing that could have happened to me but if I’m honest, I wouldn’t have them if I could go back in time,” she said.

She struggles to be a good mother while also dealing with her health issues, and fears for her children’s future if her illness progresses, Carmen explained on the verge of tears.

“MS is degenerative. It will get worse. I hope that by the time I’m at breaking point, there is better support for people struggling with the disease.”

Despite people’s reassurances that she’s a great mother, she believes she’s not offering her best self to her kids, she said. “My daughter struggles with mental health issues and in the good moments, I’m able to support her, but sometimes it can be hard to stay patient when I’m constantly in pain and fighting to get out of bed every morning,” Carmen told Re:Set. “I find myself wishing I could just have a few days to myself.”

For parents living with chronic illnesses, this cycle of frustration followed by guilt seems common. 44-year-old Logan Crumrine is a father of two teenage boys, based in Washington State, U.S. He was diagnosed in his teens with Crohn’s disease, a condition linked to inflammation of the digestive system which can lead to debilitating pain and severe digestive issues. 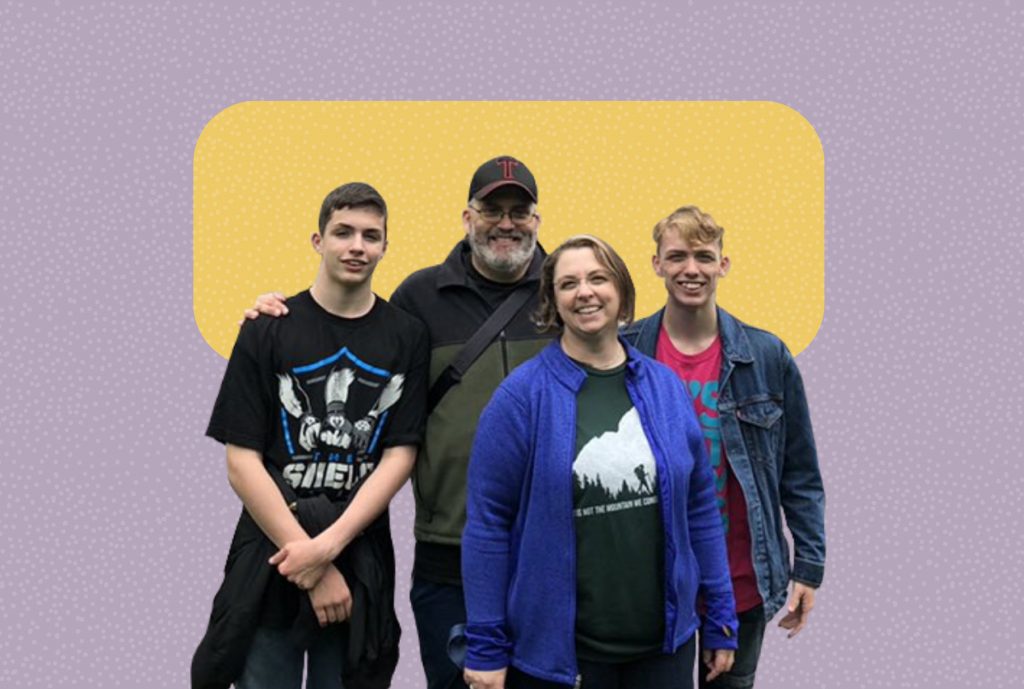 By the time he got married and decided to have children, he was in remission. In the late 1990s, when he was in his 20s, Crumrine underwent a surgical procedure to remove a portion of his intestine. He figured he was “cured” and went about his life normally, but more than a decade later, he had his worst flare-up yet.

Crumrine was in constant pain. Medicines didn’t help and he was housebound, unable to work. He had to claim disability benefits, lost 100 pounds and was depressed. His family moved from Oregon to north of Seattle to be closer to extended family. “We weren’t sure at that point that I was going to live,” he told Re:Set.

Crumrine’s parenting took a toll during this period. “I was taking out a lot of my anger by micromanaging the kids and being too controlling,” he admitted. “Luckily my wife was never afraid to step in and tell me I needed to back off and reassess what was going on.”

For many children growing up with chronically ill parents, the day-to-day can be tough, but it can also teach them how to cope with challenges and adversity early on.

Dhriti**, 25, grew up in Kolkata, India with a chronically ill father. He suffered from irritable bowel syndrome, which can have symptoms similar to Crohn’s. “When he stopped working, [Dhriti was 12] it was really hard on everyone. We were struggling financially, I had to give up aspects of my life and even move schools because of his illness,” she told Re:Set.

“We weren’t sure at that point that I was going to live.”

Everyone at home, including her mother, focused on making ends meet and there weren’t many conversations around her dad’s health. Her mom worked two jobs to keep things stable.

“At the time it was really hard and I felt angry — not at my dad — but at the world. It felt like I was the unluckiest kid in the world, but I realize how self-absorbed that was,” Dhriti said. “Now I’m just glad I have two parents who love me. I know that dealing with something so hard has made me a better person in the long run.”

Dhriti’s sentiments about the impact of a parent’s diagnosis resonate with Crumrine. He sees this in his sons, who are now 14 and 16. Their resilience given the circumstances at home amazes him and he has come to appreciate his new role as a stay-at-home dad. He thinks this is a rare opportunity to offer his boys a valuable lesson, particularly in a community which heavily emphasizes traditional gender roles.

“I’ve had to find a new identity as a man because I can’t be strong, I can’t be the provider, but I can…create a calm and peaceful home for my wife,” he said. As a result, he believes his sons are attuned to the nuances of societal pressures on men and women, and Crumrine hopes they will be more able and ready to fight inequality and make their own path in life.

It can often be hard for people to understand chronic illnesses, some of which can be invisible with symptoms like constant fatigue or numbness. Parents with chronic illnesses are often left with guilt and a sense of helplessness. Ill health coupled with family responsibilities and kids can exacerbate their struggles.

There are a variety of support groups for people whose family members have these conditions, but very few actually look at struggles of parenting while having a chronic condition.

“My rheumatology team seemed annoyed that I’d got pregnant.”

Elle***, 27, found this to be true when she became unexpectedly pregnant five years ago. She was diagnosed at age 16 with rheumatoid arthritis, which causes pain and swelling of the joints. Elle, who lives in Nottingham, U.K., copes with severe fatigue, pain and constant discomfort even while on medication. While her doctors were helpful, nobody explained how the condition would affect her as a parent.

“My rheumatology team seemed annoyed that I’d got pregnant. They helped adjust my medication, but that was about it,” she told Re:Set. “Still to this day, I’ve never been asked how I’ve been coping as a mother.”

While she consulted midwives, rheumatologists and her obstetrics team, she couldn’t find anyone who could help her bridge the gap between her condition and pregnancy. She attended prenatal classes which did little as they didn’t address complications specific to her condition.

Aside from the day-to-day struggles, since having her daughter, Elle has become seriously ill, both due to the autoimmune condition and the harsh side effects of some of her medication. Before her daughter turned one, Elle spent a week quarantined in the hospital. And there still seems to be no support available in her community for people in her situation.

Many parents with a chronic illnesses also have to explain to their kids that things may get worse in the future. In Carmen and Elle’s cases, they also have to prepare for the possibility that their kids may have inherited it.

They both tell us they have yet to decide how and when they tell their children. Elle’s daughter is too young to understand the full implications of a genetically inheritable condition, but as soon as she’s old enough, Elle plans to talk to her about it so that she can be more vigilant of potential symptoms. “She needs to be aware if anything is wrong so that we can get it checked out as soon as possible — the sooner we catch it the easier it’ll be for her to live with, if she has the condition.”

According to U.S. non-profit organization Caring Voice, which aims to improve the lives of people with chronic illnesses, one of the most important things for parents to remember is that the condition — and all the lifestyle adjustments it can bring — is no one’s fault. “Don’t be too hard on yourself. You can’t take good care of a child if you don’t take care of yourself. Do the best you can to maintain a good attitude and let your kids know you love them,” they advise.

Many parents we spoke to seem to be fighting guilt. And yet, when asked, they recognized their struggles have perhaps added a value to their children’s lives.

Dhriti, despite being brutally honest about how hard it was for her family during her childhood years, said she now respects her father more than anyone else in the world.  “I couldn’t see it as a kid, but now I see how strong he is,” she told Re:Set. “He still hung out with me and laughed and enjoyed life, even though he’s in so much pain all the time. I hope to be a little bit like him one day.”

Editor’s Note: *Carmen asked for her name to be changed to protect the identity of her children; **Dhriti asked her surname not be used; ***Elle asked that we only use her first name to protect the privacy of her family.

The Rollercoaster Journey of Parenting While Living With a Chronic Illness