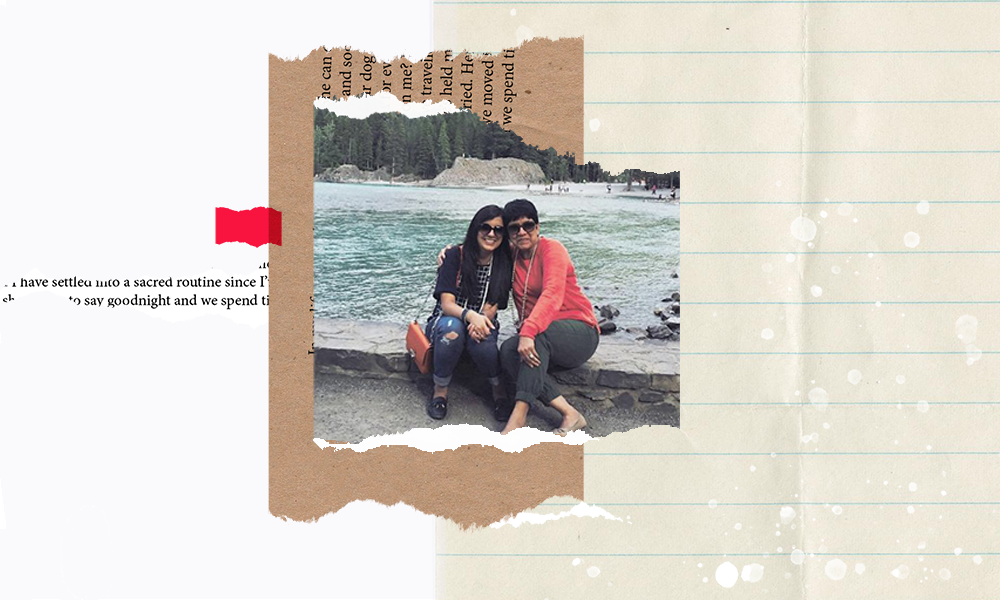 "I think self-care for me is taking a step back and taking care of my own needs." lllustration by(c) Reset Fest Inc, Canada.

In my life, my mother, Kiran, is paramount. She can do it all — head a company, juggle various family and social commitments and she’s the only one who can put our dog to sleep after his tantrums. My mother is my sounding board for even the simplest of things: “Do these jeans look good on me? How should I negotiate this contract, mom?” We’ve travelled the world together, spent late nights talking, she’s held me as I’ve cried and we’ve laughed together until we cried. Her and I have settled into a sacred routine since I’ve moved back home — she comes to say goodnight and we spend time chatting about our day.

We often forget that our parents, especially our mothers, had (and have) a life that’s separate from their role as parents. My mother has been a professor, academic director at renowned universities, and is now a kickass entrepreneur. She’s done her MBA and PhD after having kids and can hold her own on any topic under the sun. She’s instilled in me the importance of financial independence as a woman and has encouraged me to follow my own path and make mistakes.

Growing up, I’ve heard family members reiterate her strength and resilience through two significant incidents. In 1984-5 during the rise of right-wing extremism in Punjab, my parents were sent letters that threatened to harm the family. My mother asked my grandmother to take my brother, then a baby, to my uncle’s house in another city until the situation calmed down. My parents stayed back.

In 1990, there were protests across India against job quotas and my mother, then pregnant with me, was on her way to work when her car was stopped. The man forced her driver to take the car to the nearest police station and threatened them to stay put as he went inside. As soon as the man stepped out of the car, my mother asked the driver to quickly reverse and speed away, catching her captor unaware.

Maya Angelou has summed up mothers better than, I, a mere mortal still struggling to figure out this adulting thing, ever can: “My mother’s gifts of courage to me were both large and small. The latter are woven so subtly into the fabric of my psyche that I can hardly distinguish where she stops and I begin.” If I can imbibe even half her grit and resilience, I’d be good in life.

I’ve always been curious about my mom’s thoughts on parenting, mental health and self-care. On Mother’s Day, I finally asked her the questions I’ve always wanted to. Snippets of our conversation below.

Your relationship with your mother was quite different to the one you and I share — why do you think that is and how has parenting evolved according to you?

While I was growing up, the thinking was “these are your parents, you have to take their word for it.” Questioning them too much was considered a sign of disrespect and that you’re underestimating them. I’d definitely question, but I’d make sure I never crossed that fine line of disrespect. My dad always encouraged us to ask questions, more so than my mother. I’ve worked with children of all ages throughout my career and kids need an outlet to confide in someone without the fear of judgement. When I became a parent, that thought heavily influenced me and I wanted you to know you can come talk to me about anything at all. Your generation also has all the possible information in the world at their fingertips, so I think it’s even more crucial that parents are open to discussion with their children to make sure kids aren’t being misguided.

Did you know about mental health growing up? Why do you think there’s still so much stigma around it especially in the Indian community?

The term “mental health” wasn’t used while I was growing up and there was little understanding about it. Seeing a therapist wasn’t taken in the right spirit — people immediately had negative connotations and would call the person “mentally unstable” or something along those lines. I think the stigma still exists in our society because there’s a lack of awareness and misinformation has been perpetuated over the years. There has to be more grassroots awareness about mental health and therapy. You have to start a conversation, answer people’s questions and I’d definitely encourage parents to read up about it.

What’s the one piece of advice you want to give me?

I know that if you set your eyes on a goal, nothing can stop you from achieving it. You will go against the odds if you truly believe in something. I want you to remember that during the tough moments to help you bounce back.

Is the concept of self-care new for you or the term?

The term is new, but the idea has definitely been around. I watched my mom set aside time for herself, try different activities and pursue her interests. She was president of the Indian Airforce Wives Association, she went out with her friends, she had her me-time and enjoyed quiet moments with a cup of tea. I observed that she didn’t neglect herself which in turn made her a better mother. This has had a big impact on me.

Why do all my friends think you’re so much cooler than I am?

Is this a real question?! That’s something you will have to ask your friends!

“My parents instilled a strong sense of self and confidence in me.”

You’re the strongest woman I know. You remain unfazed during the most stressful of times or at least you don’t show it. Where do you get your strength from and what does self-care mean to you?

My parents instilled a strong sense of self and confidence in me. They were feminists without being aware of the term. They treated my brothers and I equal and told me I could do whatever I wanted to. My dad encouraged me to play football and he cheered me at matches when I was part of the cricket team in college. Children often imbibe by observing their parents and the way my parents treated me definitely bolstered my confidence. My mother always told me she regretted that she didn’t understand the importance of education when she was a student. It was only later she realized how education can empower and help a person thrive. She made sure I was given the same opportunities as my brother and she even sent me to better schools so I could flourish! I always kept that in mind while you were growing up.

I think self-care for me is taking a step back and taking care of my own needs. Women, especially mothers, often tend to put their needs at the bottom of the priority list. Putting yourself first can give you the time and space to re-energize yourself. It can help you take care of your emotional health which ultimately has an impact in all aspects of one’s life.

I Asked My Mom About Self-Care, Mental Health and Parenting