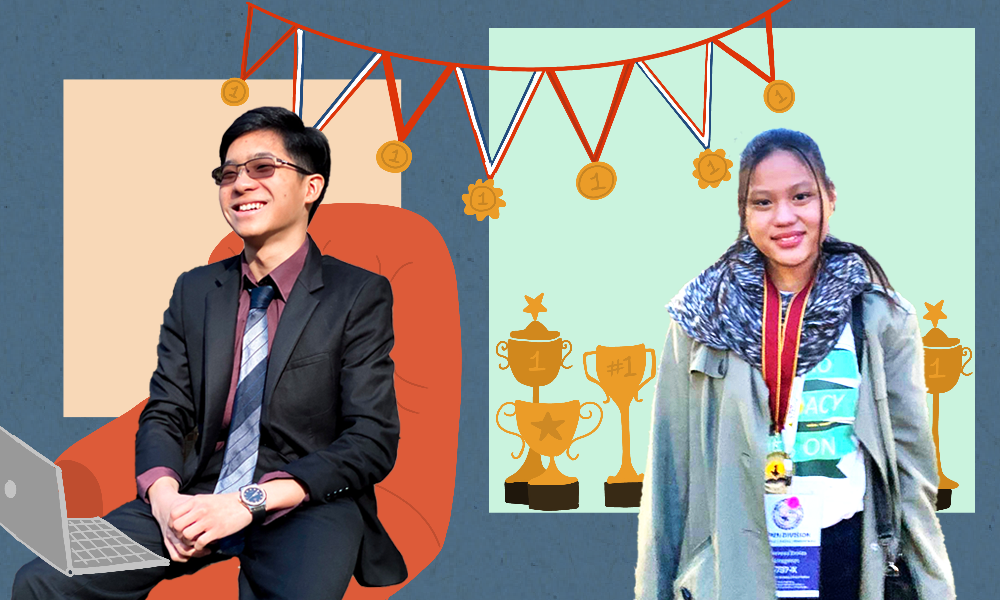 Managing online school and the competition was an exhausting but rewarding job for these teens. Photo courtesy: Theresa Enrica L. Limgenco and Jacob de Jesus

As schools closed down, extracurricular activities and student tournaments got cancelled and months of training in areas such as public speaking and essay writing for many students around the world seemed to be going for a toss. In addition to the regular classroom experience, the COVID-19 pandemic brought after school events, like the Model United Nations and debate clubs, to a halt.

Extracurricular activities have been one of the most integral aspects of many students’ school lives. For some, it may be just another addition to their resumes for successful college applications, while for others a way of finding a community and exploring their interests. Many extracurriculars aim to engage students with topics outside the core curriculum, refine their writing, speaking and research skills and help them connect with people of diverse backgrounds. When achieved, these aims can help develop successful relationships and careers for students.

In light of the pandemic, many students have stepped up to the plate and taken the initiative to move after-school activities online. Students put their own spin on the World Scholar’s Cup (WSC), one of the world’s largest and most popular student competitions, and brought it online under the name ‘Couch Camp.’

WSC, an academic decathlon of sorts, is a competition that sees students compete in debates, essay writing, and team quizzes based on a curriculum of six subjects. These include art and music, history, literature and media, science and technology, social studies, and a special area, like ‘mistakes and recoveries,’ which are updated every year. Being an international competition with different rounds hosted in cities across the world, WSC was cancelled and according to several Couch Camp student organizers, their schools decided to drop training students for the remainder of the year.

Couch Camp was the brainchild of Shaurya Chandravanshi, an 18-year-old student from the UAE, who was helped by 55 of his peers from Australia, Philippines, and Indonesia, among other countries. Chandravanshi and his friends, long time competitors in WSC, tapped into chatting apps that had the potential to host hundreds of students. Organizing Couch Camp was motivated by their love for WSC and a desire to provide an opportunity that many students lost after the program was paused due to COVID-19. Quizzes and debates which would normally be hosted in auditoriums were held on group calls instead. Adjustments such as increasing time for submission of essays from 85 minutes to 48 hours were made for the comfort of the staff and participants.

16-year-old Theresa Enrica L. Limgenco, a student from the Philippines, participated as a debate adjudicator, cluster manager, and logistics member. “Couch Camp was a different experience because I was not competing as I do in WSC,” she told Re:Set. “The best part was seeing people from all over the world getting along during this difficult time and enjoying themselves via chat.”

At least 500 students across the world participated in the event which ran for a week in April.  “WSC is popular because it’s able to connect like-minded people who are just as nerdy…as each other,” Archi Tulsian, an 18-year-old student from New Zealand, said.

“Aside from the lack of sleep and happiness I felt, I was also stressed because I also have a life outside Couch Camp.”

Tulsian was the head of public relations as well as a member of the writing and logistics staff and juggled sending out 500 personalized emails, communicating with competitors, managing the official Instagram account, and the answer room chat for the quizzes. Organizing the competition was a herculean task, supported by students across various timezones who were also attending online school. Another student, 17-year-old Jacob de Jesus from the Philippines told Re:Set, “I didn’t want to let anyone down at Couch Camp, so the hard work that came with it meant I slept late and I had to catch up with homework right after debates. I ended up missing a few worksheets and zoning out of classes.”

Student organizers were busy at all hours fielding calls and questions from participants who were figuring out how to navigate the virtual competition. “Aside from the lack of sleep and happiness I felt, I was also stressed because I also have a life outside Couch Camp,” remarked Limengco.

Couch Camp utilized the syllabus provided by WSC so students could explore topics like geo-engineering or recreations in the arts even in lockdown. “At school, the learning environment is restricted and students are just aware of global issues, without knowing the solutions for them,” De Jesus said. “This competition allows you to build capacity for social interaction through fun and interactive social events. Here, even small successes are celebrated.”

“We offer a safe space and a chance for kids to see that it’s OK to be who you are and to express yourself in whatever way you desire.”

Limengco, Tulsian, and de Jesus concurred that communicating with team members, taking breaks, and planning ahead were valuable lessons that the Couch Camp staff learned this year. The team building and organizational skills that the student organizers departed with can help them and the participants with managing healthy working relationships. With a successful event under their belt, Couch Camp’s staff said they are proud of their fellow peers who made it possible and the community they built.

“A lot of the time, kids like us, who enjoy academia and tend to feel awkward about it, are frowned upon, deemed as ‘uncool,’” Tulsian said. “We offer a safe space and a chance for kids to see that it’s OK to be who you are and to express yourself in whatever way you desire.”

Also read: Why Your Child Could Use a Semester Off University

How Students Are Organizing Extracurricular Activities During COVID-19