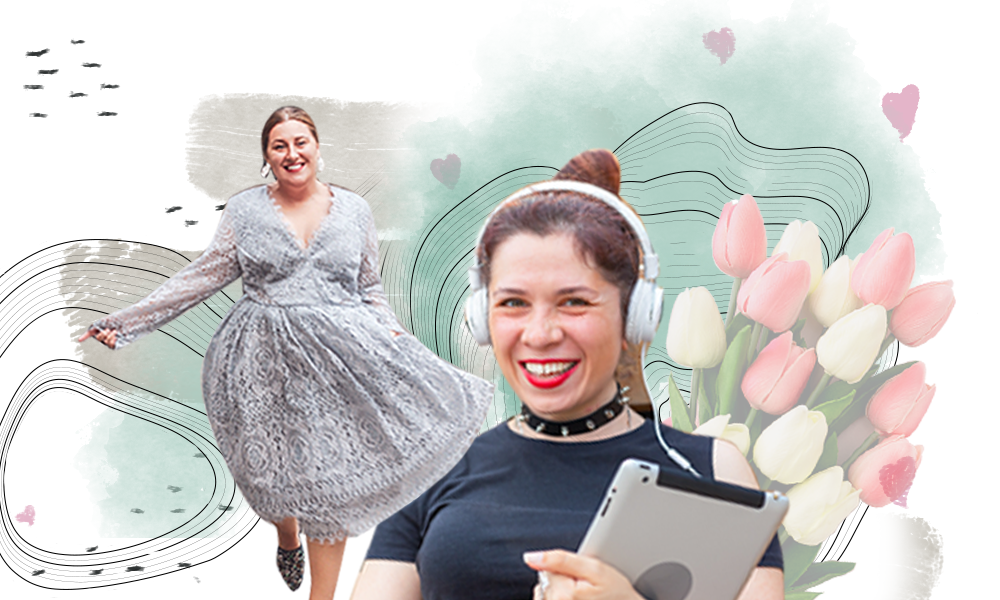 Earlier this year, Yulia Tsvetkova, a Russian body-positivity activist and artist, got into trouble with the Russian police for her illustrations that celebrated the female body  — part of the “Women are Not Dolls” initiative she launched last year. The hashtag campaign #женщина_не_кукла (“A woman is not a doll”) was launched on VK, a Russian social media platform. It hoped to embrace aspects of the female body that are often hidden, stigmatized or seen as imperfections. The campaign was labelled “pornographic” by local police even as semi-nudity among women is visible in Russia as part of advertisements.

While the stereotypes around a “desirable” female body continue to persist in society and popular culture, some Russian women are reclaiming their ideas and understanding of beauty. They’re challenging the status quo and redefining what their body means to them by wholly embracing themselves along with their perceived flaws.

Women who grew up in Russia through the 90s have seen drastic transformation in society. The period saw a changing social landscape with the fall of the Soviet Union, where beauty was associated with maintaining a “healthy” bloodline. However, the present day ideal is heavily influenced by the global image of the ultra skinny.

29-year-old Tatiana Komina, known as tatti.girl on Instagram, is a body-positivity advocate who uses the social media platform to share her views on beauty, which she has now come to understand as  the “harmony of the inside and outside.” Musing on Russia’s history, she said, “In the past with USSR, everyone was supposed to be like each other, and if you were different, that needed to be changed,” she said. Originally from Vladivostok, a port city, Komina moved to China when she was 23, and recently relocated to the Philippines, where she continues to reach out to Russian women through her page — by posting her pictures with thoughtful captions on body image, beauty, harmful stereotypes and more. She also takes the time to interact meaningfully with her followers through comments and direct messages.

“In the past with USSR, everyone was supposed to be like each other.”

As Russia is a large country spread across two continents, with stark cultural differences in urban and rural areas, there are also different sides to body shaming faced by women — on one hand, a relatively universal, skinny ideal becomes apparent, while on the other, the heavier, more voluptuous body is coveted. “In ‘older’ parts of Russia, a ‘good woman’ has to have a body to ‘hold onto’,” Moscow-based Svetlana Poletskaya, a counseling psychologist for adults, told Re:Set. “The other, ‘new’ parts, which mostly include the bigger cities have different views, corresponding to the global ideal [as portrayed by certain media channels.]” Poletskaya runs a small practice in the capital. She focuses heavily on the general perception of eating disorders, which she feels is still somewhat lacking among women in Russia. According to her, for many women, eating disorders come to light only when it becomes necessary to seek medical intervention.

Finding statistics on mental health in Russia is not easy; a report in Meduza, an independent Russian news site that also publishes in English, estimates that at least ten in 100,000 individuals in Russia live with eating disorders. It’s important to note that eating disorders are often linked to body image issues. The obsession with conforming to the ideals of beauty portrayed in popular culture and on social media is evident on VKontakte, a Russian social media platform. Users post about several topics and even glorify eating disorders and share tips on the kind of pills that help you stay “perfect.”

Nina Volontey is a 32-year-old psychotherapist who practices an experimental approach known as Gestalt therapy. Through this approach, she helps patients pay attention to their present circumstances to tackle their issues instead of dwelling on the past. She works closely with couples and individuals from varied backgrounds including survivors of human trafficking. She says that she has female patients with eating disorders from different age groups, from children as young as 12 to women in their 40s. “Anorexia is more common among teenagers, whereas bulimia is commonly prevalent among older women in their late 30s-40s. But I know only a few professionals in Russia, specifically Moscow, who specialize in treating them,” she said.

“The pressure on women to ‘look good’ is due to [a perceived] lack of eligible and prospective husbands,” Volontey tells Re:Set. This idea can be traced back to the imbalance in the sex ratio in the country, with women outnumbering the men. While the gap has reduced, the male to female ratio is still low with 86.8 men per 100 women.

“The pressure on women to ‘look good’ is due to [a perceived] lack of eligible and prospective husbands.”

Breaking from this beauty ideal is a journey in itself; one that Tatiana Koptilova, a 33-year-old Russian photographer, designer and blogger, is familiar with. “Many years ago, I had a serious illness and was in a coma for seven months. Though I spent three years with disabilities, I have recovered,” she told Re:Set. “I gained weight and my fingers were injured, which worried me. I used to think my hands were ugly.”

Over time, Koptilova found her body to be the source of her healing. As she battled her illness, she realized that meeting conventional standards of beauty wasn’t something she wanted to adhere to and acknowledged the importance of developing self-love. “When I was ill, I had time to reflect on things that are important,” Koptilova said. “As I began to gain weight, it also became a process for me to realise what was truly important: and it was definitely not complying to any beauty standards or being obsessed with my appearance.” For Koptilova, her story is that of a strong woman, rather than one who “gained weight and lost some ‘beauty.'”

Komina first felt insecure about her body as an adolescent. “I was the biggest girl in my class at 16-years-old. Unfortunately, I struggled with my mother’s judgement at the time too,” she told Re:Set. “I even recall crying at night because of the words I heard from her.” Komina’s mother tried to influence her choice of clothing in an attempt to “hide fat” as well as constantly body shamed her, leaving her emotionally disturbed. However, it was through confrontation with her mother, traveling and meeting people from around the world, followed by a long process of self-acceptance and mindfulness, that she finally began to love her body. Komina began to experiment with fashion and worked on her personal style. “Even being able to buy clothes for my size used to be a problem: shop attendants would look at me as if to say there’s nothing for me [in their store],” she admitted. “Things are changing now, though.”

The beauty landscape is scattered with riddles and underlying issues. Poletskaya believes that the media plays a significant role in causing body image insecurities among women. However, independent voices in Russia like Komina and Koptilova are redefining what beauty means to them every single day. Komina hopes that her posts on social media will help her followers look beyond the lack of inclusivity and diversity in the fashion world and highlight a message she feels strongly about: body size shouldn’t affect happiness.

While Koptilova sees the idea of body positivity slowly gaining momentum, there’s still a long way to go for diversity and acceptance to become mainstream in Russia. “I would like women to love their bodies and…stop comparing themselves,” she said. “The body helps us live and and our task is to love it.”

An Open Letter on Mental Health From a High School Student
More Than Just Face Masks: Breaking Down the Different Types of Self-Care

Women, Not Dolls: The Rise of Body Positivity in Russia