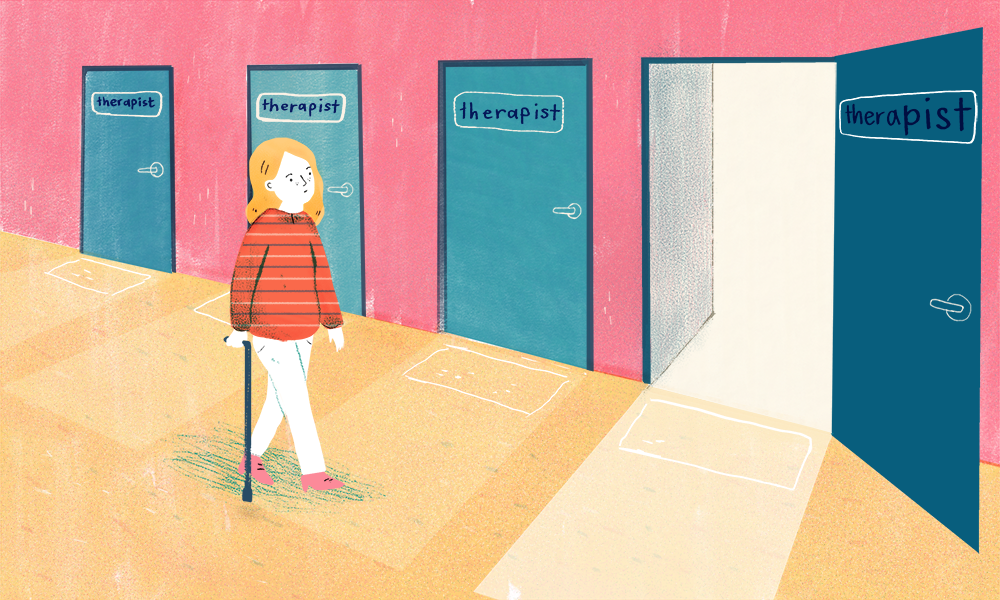 In the summer of 1998, 18-year-old Preethi Srinivasan was out on a college trip to Puducherry, a laid-back town in southern India. A beach getaway was going as planned until Srinivasan felt herself slip and fall. “The moment my face went underwater, I felt a shock sensation travel through my body,” the former competitive swimmer and cricket player told Re:Set. “It was totally anti-climatic. Not a drop of blood and I didn’t lose unconsciousness, but life as I knew it was over.”

Srinivasan, now 39, was left paralyzed from the neck down. The founder of a non-profit organization, Soulfree, Srinivasan has a bright smile, short hair and a passion for sports. Her organization offers mental health resources and support to patients with disabilities and special needs, particularly individuals with spinal cord injuries in India. “We think we are our bodies, the achievements we’ve done through our bodies,” she said. “The yardstick for success [is something] that society decides. When suddenly, everything you thought you were is completely wiped out in a split second, you’re just shattered.”

Post her accident, Srinivasan and her family went through a grueling time in Chennai as they sought treatment. Srinivasan’s head was shaved for a medical procedure and she felt an acute loss of identity. “At 18, it’s really difficult to have the maturity to define who you really are that cannot be destroyed by external circumstances,” Srinivasan said. “I went through a period of extreme isolation.”

Doctors mocked Srinivasan’s shaved head and nicknamed her ‘Rowdy.’ They didn’t offer adequate support or advice until she directly confronted one of them. “I wish [there were mental health resources]. Not just for me but for my parents,” she lamented. “Somebody to come and say, ‘This is what has happened. It’s not going to be easy but you can get through it.’” The family wasn’t informed about the ramifications of her injury. Her mom tried to deal with the situation on her own as her father was in the U.S. It was a trying period: Srinivasan thought she was going to die and her mother often fell asleep while standing in the hospital room, waiting for updates. The situation had an immense impact on Srinivasan’s state of mind as she tried to come to terms with her accident. Mental health was never spoken about and remained unaddressed.

“When suddenly, everything you thought you were is completely wiped out in a split second, you’re just shattered.”

Her family temporarily moved to a center in Chicago where staff members taught them the basics of caregiving. Srinivasan and her parents also attended several group counseling sessions. They were encouraged to talk about what they were going through. “I really believe that the problems with the body are the easiest to take care of. Emotional, psychological, the issues you can’t see are much more difficult to handle,” Srinivasan said. “Especially for a person [who has] to go through a life-altering condition, I feel counseling is vital. They need to know it’s possible to be successful from that point.”

Jocelyn Mondragon, a Mexican-American social media disability activist and model from Louisiana, battled anxiety as a child, receiving clinical support years later in college. “While I was taking a lot of psychology and child development classes, I also had to see a counselor as part of a class requirement,” she told Re:Set. Her sessions with the counselor made her acknowledge her own mental health battles and she decided to continue with therapy even after the classes ended.

Mondragon has arthrogryposis multiplex congenita, a condition which causes muscle weakness and multiple joint contractures. In her quest to find like-minded therapists, she has reached out to several professionals and currently uses online therapy. “My experience with able-bodied counselors have generally been therapeutic. My second counselor is an exception to that,” she said. “I don’t think he truly understood me as a disabled person. Even though my past does have a part in my mental health, my disability and mental health can be mutually exclusive sometimes.” Mondragon has tried looking for a counselor with a disability, but hasn’t had much luck. Her experience working with a math professor who is also a wheelchair user was cathartic. “It meant a lot seeing her in front of the class.”

“My disability and mental health can be mutually exclusive sometimes.”

According to Sheypuk, counseling itself can be stressful for people with disabilities and special needs because they might need a caregiver to help them meet their needs. This hardly affords them much privacy. “In my psychology practice, many of my patients have physical disabilities and I see them virtually for therapy sessions,” Sheypuk said. “Instead of having to divulge to their caregiver that they are seeing a psychologist in order to be driven or accompanied to the appointment, the patient can simply say, ‘I’m headed to my bedroom to chat with some friends on the computer.’”

Meanwhile, Srinivasan organizes regular calls with members of Soulfree in a bid to support them. The calls often involve light-hearted banter, singing, and heartfelt conversations. “These are people who are stuck indoors and never get to see the world. They think they’re being punished,” Srinivasan said. “When they sit together, even virtually and talk it out, it doesn’t feel like they’re alone.”

For people with disabilities and special needs, it’s crucial to know that their specific concerns are being heard. “As a psychologist who uses a wheelchair, many people with disabilities have reached out to me for therapy sessions because I have a physical disability,” Sheypuk told Re:Set. “People with disabilities report being tired of trying to explain [the] details of their disability to an able-bodied therapist who usually struggles to understand what it is truly like to walk in one’s shoes’ and navigate the world with a physical disability.” She cited an example: when clients talk to her about the pain of watching a caregiver quit, she knows exactly what they’re referring to and how it affects their daily life. Neurotypical therapists may not be able to understand the experiences of their clients with special needs completely which can lead to frustration, Sheypuk said.

“Which one of us has not felt some kind of depression?”

For Srinivasan, minimal access to mental health resources was a major source of motivation that led to Soulfree. She’s seen depression from close quarters and recently lost a friend to the same illness. “The [mental health] stigma is very strong,” Srinivasan said. “Which one of us has not felt some kind of depression?  Why are we so judgmental? I have no idea.”

From South Africa to India: Universities Aren’t Doing Enough to Safeguard Students’ Mental Health
‘I Describe Bipolar Disorder as a Spectrum That I Live Within’: Parents Share Their Stories