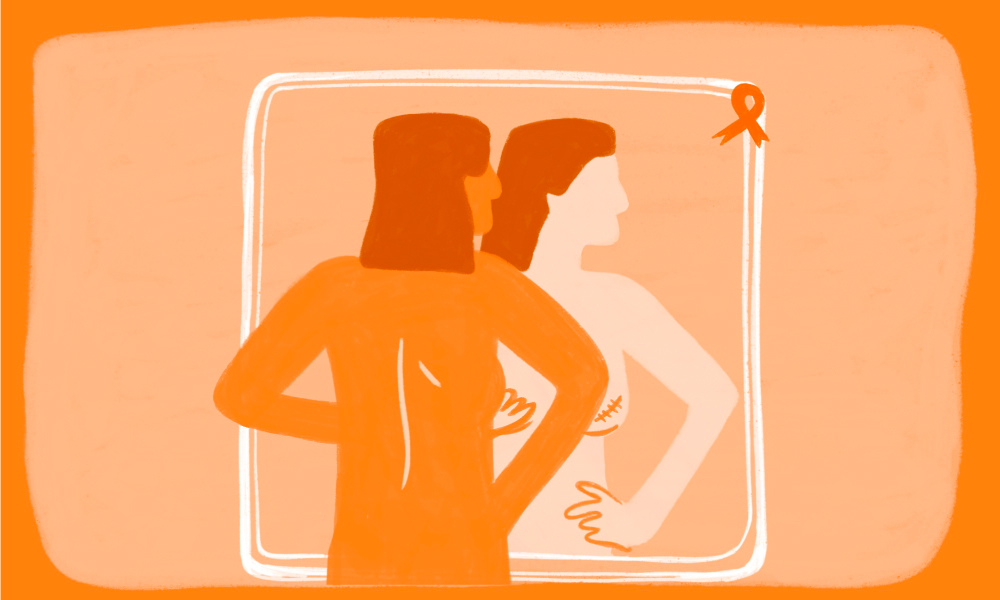 "Theoretically, the risk in trans women should absolutely increase due to an increase in estrogen levels from HRT.” Illustration by (c) Reset Fest Inc, Canada

“Oh, fantastic I had no idea! Now I’m worried and will be checking for lumps,” Taksh Sharma revealed to Re:Set. “I was under the impression that you can only get [breast cancer] if you get synthetic implants. I wasn’t aware that hormone replacement therapy (HRT) alone puts you at a higher risk for breast cancer.”

The 25-year-old Delhi resident underwent HRT as part of the gender affirmation process in 2018. She picked an endocrinologist through referrals from friends who had undergone the same procedure.

“Most of the conversation happened with the endocrinologist, and they didn’t speak about the risks of breast cancer,” Sharma explained. The doctor didn’t prepare her for how intensive the process is, while meekly passing blanket statements about a diet plan, she said. Her friends warned her about the back aches, cramps and heat flashes that come after the treatment.

“I know that conversation about breast cancer in women is woefully under discussed, as most of us are used to looking at ourselves as this ‘other,” Sharma said.

“There isn’t an awareness level [about breast implants and breast cancer] at all, even within communities.”

“People who aren’t getting surgery and just taking hormones, especially from a younger age, have a reasonable breast growth, so they don’t go for breast enhancement. For them, the risk is higher because they’re on high doses of hormones,” Dr. Aqsa Shaikh, a doctor, community health specialist and LGBTQIA+ rights activist, told Re:Set. “And since they were biological males, they don’t get screened enough.”

The most commonly used procedure for screening of early breast cancer is a mammography. In developed countries like the U.S., millions of mammography tests are conducted every year. Yet, trans patients struggle to get adequately screened. Doctors in the U.S. have spoken about problems such as difficulty in setting up screening guidelines that arise due to trans breast health not being established as a discrete area of radiology study.

In developing countries like India, the screening for even cisgender women happens only at later stages, which makes treatment more difficult. Nearly 90,000 Indian women died of breast cancer in 2018 and there is no data about trans women.

Dr. Bharat Vaswani, a Hyderabad-based oncologist, told Re:Set that not enough studies are conducted on the risk of breast cancer among trans women.

“I’ve treated some men with breast cancer but never a trans woman suffering from breast cancer,” Vaswani explained. “No one has evaluated this properly. We don’t have any data on this, and due to the low number of people going through HRT, it’s difficult to conduct a study. Theoretically, the risk in trans women should absolutely increase due to an increase in estrogen levels from HRT.”

“I’ve never seen a government program about it too. I would like to learn about it.”

Exploring the link between breast implants and breast cancer

Another subject often overlooked is the impact of breast implants on one’s health. The Food and Drug Administration in the United States recently discovered a connection between breast cancer and implants, and have planned to conduct studies on specific types of silicon. Though the overall relationship between two is undefined, again, due to a lack of research.

“A lot of trans women go for it because the presence of breasts as a marker of your gender identity.”

“There isn’t an awareness level [about breast implants and breast cancer] at all, even within communities,” Zainab Patel, a human rights activist told, Re:Set. “One big issue is trans women aren’t taught about breast examination, for lumps to look for, or irregularities in the breast tissue.”

Patel explained that a change in attitude towards how the surgeries are looked at is key. “Because it comes under aesthetic surgery, GST rates are different on it than vaginoplasty, for example, which is considered reconstructive,” she said. “Insurance companies don’t pay for them for the same reason, as they aren’t considered ‘essential.’

Patel added that the debate around cosmetic surgery is about confidence, but those debates haven’t evolved in the medical community. “A lot of trans women go for it because the presence of breasts as a marker of your gender identity.”

When asked about the responsibility of surgeons to inform those getting breast augmentation, Shaikh explained how the process of procuring implants in the hijra community and those from lower socio-economic backgrounds is broken. In India, hijras are officially recognized as a third gender and can be “eunuchs, intersex or transgender.”

“I’ve seen that most of them want cheaper breast augmentation surgery and get the surgery as a daycare surgery,” she said. “They get admitted the night before or the morning, get the procedure and are released by the evening.”

The main cost of the operation are the implants which is why many people turn to the cheaper options available in the market, she explained. They buy those implants and set the surgery with little to no consultation. The surgeon then just charges for the surgery, so the contact is very less and there’s no follow up.

When looking for breast cancer awareness programs for Indian trans women, the only one we found was conducted in 2015, by the Bengaluru branch of HCG Cancer Care, one of India’s largest providers of private cancer care. They used billboards, with slogans saying, “I was born without breasts. I don’t intend to die without them.”

“In the Ministry of Health and Family Welfare programs, why are there only cisgender women on the posters for breast cancer awareness?” Shaikh asked. Trans women should be able to get a mammography in a government hospital through the NGO they are a part of, she recommended.

“Until and unless there is an enabling environment for that, starting from educating doctors and medical professionals, we won’t see improved results, however much we shout.”

#ADHDInvasion: Meet the Collective Capturing Life With the Condition Through Quirky Comics
Lift ‘Em Up: Supporting the Next Generation of Female Leaders

Why Are Trans Women Not a Part of Breast Cancer Awareness Campaigns?