When Your Reflection Causes Suffering: The Many Struggles of Body Dysmorphic Disorder 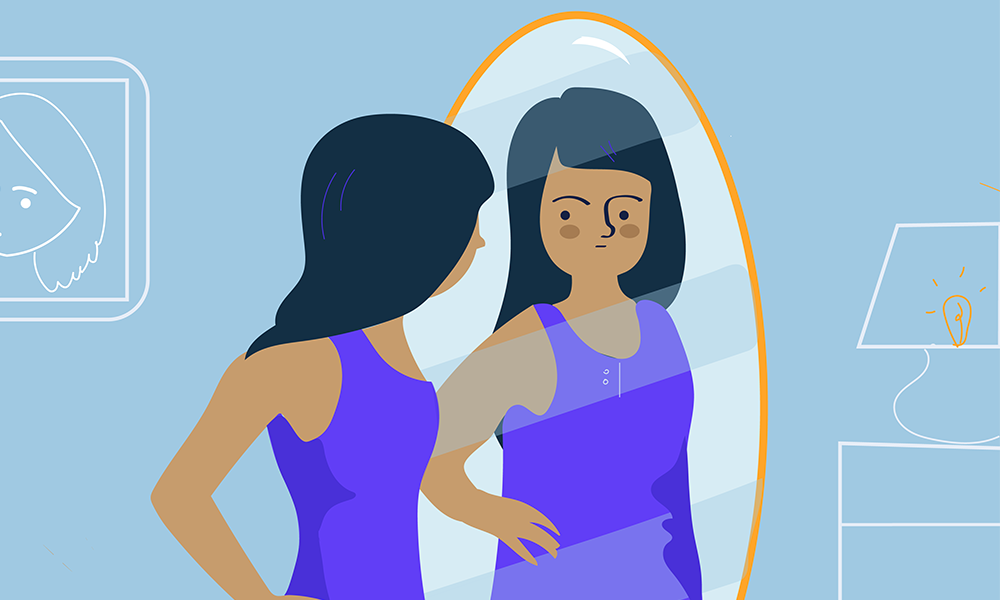 Most people have their share of bad days where they look into the mirror and don’t like what they see. However, for some, their reflection is torture, a rude reminder of their perceived flaws and imperfections that don’t fade, no matter which treatment or new age solution they try.

“I had one day during my preteen years that I literally looked in the mirror and felt so ugly that I had to force myself to choose one thing to like about my appearance. I chose my eyes, and I still have my days where I hate those too,” Rebecca Curl, a 26-year-old makeup artist from Chicago, told Re:Set. “I have always felt unattractive compared to what the mainstream feels is beautiful. I could always be thinner, more symmetrical, my teeth could be straighter, whiter,” she said, explaining that she’s battled body image insecurities for most of her life and was bullied for being overweight as a child.

This is the reality that many people with body dysmorphic disorder (BDD) live with: grappling with their faults and unable to escape their nagging thoughts. It could be the shape of their chin, the way their hips jut out or the size of their nose. They can’t stop thinking about it to the point that it disrupts their daily routine, making every single day a challenging, exhausting affair.

“I have always felt unattractive compared to what the mainstream feels is beautiful.”

According to Dr. Bruce Clark, a child and adolescent psychiatrist at the Maudsley Hospital, London and a visiting specialist at Maudsley Health in Abu Dhabi, people with BDD are fixated over one or several aspects of their physical appearance, often using compulsive strategies to feel better. “These repetitive behaviours can, among other things, include: mirror gazing, body measuring, taking an excessive number of selfies and/or researching and exploring cosmetic surgery,” he told Re:Set.

Also Read: “A Window to My Soul:” How Art Therapy Helps When Words Can’t

This clinical disorder is not completely unheard of. Around 2% of the world population is believed to have BDD. According to the Body Dysmorphic Disorder Foundation, some of the prominent signs observed in people with the condition include critiquing their looks by compulsively looking at their reflection, trying particularly hard to conceal their perceived drawbacks through tools such as makeup and obsessively talking about their physical appearance with other people. It’s essential to acknowledge that BDD doesn’t involve being slightly dissatisfied with one’s looks; it’s a constant obsession and can prevent a person from even venturing out of their home out of fear and persistent negative thinking. It can result in serious anxiety issues and may lead to depression and suicide. “BDD is commonly associated with depression, in fact up to 80% of people with BDD can be depressed as a consequence of their difficulties,” Clark said. “Suicide is another significant risk for BDD patients. Research in the U.S. estimated that 50% of BDD patients will make an attempt on their life through suicide.”

BDD is a mental health condition that can affect people of all ages including children, teenagers and adults — many patients may not even know they have this medical condition and may think they’re simply unhappy with the way they look.

According to Dr. Katharine A. Phillips, a psychiatrist and author of “The Broken Mirror: Understanding and Treating Body Dysmorphic Disorder,” family and friends get greatly involved in a complex web, struggling to help their loved one feel better. “Of the many patients I’ve worked with over the years, those with BDD have been among the most tormented,” she wrote. “Families and friends, girlfriends and boyfriends suffer as well. They worry about their loved ones and may endlessly reassure them, hold mirrors, or apply hair tonics to no avail.”

People with BDD often go down the plastic surgery route, hoping that modifying their appearance may help them feel better. In 2017, professionals performed over ten million surgical cosmetic procedures across the world, and as these become more popular, it’s essential for individuals offering these treatment options to be vigilant and learn to recognize the symptoms of BDD. Patients with BDD can benefit from professional guidance and proper intervention from qualified doctors. However, cosmetic procedures may give them little or no respite and they may experience recurring symptoms.

“I feel fat almost every day, even though I am technically a healthy weight.”

“My BDD mostly manifests in the form of my weight and weight control. I feel fat almost every day, even though I am technically a healthy weight. It’s a sickening, unending cycle of never feeling good enough,” Curl said. “I definitely limit myself in my daily life because of my BDD: I won’t wear bathing suits, and I have never really enjoyed wearing them,” she said. She stays away from pants as well because she dislikes how they fit her, making her feel uneasy and self-conscious.

“There are so many little things that I fear because of the way that I think that I look. I don’t think the average person has any idea how much anxiety BDD can create for a person,” Curl said.

According to Clark, medical intervention can help a person with BDD control their symptoms and improve their quality of life. “If left untreated, BDD can be very harmful, as the condition does not get better on its own. This is why it is especially important for a person with BDD to seek professional advice,” he emphasized.

This medical condition is thought to exist on account of several causes including genetic reasons and being subjected to abuse and bullying. Someone with BDD must always be diagnosed by a medical professional. It can be potentially dangerous to make assumptions or self-medicate in such a situation. “A lot of patients struggling with BDD tend to feel ashamed of their symptoms, and they usually go to mental health professionals with secondary conditions, such as low mood, depression, suicidal ideas and social anxiety,” Clark said. He advises professionals to be on the lookout and ask simple questions to get to the root of a patient’s anxiety.

Psychiatrists may recommend cognitive behavioural therapy (CBT) as a treatment option for a person with BDD. CBT essentially helps patients control their thoughts and teaches them to consciously avoid any harmful behaviour like constantly comparing themselves with those around them. Medicines, particularly the selective serotonin reuptake inhibitor (SSRI), may be recommended for those with more serious symptoms to help manage the condition and may prevent a relapse in the future.

“No one should feel afraid to reach out.”

Meanwhile, it’s always a good idea to keep family members and close friends in the loop as they can help a patient get through a particularly bad day and get them professional help when necessary. Practicing mindfulness can also help a person be present in the moment and curb anxiety and persistent negative thinking. “I have luckily gotten to a point now where no matter how fat I may be feeling, my mind knows that what I am feeling and seeing in the mirror isn’t true. It’s a daily struggle, and I don’t think a lot of people understand how difficult just facing the world can be on the worst days,” Curl told Re:Set.

The key to managing symptoms is to find the right fit and sticking to the coping strategies that work best for you: different methods work well for patients with BDD. Curl has taken to art, reading and writing to cope. “Everyone needs an outlet, and I am so lucky that I have found mine. I hope one day I don’t feel this way about myself, but I think the reality of it is that it will always be an uphill battle, not knowing which side of myself I will see from day-to-day,” she said. “I never sought professional help because I am stubborn, but I think if it is available to you and you need it, you should. No one should feel afraid to reach out. I wish I would have understood that when I was younger.”

Where Are Mumbai’s Disabled Youth?
A 27-Year-Old Emirati Artist Uses Moving Artwork to Reach out to Others with Depression