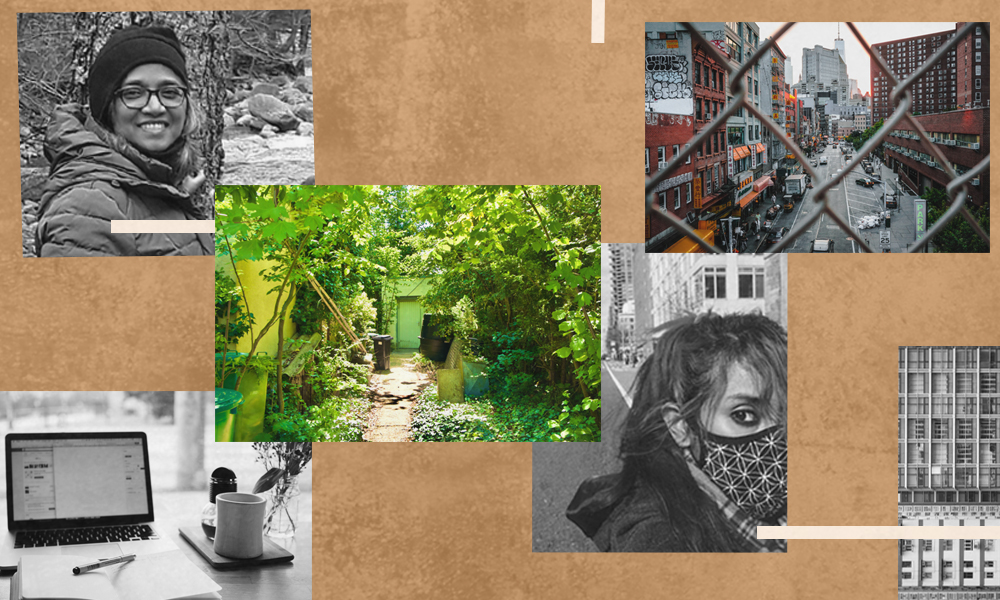 The rapid changing of circumstances around them have created intriguing questions for both Mondal and Singh to ponder upon. Photos courtesy: Mimi Mondal, Vandana Singh, Unsplash

A genre exploring elements that often do not exist in the real world, speculative fiction requires writers to dig deep into the crevices of their imagination to enthral the reader. But as the world descends into an almost apocalyptic scenario with COVID-19, numerous natural disasters, and simultaneous social movements, we asked two writers to expand on how these occurrences impact their creative processes, mental health, and hopes for the future.

Vandana Singh was born and raised in New Delhi, and currently writes speculative fiction in the Boston area, where she is also a professor of physics at a state university. Her academic interest is in the transdisciplinary scholarship of climate science and the impacts of the climate crisis.

Born and raised in Kolkata, Mimi Mondal currently lives in New York where she writes and edits speculative fiction. Read their reflections from months in lockdown, as witnesses to unprecedented social change.

Mimi: Where have you been through this self-isolation period and for how long?

Vandana: I am with family in the National Capital Region in India. I came here from Boston for a two-and-a-half-month sabbatical on a climate change-related project, which had to be changed at short notice due to the lockdown. It has been four really interesting months.

How about you, Mimi?

Mimi: I have been self-isolating in New York City. The self-isolation order became active here in the second week of March, just a day after I spoke at a conference at Columbia University called Rethinking Caste Intersectionality: Gender, Sexuality and Race. After the conference ended some other participants were going for dinner but I was too tired to join, I promised to catch up with them in the next day or two. Four months later, I still think of that day and if I would have stretched myself to join the dinner if only I knew.

In lockdown, Mondal has finally found time to attend to studies she had been putting off for a long time.

Tell me Vandana, how has being indoors and minimal socialization for all these months impacted your mental well-being?

Vandana: We are lucky to be in a house with verandas and a small garden, so the sense of being locked in isn’t as extreme. I haven’t been outside the perimeter of the garden since the lockdown was announced on March 22. While I enjoy watching birds, lizards, and squirrels, what really hurts is not being able to see close friends and my army of favourite relatives. We’ve tried Zoom chats, but it really isn’t the same.

Which makes me wonder how you are coping, Mimi. What has it been like to be in NYC with family in India?

Mimi: My parents live in Kolkata, and most of my other older relatives are spread across Kolkata and other parts of West Bengal. The Amphan cyclone that wrecked through Bengal in May was another terrifying period. It took me a staggered effort over weeks to hear back from each of my relatives, especially those who live nearer to the Sundarbans, where the impact of the cyclone was the highest.

It’s surreal to experience all this from New York, sitting in an apartment whose windows open out to more walls. For months, New York was the epicenter of the COVID-19 crisis in the entire world, and my neighbourhood has several hospitals, but from my apartment it’s hard to see anything unless you come out into the street. That absence of sound and fury has been the strangest part of this “apocalypse,” hasn’t it? The news and your brain tell you that we’re in a crisis on a never-before scale, but what you’re really looking at are your walls. You hear about friends and family occasionally testing positive for COVID-19, but instead of rushing to visit them your best course of action is to avoid them. A few people in the periphery of my acquaintance have even passed away from the disease by now. That invisible sense of doom is what I think is the biggest psychological fallout of the pandemic.

Vandana: Yes, I hear you on the pervasive sense of doom. The pandemic has exposed the ugly underbelly of neoliberal modernity — all the fault lines are clear.  It is hard to avoid feeling an inarticulate sense of rage, frustration, and despair at the state of things. I’m used to feeling this way — I study climate change! And this crisis only emphasizes the awfulness of things. But no dystopia is entirely without moments of hope and even joy. The intelligence and bravery of the daily wage workers who trekked across the country to go home, against all odds, the protests against the murder of George Floyd in the U.S. becoming so widespread, and small everyday things like hearing a koel cry out from the mango tree with clouds gathering in the sky.

I’ve long abandoned the twin traps of hope and despair.  I experience them emotionally of course, but I don’t think either is a reliable guide to a better future.

For Singh, poetry is helping her find her way back to writing.

Mimi: I love this decision of no longer taking hope and despair as guiding factors for your imagination of the future. Do you think the pandemic has affected your creative processes in any tangible way?

Vandana: I think being a speculative fiction writer can give you a kind of imaginative elasticity that is helpful when the assumptions of consensus reality break down. When people say “I could never have imagined this,” I think to myself: “But science fiction writers, epidemiologists, and ecologists have been thinking about pandemics and zoonotic diseases for a long time.” That’s not to say that it didn’t give me a bit of a shock when so-called normalcy broke down, nor could I have predicted or anticipated everything that happened. But, it took me less time, cognitively speaking, to accept that yes, a major change was underway. I think this is helpful for adapting quickly to a new situation. Plus I have been working on climate change for a decade, and I’ve been anticipating drastic change on that front for a while now.

That said, it hasn’t been easy. As I mentioned, I’ve been worrying like crazy about the state of the world. I found for about two months that I couldn’t write a word of fiction. The only creative thing I could do was to write poetry to respond to the horrors around me. There’s something about poetry — perhaps because it emerges from the unconscious, it also speaks to the unconscious in a way that prose can’t.  But I don’t consider myself a poet —  [storytelling] is my thing. I think I’ve sighted my fiction muse recently, so maybe I’ll be able to write stories again. But I know one thing: they will be different stories than I’ve written before.

“Things are changing so fast that there isn’t time to brew up an entire story!”

How has it been for you, Mimi?

Mimi: Partly because I live alone far from home and partly for my imperfect mental health, my first reaction to any bad news is always catastrophizing. And the recent bad news cycle has been rather long. As you know, it was much before COVID-19, about halfway through 2019, that I started struggling to write new fiction. I had recently started trying to write stories set in the future, among which was the story you commissioned me to write about climate justice in India, for the Arizona State University project. Last year’s protests in India over the new Citizenship Amendment Act had already clouded my vision of what a future India may look like. I usually write about people in the margins of society, who are already desperate to survive at times that are “normal” for those with more cushion. These are the people whose lives get absolutely torn apart when larger crises take place. How will their lives look in a future world when even our own low-risk, urban, middle-class lives are changing so frantically? I still don’t have an answer to these questions.

On the other hand, the sudden emptying out of my work schedule in March brought me the unexpected leisure to pick up some studies I had been postponing for years: I am finally reading up at depth the history of ancient Bengal and South-East Asia. I spent more than a decade at universities and was a dedicated slacker throughout. But now I find that scholarly reading brings me peace because the rigour it demands takes my mind temporarily off the amorphous dread of everything else outside.

“I find myself asking: What is my role as a character in this apocalypse story?”

Vandana: Wow, ancient Bengal! That sounds really interesting. I hear you about scholarly readings. I’m trying to finish an academic paper and am reading widely in climate science and climate studies. It is really relaxing to get deeply into an academic paper, to understand the logic of the arguments. As an educator, I wish that all people had access to the joy of learning.

I also try to extend myself to write about people who are more or less invisible to the upper social hierarchies, although I am very conscious of such potential pitfalls as erasure and appropriation. I love the conversations you and I had about this in the past. The terrible things that are happening one after the other basically succeeded in shutting off my fiction voice for the longest time in my life, but as I said,  poetry has helped me tiptoe back. That, and the incredible courage, empathy and intelligence shown by people on the margins of society, abandoned by the powers that be, such as the daily wage workers walking hundreds of kilometers in the unrelenting heat. I’ve been collecting news stories from their journeys, some of which leave me in awe. We are in the middle of something big. Generally, a story takes time to brew in the unconscious, and things are changing so fast that there isn’t time to brew up an entire story! So I’ve started to write very short flash fiction pieces that may or may not become woven into a larger story. We shall see.

I hope and trust that your fictional muse will return very soon, Mimi. You have such a stunning voice, and the world needs your stories. But no pressure, I promise!

Vandana: How do you see your role as a writer and thinker in the context of the U.S. protests, Mimi?

Mimi: I have been actively educating myself on both history and news, policies, and other cross-disciplinary topics that would help me make sense of all these changes, donating whatever I can to relief funds, and so on. These crises go beyond our role as artists; they ask us to reflect our roles as citizens and human beings. We are not merely observing or [storytelling], we are living inside them. I find myself asking: What is my role as a character in this apocalypse story?

Distractions and Loss: An Influencer’s First Week After India’s TikTok Ban
An Ecological and Mental Health Pandemic: How Mumbai and Kolkata Will Be Impacted by Climate Change in 2050