To the Brink and Back: Survivors Share Their Stories of Suicidal Ideation 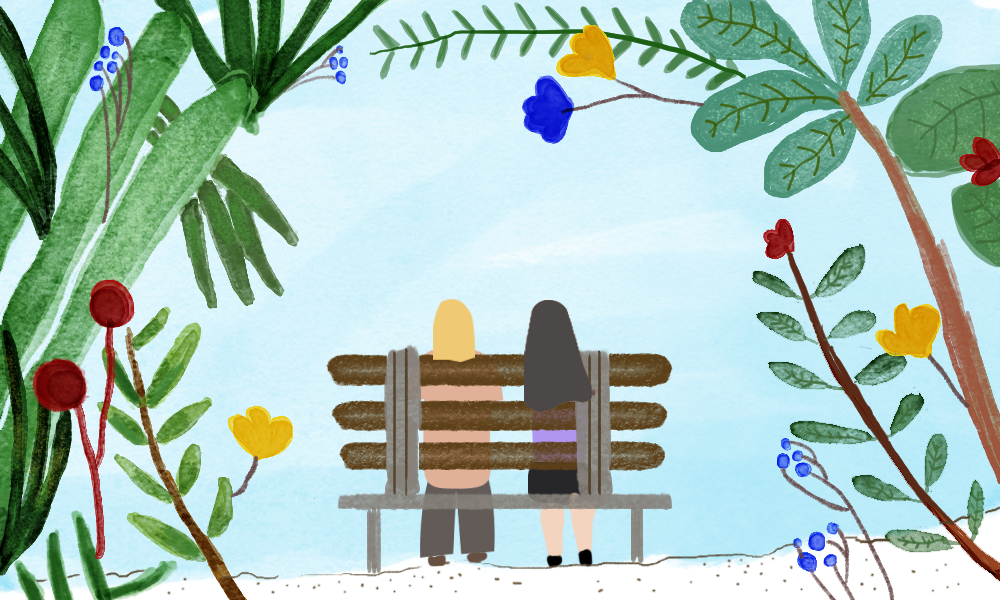 Talking about death and suicide does not automatically spell the end of the road. Illustration by (c) Reset Fest Inc, Canada.

Talking about death and grief feels highly uncomfortable for many. This is likely due to the deep-rooted stigma associated with mental health and suicide. We are sharing the following experiences of real people, and their tryst with suicidal ideation and thoughts, in the hope that you will read them, relate, and not feel alone. We are sharing them in the hope that you will become more comfortable talking about these topics with a friend, partner, therapist, parent, child, and perhaps even a stranger at a café, who looks like they need someone to hear them out. It is only through constant engagement with such thoughts in ourselves and others, can we recognize when these thoughts are simply passing through our heads, and when they are beginning to take over our lives.

In short, thinking about death and suicide does not automatically spell the end of the road. Reach out, talk, engage — it helps.

Joel Young changed his career and moved to London, but his demons seemed to follow him. Photo courtesy: Joel Young

For 43-year-old Joel Young, life wasn’t always dark. Once a DJ and promoter, he lived life freely. Young partied, stayed out late and lived a true rock ‘n’ roll lifestyle. He enjoyed every minute of it. That was, until it started to catch up with him.

It all became too much: the late nights, the fast-paced lifestyle, and the habits that came with it. This all led to a drastic change in Young’s behaviour. “I started to get edgy and paranoid, and I realized that what I was doing was not good for my mental health,” Young told Re:Set.

He decided to change his career path and moved to London. He started something completely new, taking on a social media role for “Loose Women,” a well-known TV show in the U.K. Although he enjoyed the new gig, Young wasn’t quite ready for the change in lifestyle. “I’d gone from not having any responsibilities and working a nocturnal lifestyle, to being in a 9 to 5 day job, and I didn’t really know how to handle it,” he told Re:Set. Although he’d moved cities in a bid to improve his mental health, it ended up deteriorating more. And then, things got even worse.

In the years that followed, a series of events led to Young being tormented by a man chasing him and his friend for money. Young refused to back down, but this had consequences. “He used to send pizza deliveries and taxis to my house, call me hundreds of times a day, even set up anonymous social media accounts either to abuse me online or actually pretend to be me,” Young said. His paranoia had amplified. “I felt like everywhere I turned, he was there. It led to me having a total mental breakdown.”

Young reported the situation time and time again to the police, but nothing changed. So he decided to take it upon himself to do something. Young rang the man pretending to be a police officer in the hope he would leave him alone. But it actually backfired, with Young being dragged through court and sentenced to community service.

Fast forward a few months, and the story was splashed all over the local newspapers for everyone else to see, which of course, made Young’s mental state worse. “My life was ruined. I thought I’d never work again. I had no money,” Young said.

Not wanting to cause any more upset, Young decided to keep his feelings to himself. He didn’t tell any of his friends or family. “They all had their own lives. I just felt like a burden, and I’m a man, which makes talking about these things much harder,” Young said. He didn’t want to go to Middlesbrough, his hometown, because people were familiar with his brush with the law. “There was no escape,” Young told Re:Set.

One night, it all became too much for Young, and he made a decision that he was going to try and slip away quietly. “I was very calm. I knew what I was going to do. I just felt like there was nothing and nobody there for me,” Young told Re:Set.

He did try and attempt suicide that night. But in the moment he had decided he was going to go, something happened. Young’s cat distracted him and made him realize he had to stay. “In that moment, through all that depression and fog, I realized I had to feed the cat. The cat needed me,” he said. Like a light switch turning on and off again, it became clear to Young that he wanted to be alive, and he did want to be here, even if only for his cat.

In the weeks that followed, Young took time to recover. He didn’t want to move from his bedroom and face the outside world just yet, but spent time recuperating by relaxing in bed, spending time with his cat, and distracting himself with different things every time he felt the thoughts returning.

That’s Young’s advice for anyone going through a similar experience — to distract yourself, even if for a few minutes. “I’ll watch an old episode of The Simpsons I’ve seen a 100 times. Or a wrestling match. Just something that feels comforting and will take my mind off it [the negative thoughts],” Young said. And by the time the episodes are finished, he’s back in a better head space. “In that moment, you might want to go. But I promise you, two minutes later you won’t. And one year from now, you absolutely won’t,” Young told Re:Set.

“I’d have little fantasies about driving my car off the road. I found them comforting,” said Alice Lyons. Photo courtesy: Alice Lyons

Alice Lyons, a 31-year-old podcast presenter and business owner, has grappled with depression since she was a teenager. She began to experience sudden feelings of unhappiness, which became progressively worse. “I became withdrawn and very switched off. I just felt like my brain had left my head,” Lyons told Re:Set.

They came in short bursts. I’d feel very low for a week, then fine again.

Not wanting to leave the house or socialize with anyone was a strange feeling for Lyons. She had always known herself to be a confident, outgoing and spontaneous person. The low feelings would soon pass, and she would feel like herself again. “They came in short bursts. I’d feel very low for a week, then fine again,” Lyons said. And when it came to seeking help, the intermittent feelings put a sudden halt on things. “I did question how I felt, but by the time it came to thinking I needed to see a doctor, the feelings had gone again,” she told Re:Set.

A few years later at university, things became much worse for Lyons. At 22, she recalls having suicidal thoughts regularly. “I’d have little fantasies about driving my car off the road. I found them comforting,” she told Re:Set.

Although unsettled by her thoughts, Lyons felt some satisfaction too. “I knew it was just a thought, rather than wanting to act on it. But I knew I had an exit route if things got too overwhelming, and that was comforting,” Lyons said. Once a depressive low was over though, she questioned her feelings, becoming uncomfortable with her “fantasy.” This encouraged Lyons to speak to her doctor, but she was turned away due to her emotions constantly fluctuating. “I needed to be at a steady low, all the time, to receive medication,” she told Re:Set.

So Lyons took it upon herself to see a counselor instead. She chose her therapist in particular because she was also a life and business coach. “I didn’t see the point in looking into my past, as there was no trauma or anything. I just wanted to focus on the future and [on] getting better,” Lyons said.

While counseling sessions allowed Lyons to reflect on her depressive state, she didn’t open up about her suicidal thoughts. Her counselor gave her a disclaimer form that stated if Lyons mentioned suicidal thoughts or if she was thought to be in danger, she’d refer her to emergency services. And that scared her. “They were just thoughts. I wasn’t going to act on them, and I felt like it was a really emphatic way of dealing with things, so I said nothing,” Lyons told Re:Set.

🤷‍♀️Work or play? Which to choose? . . . 💃 I just realised something. Two weeks ago, I was letting my hair down and heading out to boogie my heart out at a silent disco…. this Friday night, I’ve rushed home after a 12 hour day, jumped into my pjs and grabbed a glass of wine, ready to watch a live webinar. Nerd alert 🤓😂 . . . 😊The single biggest lesson I’ve learnt this year is that there is no ONE ‘right’ way to live your life. What’s right for you one day may be the opposite of what you need another time. You show different sides of the same damn coin, and that’s because we are all unique, dynamic, changeable people. . . . 🧘‍♀️ What’s important is learning to recognise your needs and knowing how you can meet them. Taking ownership of your decisions so that you can look after yourself first. . . . 🚀 Because when you’re firing on all cylinders, there’s no knowing what you can do 🔥🔥💪💪 . . . #motivated #friday #friyay #fridayfeeling #feelgoodfriday #fridayvibes #selfcare #selfdevelopment #workrestplay #workhardplayhard #goals #bossingit #owningit

At 25, Lyons experienced a mental breakdown. Triggered by an operation and a stay in hospital, she quickly realized she wanted to change the direction her life was headed. She started down a route of personal development, watching success stories and YouTube videos that related to how she was feeling. “It gave me confidence seeing that there were people who felt like me. It made me realize I was normal, and it was a normal thing to experience,” Lyons said.

With her newfound confidence, Lyons decided to deliver a talk in front of 100 people about her suicidal experience. With her parents in the audience, unaware of her past suicidal thoughts, this was a big deal for her. “I used this as a way of coming out about my experience; I wanted it to be a platform to talk about suicide,” she said.

Talking about her thoughts was the very last step in Lyons reconciling with her mental health battles. For anyone in a similar situation, Lyons believes one should take their time and not feel pressured to speak about it. “You have to be careful who you tell. You have to know you can trust them 100%, and sometimes talking too early isn’t always [the] best,” Lyons explained. Instead, she strongly believes in exploring one’s thoughts and using them as an avenue for personal inquiry. “Don’t feel any undue pressure to reach out immediately. Just get curious about how you feel, watch videos of people sharing their story, read books, and find ways to relate to others.” There is an expectation that as soon as someone feels suicidal, they should seek help immediately, Lyons explained, but sometimes, it can help to come to terms with your thoughts first, and if you don’t yet feel ready to speak about it, then don’t.

Above all, Lyons encourages people to recognize their inner strength. “You are much more capable than you think. We have an incredible capacity for self-care,” she said. In the depths of despair, it might not always feel like it, but you have to find your inner confidence and gain some comfort in knowing you’re not alone.

End the Endless Scrolling: It’s Time for a Digital Detox
No Longer a Boys’ Club: Stories From Women in Male-Dominated Workplaces