This Indian Restaurant Gives You a Crash Course in Inclusivity 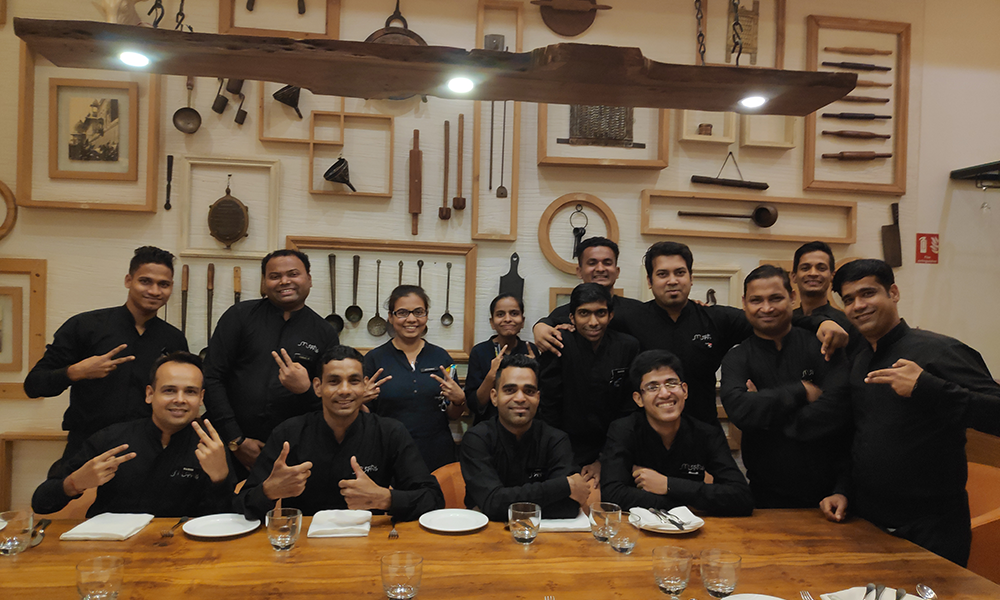 In December last year, I sat down for a meal with great expectations at a well-known eatery in Mumbai. I had confirmed my spot weeks in advance, afraid of losing out on a reservation because of the holiday season. Luckily for me, I arrived exactly on time for lunch, beating Mumbai’s infamous traffic.

The first thing that strikes you when you enter Mirchi and Mime is that you’re in a place of contrasts. While the restaurant was busy with chatter from different tables, the staff worked smoothly and silently in a peaceful setting. Nobody was rushing or scrambling to set the tables; everything was coordinated and in sync. I sat down at a table in the middle of the restaurant, taking in the views: yellow lights, low-lying lamps, eclectic knick-knacks such as chess sets and wooden crockery of all shapes and sizes on the walls.

Mirchi and Mime is a popular dining spot located in the central suburbs of Mumbai. First started in 2015 by entrepreneurs Prashant Issar and Anuj Shah and now spearheaded by Squaremeal Foods, the restaurant attracted patrons for a concept most local diners were not familiar with. Visitors use Indian sign language — primarily prevalent in South Asia — to communicate with several members of the staff, many of whom have hearing difficulties.

“Everything has got a sign to it,” Ranjan Chakraborty, Head of Operations at Squaremeal Foods, told Re:Set, explaining that their concept is based on gestures most people can recognize. For example, a person can indicate they’re feeling too cold by wrapping their arms around themselves which would let a server know that they need to turn down the air conditioner. Chakraborty, who has worked in the hospitality industry for over two decades, said the team was inspired from a restaurant called Signs in Toronto which relied on the same concept and employed staff with hearing difficulties. Currently, their team of 61 employees has 22 staff members with special needs.

Echoes, a cafe with locations in Delhi and Bengaluru, has a similar concept and has staff with hearing disabilities. Guests are asked to order using placards with specific instructions like “Water, please” that are placed on their tables.

According to the 2011 census by the Indian government, the total population of people with special needs in India was 26.8 million. However, according to the World Bank, this figure was estimated to be even higher, approximately 40 to 80 million. Actual numbers may differ on account of the societal stigma associated with disabilities in the country, and lack of diagnosis and awareness of conditions like autism and dyslexia among other reasons. Access to education for people with special needs, inclusion in mainstream schools and public spaces with facilities such as ramps for wheelchairs remain limited particularly in non-urban areas. Certain governmental measures are in place such as the disability certificate which allows people to apply for benefits including scholarships and regular financial support. There has been some progress in terms of physical accessibility in public areas including the introduction of wheelchair access in malls and train compartments for people with special needs.

Prakash believes concepts like Mirchi and Mime and Echoes are less trickier to implement because the employees don’t have cognitive challenges such as autism. According to Prakash, people with cognitive disabilities need professionals to identify their strengths and find a non-triggering space where they feel comfortable.

“In India, a lot is happening, but it’s for the first two layers of society,” Prakash added, referring to the privileged and middle-class sections of India. According to her, many educational and employment benefits don’t reach those from disadvantaged backgrounds. This is especially relevant in rural areas and smaller towns across the country. Based on figures released by the World Bank, over 66% of India’s population lives in rural spaces where an acute lack of awareness, poor infrastructure, and restricted medical access make it difficult to provide early intervention, inclusion, and training for people with special needs. It’s also much harder to collectively remove the stigma associated with disabilities and spread awareness in the country.

Priyanka Singh, a bespectacled supervisor at Mirchi and Mime, found it difficult to find employment until she was approached to be part of Mirchi and Mime’s launch team. “I didn’t have a job. I was at home,” the 28-year-old said via Chakraborty, who acted as a translator for us. She is currently the sole earning member of her family. For Mirchi and Mime, the mindset behind the endeavor was simple. People with special needs can excel at diverse jobs just like their neurotypical peers. “They are here because of the right attributes,” Chakraborty emphasized. He highlighted that it’s important for parents to give children with special needs a chance to hone their talents. “They have to leave their comfort zones,” he said.

The team has 61 employees out of which 22 staff members have special needs. Courtesy: Squaremeal Foods

To recruit their first batch of employees, the team turned to places such as Rochiram Thadani High School, for students with hearing difficulties and National Society for Equal Opportunities for the Handicapped (NASEOH), a nonprofit organization that works with people with special needs. The recruiting team discarded conventional norms such as educational qualifications and chose to focus on body language and willingness to work while finalizing their first set of employees. They also turned to Dr. Reddy’s Foundation, a nonprofit company that addresses social issues in India, and worked together to help the new employees recognize key English phrases and learn to read them among other things, to facilitate conversations with guests.

In order to make communication easier, Chakraborty and the founders learned Indian Sign Language while training the new recruits and reassured their families that their children will be safe and thrive in an inclusive environment. The employees were guaranteed assistance getting home after night shifts, stock options and opportunities for growth within the company.

To ensure a successful professional transition, it’s important to provide formal training to a person with special needs and sensitize their neurotypical colleagues, Prakash explained. “We need to work hard on creating the right kind of awareness. While everybody wants to be noble and they want to take people with special needs, the romance of it wears off,” she said. “For it to be sustainable, employability has to be planned very well.” Integration is a long process and a solid training plan that includes ways to tackle challenges including ensuring safety at the workplace is non-negotiable, Prakash added. “It takes up to a year or more for things to settle down after employment.”

When my server, 24-year-old Atul Shirke brought me the menu cards, I was pleasantly surprised as I studied the vibrant menu. It was a learning experience and we communicated using signs, with Shirke waiting patiently as I figured out the process. The menu is in the form of a well-designed, colourful, structured matrix that requires a guest to use sign language based on the instructions in the menu. They must use the appropriate sign to explain which food category they’d like to order from: curries, desserts, salads, and bread. After that, the patron simply needs to indicate the listed number of the dish on the menu. For drinks, they have to point at the one they’d like to order. “What is verbal, we make it visual,” Chakraborty said. Their menu has undergone several changes since its inception and evolved based on feedback and brainstorming sessions.

When it was time for dessert, Shirke warned me that it’s a really small serving and pointed to his stomach and closed his eyes, letting me know that he figured out there’s no room left for a big bowl of dessert.

The menu at Mirchi and Mime. Credit: Zomato

In the workplace, employment opportunities for people with special needs are slowly growing. However, there is still a major gap in terms of accessibility and opportunities coupled with stereotypes. “Word of mouth is very important because we’ve noticed a lot of companies, once they employ one student, they come back and they want another student,” Shah explained. Mann looks for available opportunities for students by keeping a track of job openings and offers to work with potential employers to find the right candidate from their cohort.

“What is verbal, we make it visual.”

According to Prakash, true accessibility also applies to recreational activities including being able to watch a live theatre performance and going for art exhibitions among other things which will encourage a more inclusive space for everyone. She also emphasized the importance of providing counseling for parents of individuals with special needs. “For them, the fear of letting go is there,” she said. “There is no life apart from their kids.”

At Mirchi and Mime, there are no signs outside or inside the eatery that indicate there are individuals with special needs on staff. They are treated like their neurotypical colleagues and the vibes are largely positive, inclusive and welcoming.

However, their journey hasn’t been completely smooth. The team faced several growing pains after they opened the restaurant. For instance, some servers like Shirke found the space overwhelming at first, struggling to stay on track with orders. With experience and practice, they were able to overcome their initial hiccups. Some guests were afraid to communicate with the staff members at first because they didn’t know sign language and were hesitant before visiting the restaurant. “There are managers who can bridge the gap,” Shirke explained to me via Chakraborty.

For employees like Shirke and Singh, the job brings a sense of security, steady income and an opportunity to challenge stereotypes as they integrate into the employment sector like their neurotypical peers. Singh is saving up for her wedding and her sister’s higher education. Shirke, meanwhile, is glad to have left his previous job behind which required him to stitch clothes at a local factory. He is planning to get married soon. Their days bring with them stability, a reliable routine and a chance to interact with more guests, serving plates of delicious food as they effortlessly hustle from one table to the next.

The Mental Health of Kids With Special Needs Is Still Overlooked
The Re:Set Guide to Talking to Your Kids About Mental Health and Suicide