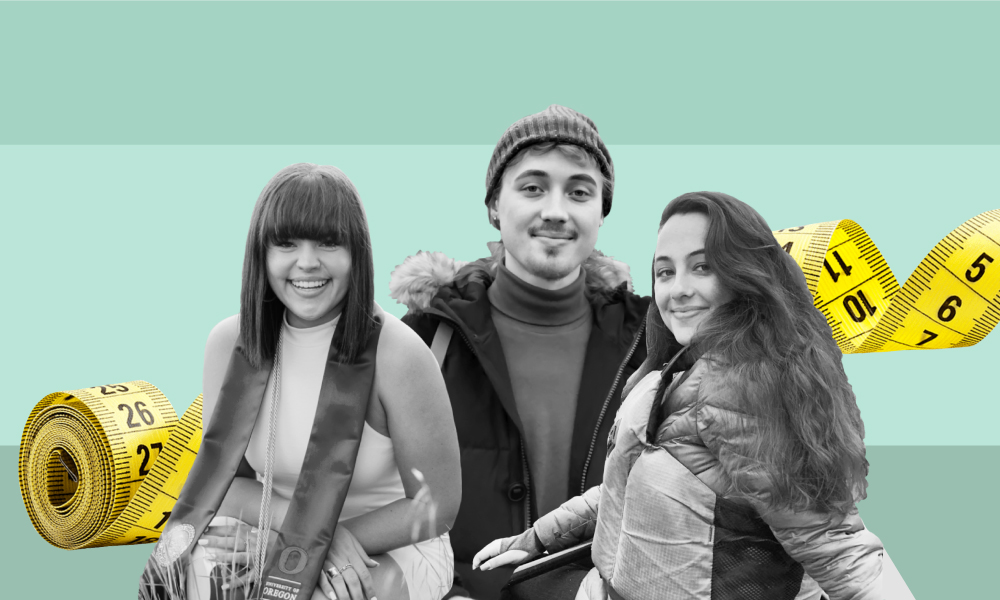 With the aim of helping others who are battling eating disorders, these creators are opening up about their own struggles and successes. Photos courtesy: Britanni Lancaster, Chris Henrie, Tina Vaughn Mueller.

From her mid to late teens, Brittani Lancaster’s life was marked by the eating disorders she lived with. At 16, she was showing symptoms of anorexia which was compounded by binge eating disorder at 18. As a result, the Oregon-based graduate experienced several different health problems over this period including vitamin deficiencies, hormone imbalance, hair loss and menstrual issues and landed in the emergency room on multiple occasions.

After graduating high school, her family was vacationing in Croatia when Lancaster realized how her disorders were preventing her from truly enjoying her time off. “I was so self-conscious of my body and restricting myself heavily when it came to food,” she told Re:Set. It was then that she pledged to take recovery more seriously.

When Lancaster’s video celebrating her recovery went viral she understood that more people needed to talk about eating disorder recovery on TikTok.

Earlier this year, the 22-year-old posted a video of herself dancing at her sorority’s event, celebrating three and half years of being in recovery and the clip went viral. “[After that] it really hit me that not a lot of people were really talking about body positivity or eating disorder recovery on TikTok so I decided to talk about it and dedicate my account to it,” Lancaster reflected. Today, she has nearly 500,000 followers on the platform where she educates people on how the disorders affect various aspects of life and “helps others find joy and peace with their bodies and food.”

Despite the stereotype that only women experience eating disorders, research shows that nearly one in every three people struggling with such conditions is male. For 22-year-old Chris Henrie, a student from New Jersey, his disordered eating behaviours began at 11 and he was eventually diagnosed with anorexia nervosa in 2014.

“I struggled to find any boys online who were openly talking about their experiences with an eating disorder and in recovery. I began posting videos online so I could be that person,” Henrie told Re:Set, adding that he has spent his time online pushing for the recovery community to be inclusive.

Henrie strongly advocates for breaking down the stereotypes that eating disorders only affect young women.

“One of the most damaging ideas is that only white, teenage, higher-middle class girls can suffer from an eating disorder,” Henrie commented, noting that it is often the only portrayal of an eating disorder many see in the media, on television, and in books. He is motivated to change that narrative and emphasizes that anybody can develop an eating disorder at any point in their lives.

For Henrie, creating this content has also aided his own recovery journey. He views his online presence as an outlet to share his story and connect with others who are enduring the same things. “It started as and still remains a source of therapy for me,” he added.

“One of the most damaging ideas is that only white, teenage, higher-middle class girls can suffer from an eating disorder.”

But being a creator in this space also comes with its fair share of challenges. Henrie often feels there is pressure to talk and act as if he has recovered and it can be difficult for him to be open about his mental health. However, he constantly reminds himself and his viewers that his recovery process is still ongoing.

“I [also] receive [occasional comments] telling me that my content is triggering,” he commented. He has also faced criticism from other users that eating disorder recovery content isn’t appropriate for TikTok, which he believes is a dangerous and counterintuitive notion. Henrie remarked that through his content, he is simply trying to illustrate life beyond the constant focus on food, weight, and calories.

Mueller believes that unless more people open up about living with eating disorders, the stigma attached to it will not reduce.

“I started making content in late March or early April, because [self-isolation] was seriously impacting my mental health, and my eating disorder seemed to be coming back,” commented 21-year-old Katrina ‘Tina’ Vaughn Mueller. The student from Houston has been battling bulimia and body dysmorphia from middle school and considers herself to still be in recovery.

Making videos was a way for Mueller to remind herself that even though she was struggling, it was all part of the recovery journey. “In high school, I felt so alone, like no one else in the entire world could possibly understand what I was going through,” Mueller said, adding that if more people don’t start talking about eating disorders, it’s just going to continue being stigmatized.

When Mueller catches herself having negative thoughts about her body, she makes a video about it because there are people out there who will relate to her experience. “There are always going to be bad days, but I’d rather people see that they’re not alone.”

An Ecological and Mental Health Pandemic: How Mumbai and Kolkata Will Be Impacted by Climate Change in 2050
Gen X to Boomers: Four Generations Share What Mental Health Means to Them