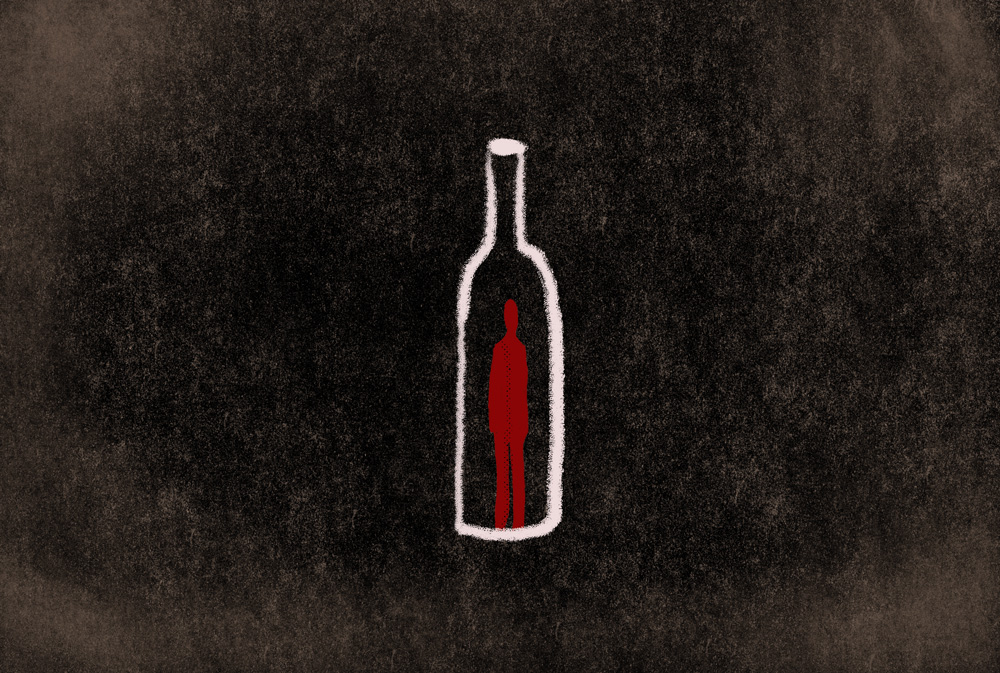 A study by AIIMS revealed that India has over 29 million people who are dependent on alcohol. Illustrations by (c) Reset Fest Inc, Canada

More people have died in Kerala over the non-availability of alcohol than by the novel coronavirus. The southern Indian state has set an example with its preparedness for the pandemic, but experiencing over six suicides linked to alcohol withdrawal was not something that the state government had accounted for.

On March 25th, the country went into lockdown to contain the spread of the coronavirus, and liquor was not classified as an essential item, therefore, bars and liquor shops shut down. Mental health professionals around the world expressed their concerns about forcing those with alcohol addiction to “go cold turkey” and warned of the risks associated with the unanticipated and unsupported withdrawal of addictive substances.

For people who are dependent on alcohol, their body will react when the intake suddenly reduces or dips to zero, said Dr. Yatan Balhara. He works at the National Drug Dependence Treatment Centre at the prestigious All India Institute of Medical Sciences (AIIMS) and is a psychiatrist and professor of psychiatry.

According to Balhara, over 60% of those with dependency issues will experience mild alcohol withdrawal for which the symptoms include tremors, anxiety, restlessness, headaches and heart palpitations. These uncomfortable sensations aren’t typically life-threatening and might be present for 10-12 days before they settle down. Balhara emphasized that complicated withdrawal, which is experienced by less than 10% of dependent people, is far more serious. In this, patients may experience delirium, seizures, and hallucinations and the condition could be life-threatening if they do not receive medical help. The discomfort caused by these symptoms may also lead someone to consider suicide, warned Balhara.

Balhara feels that in India, alcohol addiction is not taken seriously and there is a stigma attached to asking for help.

Backlash after the suicides in Kerala prompted the state government to direct the excise department to serve liquor to chronic alcoholics based on a doctor’s prescription. Once a doctor certifies that the person is experiencing withdrawal symptoms, the prescription could be used to avail a ‘liquor pass.’ Earlier this week, they also took steps to allow home delivery of liquor, sparking criticism by Kerala Government Medical Officers Association (KGMOA). An office-bearer of KGMOA told the media that this was against medical protocol and the move goes against scientific methods of treating people with withdrawal symptoms.

“Especially in the case of female addicts, the progression from onset of alcohol use to dependence is much faster.”

Balhara is in agreement stating that management of alcohol withdrawal is simple and can be administered through medication which can counter most symptoms. He believes that doctors need to be made more aware of how to handle such situations. Illegally manufactured substances like country liquor is another cause for concern, and Balhara noted that in times like this, people might be more inclined to turn to such illicit channels which can be dangerous because of the risk of methanol poisoning.

The psychiatrist feels that in India, alcohol addiction is not taken seriously and there is a stigma attached to asking for help. “Especially in the case of female addicts, the progression from onset of alcohol use to dependence is much faster,” Balhara remarked, adding that women are far less likely to seek help for such issues. “The impact on family, household, and especially on children is far greater in cases where women are addicts,” he reflected, reiterating that it is a myth that alcoholism is a problem solely faced by men.

Research by AIIMS highlights that over 57 million people in India abuse alcohol, with 29 million being classified as dependent users. Hence, steps like those taken by the Kerala government are simply stop-gap arrangements, expressed Balhara, underlining the need for the country to invest in resources and improve the treatment capacity to deal with the magnitude of addiction problems.