The Good Fight: Survivors on Battling Depression Through Human Connections 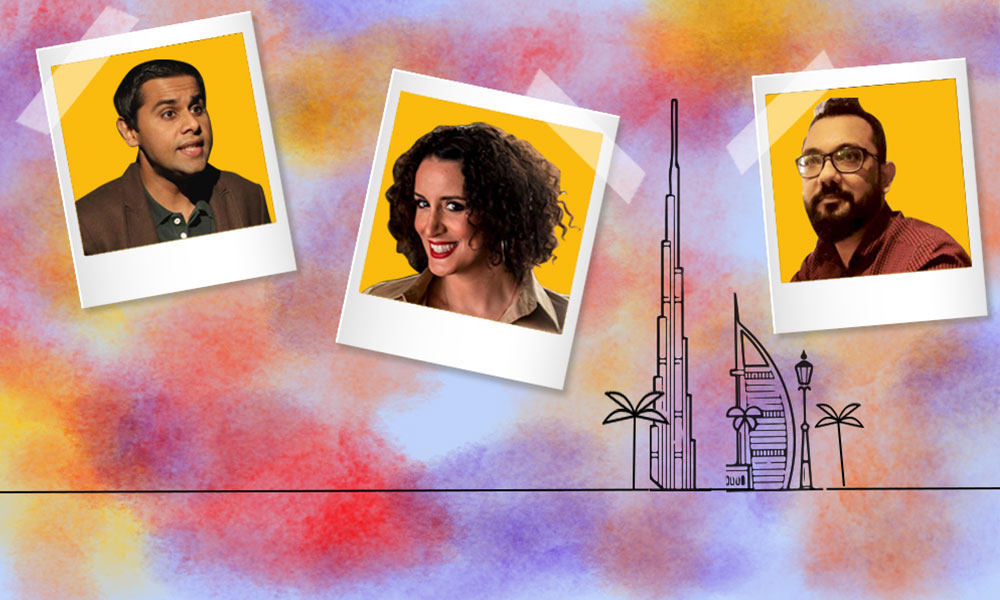 Survivors of depression open up about breaking through the barrier. Illustration by (c) Reset Fest Inc, Canada.

Four years ago, Arif Afzal visualized a petrified man, unable to move, inexplicably paralyzed by his own thoughts and demons. The 35-year-old Pakistani marketing specialist connected the dots, imagining one scene after another and wrote a film script on the debilitating effects of depression and gut-wrenching sadness. He didn’t consciously acknowledge it back then, but the script for “Nazah” (agony) was an outlet — a way for Afzal to make sense of his own inner turmoil.

“My wife knew something was wrong with me,” Afzal told Re:Set, explaining that he felt alone and helpless at one of the lowest points in his life, unable to ask anyone for help. He didn’t know who to talk to and was hesitant to approach those in his family.

Arif Afzal wrote the script for “Nazah” as an outlet for his own agony of battling depression. Photo courtesy: Arif Afzal

Afzal wanted to be a writer in his youth. High expectations from his family, financial insecurity, and societal pressure, meant that he needed to hold down a stable job in Dubai. For him, it was a combination of things such as trying to live up to societal standards, being unable to pursue his passion, and not acknowledging his inner turmoil that made things worse. As in many cultures where mental health isn’t recognized or discussed openly, Afzal felt he couldn’t have a conversation about what he was going through or even grasp what was happening to him. He explained that depression wasn’t spoken about at home and everything was attributed to a physical ailment.

“I didn’t know what I was going through.”

“I didn’t know what I was going through,” Afzal said, adding that he tried to keep a blog to help him deconstruct his feelings through the written word. It took him almost eight months to feel better. The first time he showed the script to his friend, design consultant and film director Hammad Sheikh, the latter didn’t know how to respond. He called up Afzal and told him the script had immense potential… but was he OK?

Actor Asad Raza Khan, studied many a survivor’s account to understand what it feels like to live with depression. He went on to play the protagonist in the movie, “Nazah.” Photo courtesy: Asad Raza Khan

For actor Asad Raza Khan, who played the protagonist in “Nazah,” accepting the role meant putting himself in someone else’s shoes and treading extra carefully. “I did extensive research on case studies to really understand what people going through depression feel and think,” he told Re:Set. People reached out to him after the film’s release last year and shared their personal accounts of depression with him. Khan encouraged them to reach out to medical professionals for help. “Hopefully, with this [film], people will understand a bit more of what people with depression go through. My mom also went through it, so it is quite close to me,” he said.

According to the World Health Organization (WHO), depression is considered to be a major mental health issue that affects as many as 300 million people globally.  As per WHO, some primary symptoms of depression include intense sadness, a lack of interest in activities a person enjoyed doing in the past, sleep troubles, an excessive or low appetite and constant exhaustion among others. It can severely impact a person’s life, making it difficult for individuals to focus at work and in school. Mental illnesses such as depression, bipolar disorder, schizophrenia, dementia, anxiety disorders among others can have a serious, detrimental impact on an individual’s well-being and life.

“You feel so unmotivated, you don’t want to get out of bed,” Aamnah Husain, a counseling psychologist at German Neuroscience Center in Dubai, told Re:Set.

Dealing with a mental illness like depression takes a huge toll on one’s sense of self, making it very difficult for a person to put themselves out there in their personal and professional lives, Husain said.

“You feel so unmotivated, you don’t want to get out of bed.”

A few years ago, at an Organic Cafe outlet in Dubai Mall, a British mother, Louise Hickman spotted another parent, Andrea Guy with her kids. They exchanged exhausted glances across the room, bonding over their common struggles as mothers and their preference for the cafe’s kid-friendly play area. At one point, Hickman even assisted Guy as they helped her restless baby settle into a high chair. The chance meeting gave way to a longstanding friendship and a passion project — Out of the Blues, a volunteer support group for women battling postnatal depression in the Middle East.

Also read: Self-Care Saturdays: Depression Is Like an Annoying Roommate

Hickman experienced her initial symptoms eight years ago in London after the birth of her first child. She was a career woman, focused and goal-oriented. She read books and magazines on parenting every day on her way to work, prepping for her big transition into motherhood. Hickman wasn’t expecting to feel depressed at all.

“Something was not right,” Hickman said, explaining that she knew she loved her baby but it was impossible to ignore how sad she felt. Her husband had to go back to work almost immediately after their child was born and Hickman was lost, struggling to feed her baby and learn the ropes as a new mother.

Her postnatal depression symptoms were spotted by her health visitor, who urged her to get help. Health visits are a standard practice in the U.K. and are meant to help new parents get through uncharted territory and review their child’s development for the first two years.

Hickman was receptive to her diagnosis and open to the idea of getting professional assistance to feel better. “It’s an illness, it needs to go [away],” she said, adding that based on her experience, she’s learned that most distressed people burst out crying if someone looks them in the eye and genuinely asks, “How are you?” because of their emotional build-up and long-suffering silence.

According to Husain, suppressing emotions may make things worse and cause a person to feel increasingly anxious. For someone with depression, having a conversation about mental health can be tricky. “When you’re struggling, you don’t want to go around talking about it,” she said, adding that people often unknowingly make fun of someone’s pain without realizing how exhausting it can be to live through it. “I wish someone would come in [for help] earlier,” she said, explaining that many people wait for too long before seeking professional advice.

It’s crucial to teach children to talk freely about their emotions and not encourage harmful stereotypes from an early age, Husain emphasized. “For boys, there’s an expectation they should fix their issues. Being aggressive is acceptable but crying is not.”

According to WHO data, 13% of women across the world battle mental health illnesses post delivery, most notably depression. Postnatal depression is characterized by several symptoms after giving birth such as constantly feeling low, persistent exhaustion, sleep issues, trouble focusing on tasks and unable to connect with one’s baby among others.

“People won’t speak out about this,” Hickman said, adding that women who reach out to Out of the Blues often ask them to not divulge any information to their family members. Depression remains highly stigmatized and many women who go through postnatal depression are afraid to be vocal about their feelings lest they be subjected to judgment and criticism. They’re also petrified of being separated from their baby. “It’s so hard to break through the barrier,” Hickman told Re:Set. They arrange regular coffee mornings for new mothers in Dubai to talk about their mental health and direct women with postnatal depression to trustworthy doctors who can offer helpful professional advice. They also make exceptions for women who can’t afford coffee meetups and join them at metro stations in the city instead, offering them unwavering support.

“It’s so hard to break through the barrier.”

When it comes to mental health, generalizations are futile. Every person’s mental health journey is unique. Mina Liccione, a Dubai-based American stand-up comedienne, lived through a terrible accident at age 19. A friend’s misjudgment caused her to fall off a trampoline. The accident crushed some of her ribs and led to a collapsed lung, whiplash, and serious internal bleeding. “At the time, I had a dance scholarship which was put in jeopardy since I had to take at least one semester off to heal. My doctors, and family, were worried that I’d fall into a deep depression and suggested I speak to a therapist. I did,” Liccione told Re:Set. Her experience with the therapist wasn’t positive as he urged her to consider other options in case she never recovered from her injuries. “I didn’t want to hear that. I couldn’t bear the thought. It was all I worked for since I was three and I couldn’t give up. His words actually were the fire that motivated me to push myself during occupational and later, physical therapy,” she said. Five years later, she sent Broadway tickets from her show in New York to the same therapist.

Several years later, another therapist addressed Liccione’s physical and emotional problems and helped her quit smoking for good. “She was very kind, friendly, smart and discussed all aspects of my life and how smoking was related. She helped me a lot and I’m happy to say I’ve been smoke-free for a decade,” Liccione said, adding that it’s crucial to talk about one’s emotions, no matter how confusing they may seem. “There’s nothing worse than feeling like you’re all alone and that no one understands. I’ve learned that the root of almost every anxiety and stress is fear and that talking about it helps put things in perspective,” she said.

According to Husain, the equation between a therapist and their patient is complex and dependent on several factors such as where they’re from, their past experiences and their value system. “I don’t think therapy should be very directive. Advice giving should be minimum,” Husain told Re:Set, adding that the therapist should help a patient manage their symptoms without telling them what to do with their life. “The person is coming to you for hope, for a different perspective. It is a partnership. The decision-making should be solely the client’s,” she said, stressing that nonjudgmental acceptance is important.

“I don’t think therapy should be very directive.”

When it comes to the stigma attached to mental illnesses, Husain believes people of authority, celebrities and friends can make a difference. “When influencers talk about mental health, it starts to affect the population,” she said. The psychologist also encourages people to educate themselves on mental health if they know a loved one is battling mental health problems.

A mental illness like depression can make a person feel completely helpless and alone, making it extremely difficult for them to share their pain with their loved ones. After watching “Nazah,” a viewer posted a poignant comment, deeply affecting Sheikh and Afzal. “As someone who has suffered through clinical depression personally, I can’t tell you how powerful this is,” the viewer wrote. “One of the most painful parts of the experience [depression]  is your inability to explain your inner monologue to others. Sometimes you wish you had a physical disease — like cancer — so loved ones can understand and get professional help,” he added.

Perhaps more sensitivity and empathy, spreading awareness about mental illnesses and normalizing conversations around the topic by being vocal about it will help alleviate the stigma. What else can be done? Pop culture, powerful music, movies and more that address mental health with all its layers and complexities.

‘Just man up:’ Postnatal Depression Among Fathers Is Still Not Taken Seriously
End the Endless Scrolling: It’s Time for a Digital Detox