The Financial Burden That Comes With Seeking Therapy 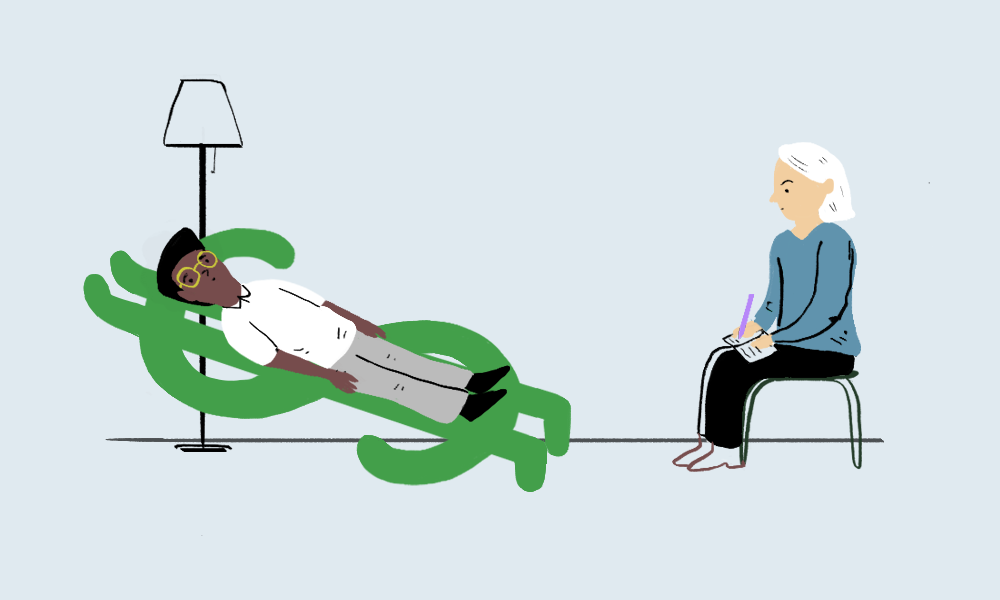 The first time Kristina Lee sought help from professional counselors, she was 14. The 22-year-old writer from Montreal, Canada decided to safeguard her mental health after surviving an assault. Talking to counselors and social workers helped Lee come into her own and acknowledge that she needed to get away from an oppressive home environment. She signed up for foster care and started a new life.

Things improved considerably for Lee as therapy helped her find an outlet for her emotions. “My psychologist was there for me in a way no adult had ever been,” Lee told Re:Set. “It [counseling] helped me a lot and I wouldn’t be here today if it wasn’t for that.” Two years ago, she read up on complex post-traumatic stress disorder (PTSD) and was motivated to ask for professional help again after going through a rough patch. Lee realized she could try different types of therapy and not be restricted by traditional methods. “I was ready to try it all, but I had no idea where to start and I didn’t have any money,” she reflected. “I’m still in the same situation, but now I have a savings account with money I plan to use for therapy once I can afford at least a full year.”

“My psychologist was there for me in a way no adult had ever been.”

While she is currently undergoing therapy, money remains a barrier for seeking the kind of regular support she’s looking for. A session with a counselor costs CAD $80 (~ $60 USD) to CAD $150 (~ $110 USD), according to Lee. The costs vary in different provinces and can be as high as CAD $220 (~ $163 USD). Lee’s health insurance at work covers only enough to last three to five sessions with most local licensed psychologists. She has tried several options including signing up for 12 free sessions offered by a provincial program in Quebec, approaching a local center for victims of crimes and trying out 22 free sessions offered by the Canadian government via non-insured health benefits for minorities. “I’m so lucky I have access to this service, however, I’m almost done now and I’m a bit anxious that I may not get accepted for more sessions especially since I want a different therapist and a different [form of] therapy,” Lee admitted. “It will take years until I can afford a year of the therapy that I want every week.”

Mental illness remains one of the most pressing issues globally. According to the World Health Organization, over 350 million people across the world are tackling depression. “Mental health conditions are on the rise in every country in the world, damaging our economies, societies and physical health,” Elisha London, founder, United for Global Mental Health, a UK-based organization that focuses on promoting mental health awareness and providing resources, told Re:Set. “Over three-quarters of people with mental health conditions in low and middle-income countries receive no support at all.” London believes that mental healthcare can be made more accessible through widespread training and proper support. She cited an example: the Friendship Bench project in Zimbabwe is an initiative meant to make mental health services more inclusive. It provides basic counseling training to female health workers and volunteers who work with people in need of talk therapy. The sessions are free and accessible to everyone across the country.

When it comes to affordable therapy, some countries are more inclusive than others. For instance, in the U.K., the National Health Service (NHS) offers free mental health support to citizens. In Norway, psychological support for children is fully covered by insurance while medical professionals in public hospitals have restrictions on how much they can charge for each session. In Germany, residents are offered public and private insurance plans which are compulsory for everyone. While tricky in terms of waiting periods for appointments, this makes it possible for someone from a low-income background to see a mental health professional at affordable rates.

In India, sessions in most cities including Mumbai and Bengaluru begin from ₹1500 (~ $21 USD) and can go up to ₹5000 (~ $71 USD), depending on the location and services offered. In 2017, the Mental Healthcare Act made it compulsory for mental illnesses to be taken as seriously as physical ailments and be covered by insurance. However, implementation on a national scale remains a challenge as insurance companies scramble to adhere to the new policies. Earlier this month, the Insurance Regulatory and Development Authority of India (IRDAI) released guidelines for local insurers to offer reimbursements for mental illnesses.

Paras Sharma, an Indian mental health professional and founder of The Alternative Story, a platform that offers inexpensive counseling including a pay-what-you-want model to patients in need, thinks there’s a huge gap that needs to be filled. “If the clause on insurance were to be implemented which is only a matter of time now, it is most likely to cover inpatient admissions but not outpatient [mental health] services,” he told Re:Set. “I don’t think counseling psychologists will be covered at all.”

There is also a disparity in terms of the availability of services at reasonable price points. “You either have people who are willing to access therapy, but can’t because there’s a bottleneck in the number of free services available or there are people who are not able to access therapists who are actually available because they’re priced out,” Sharma said, referring to free hotlines and online options like iCall that are often saturated by the demand for their services. “The idea of pay-what-you-want was to reach out to marginalized people in non-urban areas or people in urban areas who didn’t have access to [transport or accessible therapy],” Sharma explained. While their slots are available on a first-come-first-basis, their team makes exceptions for patients who are in financially vulnerable positions and need help.

A lack of access involving mental health support and affordability including insurance support are widespread. In Nigeria, a country that continues to face extreme stigma and misconceptions related to mental illness, mental health insurance is non-existent. A session at a government facility can cost 3,000 to 5,000 naira (~ $8 USD to ~ $13) while a patient may pay 10,000 to 25,000 naira (~ $27 USD to ~ $69 USD) at a private service, according to Mentally Aware Nigeria. The monthly cost of living for a person, excluding rent, is estimated to be 195,303 naira (~ $550.15) in Lagos.

We won’t stop spreading awareness about mental health. To join us as a volunteer, kindly visit this link or send us a Dm https://www.mentallyaware.org/become-a-volunteer/

A post shared by MentallyAwareNigeriaInitiative (@mentallyawareng) on Jun 3, 2019 at 5:28am PDT

“Honestly, a lot of work has to be done. Ranging from a mental health bill to increased numbers of trained mental health specialists and facilities, mental health insurance and so on,” Jolaade Philips from Mentally Aware Nigeria, told Re:Set. Therapy in Nigeria is currently expensive and also hard to find while the stigma around mental illness is rampant in the country, she explained. An outdated mental health bill called ‘Nigerian Lunacy Act, 1958’ still exists and hasn’t been replaced by a new law. Mentally Aware Nigeria works on spreading awareness while offering pro bono counseling options to those in need. They also have a database of mental health counselors at several price points which they recommend to clients along with a hotline which they monitor for emergencies.

Making affordable therapy a reality across the globe is difficult as each country faces its own set of challenges including insurance coverage, cost of living, diagnosis, accessibility to services, stigma and the urban-rural divide. While a sliding scale system exists in countries like Canada and the U.S. which allows clients to approach a counselor and pay what they can afford, it presents its own set of limitations such as patients being unable to consistently pay the same amount for each session or that the minimal amount is out of reach for those from disadvantaged backgrounds. “It’s [therapy] very expensive,” Lee told Re:Set. “Even the therapists who do sliding scale will often be $80 at the lowest.” She believes it’s not going to get easier. “Just knowing I will have to save up, and that it will take so long when I need the therapy right now, is so discouraging,” she said. “I feel like what’s the point?”

Why the Stigma of Therapy Is Multi-Layered for People of Colour
Self-Care Saturdays: It’s Time to Declutter