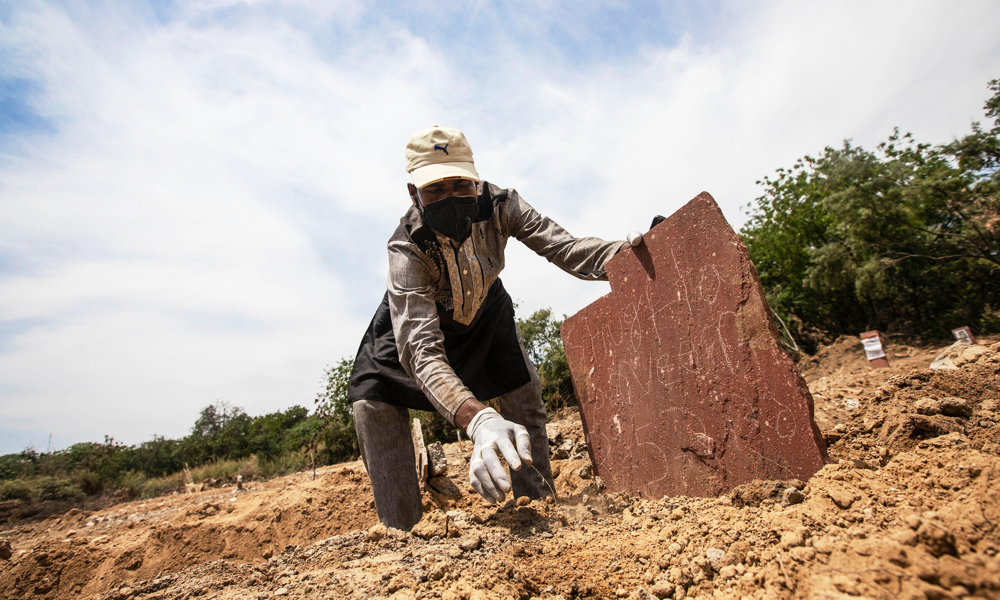 "Now if I call the police and it becomes a brawl, we’ll get beaten up, or just get the virus.” Photo courtesy: Vijay Pandey

Mohammed Shameem wakes up at 6 am every day in his solitary room adjacent to his house and gets to work in an hour. In the pre-coronavirus days, as a supervisor Shameem had a staff of four to help him bury those brought in to the Jabid Qabristan Ahle Islam in Central Delhi, but now he’s left with only two helpers. No one wants to touch the dead bodies of those who have succumbed to COVID-19, so he and those remaining have to do everything, from digging to burying themselves.

New Delhi has over 11,000 COVID-19 patients and over 150 deaths. Hospitals are in disarray, with staff at one hospital being asked to vacate quarantine premises. There is even confusion over what is a COVID-19 related death in the state, with the government changing guidelines and asking hospitals to not test dead patients for the virus. The deaths continue and the bodies end up at one of the designated cemeteries, like the one Shameem works at.

“The first patient just arrived one day, and I was told the cemetery has been assigned as one where COVID-19 patients would be brought in,” Shameem told Re:Set. “People were scared, and didn’t know much about the virus so they came in small groups. Now 10-15 people come for burial, ignore guidelines and if we tell them to follow the rules, they misbehave with us. There’s no security provided here.”

Shameem is 38-years-old and has four daughters between the ages of 11 and 15. He also has elderly parents living with him in his staff quarters near the cemetery. He’s a third generation cemetery worker, but says he is scared for the first time in his life.

“When these bodies started coming in, I too declined,” Shameem remembered. “We all just knew that this was a very dangerous virus and no one wanted to take it home. But when everyone declined, I took the job because someone had to do it.”

“Earlier I could bury five people and not feel tired, now even two is difficult.” Photo courtesy: Vijay Pandey

Shameem and his colleagues haven’t had any support from the state government, and after nearly two months, received personal protective equipment (PPE) from the Municipal Corporation of Delhi. Before that, they were using whatever the hospitals sent with their dead. He didn’t even receive instructions or training on how to bury COVID-19 patients.

“People who come to burials don’t wear PPE and want to see the proceedings. When I tell them to cover up, they…say that the virus is nothing,” Shameem lamented. “When I complained to our committee, they asked us to call the police. Now if I call the police and it becomes a brawl, we’ll get beaten up, or just get the virus.”

Shameem was paid ₹100 ($1.32 USD) per “normal” dead body they buried, but he hasn’t been quoted a price for burying COVID-19 related bodies. He doesn’t even know when he’ll get paid. Some friends from around the city are sending his family food to eat. “Earlier I could bury five people and not feel tired, now even two is difficult,” Shameem lamented. “I haven’t played with my daughters in two months, I’m so tired I just go home, eat and sleep.”

Shameem and his crew have largely been overlooked and are scared to talk about their problems, worrying backlash.

“We too are frontline workers,” Shameem said. “Our work is done in the open heat. We don’t have any health insurance. We tried to help but are just feeling more and more helpless every day.”

Also read: COVID-19: Inside the Life of Indian Teachers