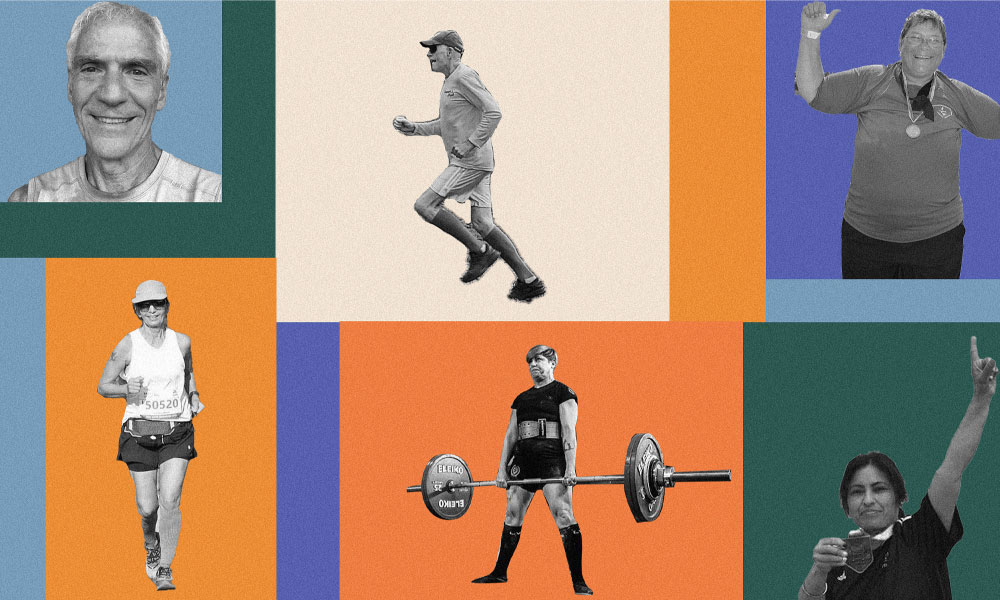 For many individuals, age is no barrier to staying fit and pursuing activities such as running and powerlifting. Illustration by (c) Reset Fest Inc, Canada

Fitness can be ageist. Instagram posts and ads for calisthenics continue to focus on younger individuals. But what about those aged 50 and older? It’s never too late to prioritize physical and mental health and pick up a pair of dumbells or go for a jog in the park if you can. In a bid to decode what fitness looks like beyond a certain age, we spoke to several individuals across the globe. Here is a glimpse.

For Goldberg, fitness is a natural pursuit. “I’ve always enjoyed strenuous physical activity and been fit. I played hockey till I was 55,” he told Re:Set. “[Exercise] just makes me feel good.”

Goldberg noticed many of his peers discounting fitness as they grew older. “As a group, I see them slowing down and stopping. Sometimes, I wonder whether people stop just because their friends stop,” he mused. “I was lucky I never felt the need to conform…I just kept going.”

Currently, Goldberg is into running and plans to participate in a marathon sometime this year. He’s preparing for it by running in cold weather to push his boundaries and evolve. He also likes to switch things up and experiments with weightlifting and yoga. “I listen to my body…whatever it is that I feel like doing, I do,” he said. “I can still climb stairs, lift. I don’t feel like I have any limitations…you feel so relaxed and at ease [after a workout].”

For Karen Barry, being a competitive powerlifter was unplanned. “I didn’t play any sport when I was growing up,” she told Re:Set. In her forties, she felt like she ought to shed a few kilos and become healthier. “I was a couch potato. [That changed a couple of years after] my father died of lung cancer at the age of 60. I took a good look at my life and decided that I want to be fit and healthy.”

She started walking, running and signed up for bootcamp classes. “When I was 47, I picked up a barbell for the first time and instantly knew that that was something I loved,” she reflected. Barry knew she’d discovered her passion. “It gave me a sense of confidence and strength knowing that I could do this. While there were other women in the gym, there were mostly men [lifting]. I was lifting as much as some of those men. It gave me a huge confidence boost.”

Earlier, her life often revolved around her kids and work. Once they grew up, she struggled with the free time she suddenly had. Powerlifting was a refreshing start for Barry.

She currently trains four days a week for three hours at each session and tries to eat clean. Working out helps her relax after particularly long days. “It [lifting] is great for your mental health,” she said. “If I’m having a bad day, I walk into the gym and within five to ten minutes, whatever is going on outside is gone. It’s a safe way to destress…and enjoy the moment.”

Competing later in life doesn’t scare Barry and she wants to continue pushing herself. “I don’t think age should be a barrier to anything. It’s a personal thing — the way you look at life,” she added.

Former running coach and teacher, Robert O’Rourke wanted to feel fitter when he resumed running in 2012 after a long coaching career. “I had no goals but to improve my fitness at the time,” he told Re:Set. “Eventually, I began entering local races and finally, the New Jersey Senior Olympics. As my fitness improved, I found that I was one of the top finishers in my age group in almost every event I entered. This inspired me to keep going.”

“The effects of daily exercise are undeniable.”

His experiences motivated him to start writing a blog about his running. Logging in every day and mapping his runs meant that he would keep going and stay consistent for years. “Logging has produced many rewards. Knowing that people follow my blog keeps me committed to not [disappoint them],” he said. “The ability to look back over the months and years to check my training and my experiences is also very exciting.” Many athletes and former students have reconnected with O’Rourke via his blog which is extremely fulfilling for him.

He works out every day for an hour to 90 minutes and includes diverse activities such as swimming and biking whenever possible. His thoughts on aging and fitness have evolved over time. “I’m convinced that it is completely possible for anyone to stay fit if they develop a routine,” he said. “Consistency is key.” For O’Rourke, writing about his runs is therapeutic. “The effects of daily exercise are undeniable. I feel like I am rejuvenated every time I run and take the time to write about it.”

“I’d just gone with my friends…we had a reunion…I was looking at them [and was taken back],” Pushpa Bhatt, a competitive runner, told Re:Set. She bumped into some of her former school friends and realized that most of them have decided to slow down and not take fitness seriously, eating without being mindful and neglecting their physical health. For her, choosing fitness was a conscious choice. “The older you get…the harder you have to work at being fit,” she told Re:Set. After being diagnosed with arthritis several years ago, Bhatt started taking fitness more seriously which helped her cope with her symptoms. “It [arthritis] isn’t there anymore,” she said. “Running has helped me.”

Bhatt’s commitment to staying fit has pushed her to work with an online coach, join running groups to socialize with other runners, follow a gluten-free, clean diet, and prioritize herself.

She goes running outdoors each week, witnessing endless sunsets. “You know, it’s so amazing…I cannot tell you,” Bhatt reflected. “You have to be a runner to experience these things.” She’s found the exercise to be endlessly cathartic and a constant, unfailing companion. “If I don’t run, I feel so miserable. I once missed my Saturday morning run and I felt so uncomfortable, I went out running in the middle of the afternoon,” Bhatt laughed. Her latest feat? Finishing 72 kilometers in Leh, India last year at the Ladakh Marathon, nearly 3,500 meters above sea level.

“I don’t believe that older people can’t exercise [or that] they just might be limited to the type of exercise they can do,” Maryann Gonzalez, a Special Olympics athlete who plays nearly ten different kinds of sports including volleyball and softball, told Re:Set. She has been with Special Olympics for over 45 years and thinks it’s essential to challenge prevalent attitudes towards aging and fitness, particularly for those with special needs and disabilities. “Our body is the same as anyone else,” Gonzalez said. “I would like people to think of me as the same as anyone else and [someone who] can do sports like most people.” Special Olympics, she added, offers sports, keeping in mind different ability levels in a bid to be as inclusive as possible, allowing everyone to compete.

“Our body is the same as anyone else.”

“We are working on getting our athletes to work out more and be more active, whether it’s walking or low impact sports to help them keep fit,” she said, commenting on how she and her team are challenging stereotypes associated with aging and fitness. “I believe that you can stay fit and healthy at any age with just little changes to your health and eating habits.”

For Harmander Singh, 60, the local running club has been a go-to stressbuster. Inspired by his group’s support, Harmander has finished 161 marathons throughout his running career and tackled 19 runs last year. “In terms of age, we have no barrier,” Harmander told Re:Set, explaining that the club, Sikhs In the City, is open to all and strives to be inclusive. For one of the founders of the group, Fauja Singh, often referred to as one of the oldest marathon runners in the world, running was a way to cope with tragedy. Fauja lost his wife, son, and daughter in quick succession years ago. “He took up running as a way of distraction,” Harmander said. “And he feels that saved his life.”

Fauja’s dedication to running has inspired many runners in London, including Harmander to be consistent and stay disciplined. “If you have a routine, that really helps,” Harmander reflected. “Running is my therapy, my escape…having a routine everyday has allowed me to have a really healthy life. ”

Also read: From a Photo Project to a Support Group: Fighting the Stigma Attached to Alzheimer’s

Another member of the group, Jaswinder Kaur Flora decided to take up running after losing her aunt to a heart attack. Flora struggled to cope with loneliness and health issues such as high blood pressure, and was advised by her doctor to find ways to get back on track through physical activities. “Unwillingly, I started to walk in the park, which felt so good. Slowly, I [started going on] regular walks and it helped me take my mind away from the sad memories.”

After spotting an advertisement for a run from Sikhs In the City, Flora decided to give it a shot with her friends. Flora managed to train and complete an ultramarathon in 2018, running for 50 kilometers. “There were many hurdles to get this far, like waking up early in the morning, family and work commitments,” she said. “ But I think once you put your mind in, you can achieve anything.”

All Fogged Up: Women on How Periods Affect Their Productivity
One Day at a Time: My Mental Health Journey Since I Stopped Antidepressants

Fit at 50 and Beyond: Stories From Fitness Enthusiasts on Tackling Stereotypes