Reflections from People of Determination on Mental Health, Disabilities and Healing 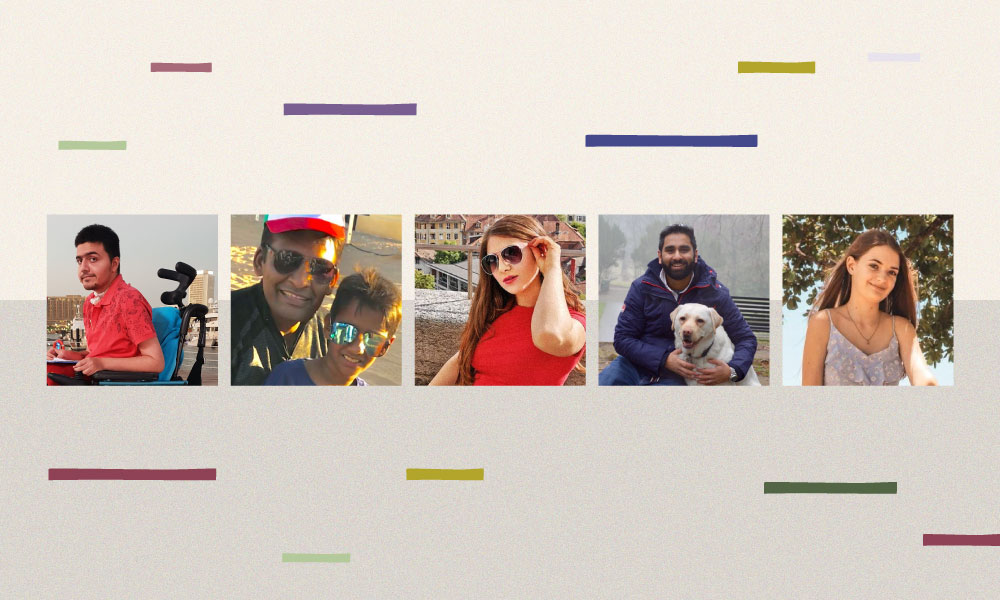 From a British doctor being denied access to restaurants with his guide dog to a Swiss student reflecting on what it’s like to be treated differently and how it impacts her mental health and the challenges linked to living with a chronic illness, we spoke to individuals with special needs across the world to find out about their stories and experiences.

Amit Patel lost his eyesight seven years on account of unprecedented eye bleeding and nerve damage. He was left searching for answers. “I [didn’t] want to be a burden on anybody,” Patel told Re:Set. He had many questions like, “[Will] I need someone to look after me?”

“It is very difficult to open up to someone.”

While initially uncertain, Patel decided to confront his situation and is now a strong mental health advocate. “The reason I talk a lot about mental health, about the way disabled people are treated because on [this] journey to where I am now, it wasn’t easy,” he explained. “People would look at me and dismiss me.”  He’s also intent on inspiring more men to speak up about mental health. “I had some very good people around me when I lost my sight,” Patel reflected. “A lot of people don’t….it is very difficult to open up to someone.”

What is Patel’s way of looking after his mental health? He likes to put a positive spin on even negative experiences by proactively taking action and knowing he’s doing his best. “If I‘ve had a bad experience on a commute to work, I like to use social media to show how difficult it is to be a disabled person trying to navigate a world made for sighted people,” Patel told Re:Set. He has also worked with organizations to ensure equal access in public spaces including being allowed to enter with his guide dog. “I like to work with that business to ensure it doesn’t happen again to anyone else,” he added.

At age 16, Chiara Schlatter had an accident that left her with paraplegia. Schlatter slowly learned to tweak her daily routine. “I didn’t even know what to think or how to handle this situation,” Schlatter told Re:Set. “I just wanted to finish rehab and go back to my normal life.”

Schlatter relies on her friends and family for support. “I have to create a healthy balance between spending time with people who know me and going out in public,” she said. “People who already know me don’t ask questions about my disability. Before I go out, I try to prepare myself mentally for all possible scenarios….I just tell myself I’m a normal person who goes out,” she added. She’s able to stay calm and not take inquisitive comments personally when she’s given herself a pep talk beforehand.

“People who already know me don’t ask questions about my disability.”

Schlatter wishes that people would quit stereotyping. “Sometimes, people assume that my whole life is about my disability. That’s obviously not the case,” she said. “I’m not sick or anything like that. I can work and study like anyone else, except for the fact that I need a little more time for myself.”

Budhrani was diagnosed with muscular dystrophy when he was 9-years-old. “It was a really difficult time,” Budhrani told Re:Set. “We went through the trials one by one. The main thing that helped us was that accepting it [the situation] the way it was.”

While the artist and his family initially focused on finding a cure, they eventually chose to work on his quality of life instead. For Budhrani, it’s essential to not let criticism get to him. “A person with a disability can be teased [or] bullied,” he said. “For a person of determination, [they] sometimes have to go the extra mile to get what they want.”

Budhrani consciously turns to his life lessons as a  form of self-care. “The little things in life make a big difference,” he told Re:Set. “I think about all the things that I can be grateful [for] instead of thinking [about] what I don’t have.”

Also read: Why Therapy for People With Disabilities and Special Needs Requires a Makeover

The first time Elina Passant experienced pain, she was only 8-years-old. “My body was never quite right after that,” she told Re:Set. The Queensland-based blogger experienced intense bouts of anxiety growing up. A severe episode left her sick in bed for an extended period. “I struggled a lot…because I couldn’t leave the house, was in a lot of pain and used to be extremely sick day in and day out,” she said. She was eventually diagnosed with allodynia, a combination of chronic pain and irritable bowel syndrome.

She picked up writing as a way to express herself. “I ended up helping other people and connecting with others and I realized how much bigger it was than just [me],” she said. To this day, Passant regularly writes about her struggles. “I think the biggest struggle with chronic illness is …the fact that you can’t see things and [end up] blaming yourself when in reality, it’s not in your control, it’s your body and you are doing the best you can…in that situation,” she said.

Life changed for Falgun Shah after a train accident in 2001 in Baroda, India. The chartered accountant lost his legs and spent one year recovering from his injuries. While working on his rehabilitation and focusing on his future plans, he lost his dad and relied on his mom and wife for emotional support.

Eventually, after tackling several challenges such as building back his self-confidence, he started working on his business and moved to Dubai. “It took me one to one and a half years to realize that whatever we need to be, we should do it on our own,” he told Re:Set. “We need to be our own leader[s] for the future.”

Shah battled depression and questioned himself for several years. However, he continued networking which helped him cope. “My wife and I have ventured into this [business] and this gives me [motivation to] get up in the morning and go for the goals that I have in my life, keep on renewing them…and meeting new people.”

Look Who’s Listening: Meet the Voices Behind the Distress Helplines
The Re:Set Guide to Creating a Suicide Prevention Policy in School