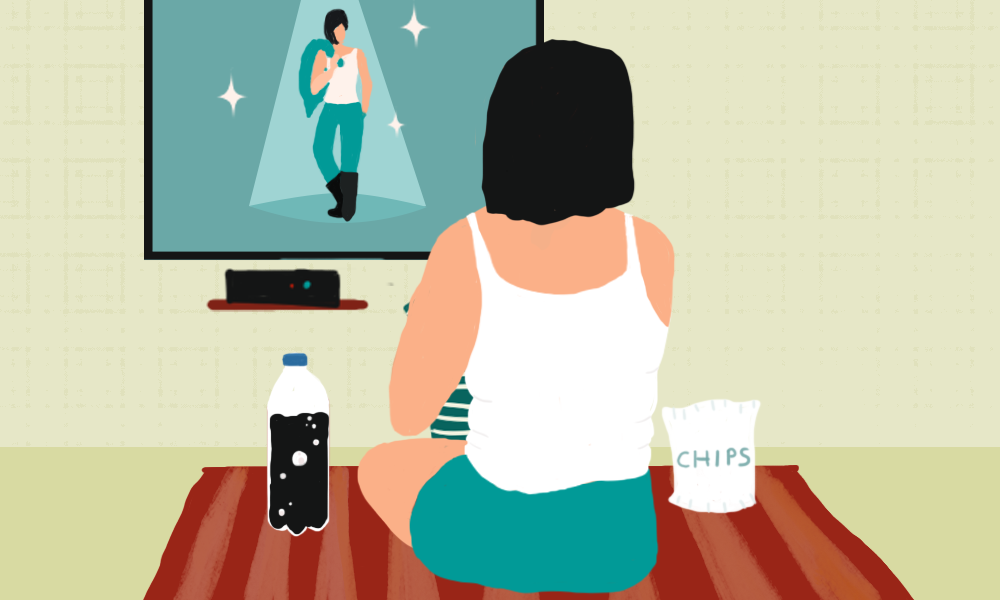 "The irony was that I could then watch myself on television looking fit, while in reality, I had gained about five kilograms." Illustration by (c) Reset Fest Inc, Canada

Editor’s note: In the days following the death by suicide of English TV personality, Caroline Flack, there has been renewed debate on the state of reality television today and its impact on the participants’ mental health. To understand if and how participating in reality TV can affect someone, we spoke to Shubhada Nishtala, a 23-year-old, who had once found fame on a youth-centric reality show in India. She opens up about her journey and shares her story of being in front of the cameras.

I had watched the show as a kid and had always wanted to be a part of it. It tests the participants’ physical mettle and as a fitness enthusiast, was something I wanted to cross off my bucket list.

Around August 2017, the show announced that they would be auditioning for participants in December. In preparation for it, I ended up working out nearly 42 hours per week every week. The obvious result of overexercising is considerable weight loss. I thought it was a good thing because I had built so much muscle mass, my clothes fit me better and people were complimenting me. This rigorous routine paid off when I got selected for the show.

Once I was picked to be on the show, I quit my job to prepare for it. From August 2017 till February 2018, I kept up this 42-hour workout routine and never ate ice cream or allowed myself a slice of pizza. Controlling one’s diet to such extremes is an eating disorder called orthorexia. It made me cranky and I stopped talking to people to avoid distractions and focus on preparing for the show.

23-year-old Shubada Nishtala worked out 42 hours a week for three months to prepare for the reality show she participated in. Photo courtesy: Yeashu Yuvraj

Before leaving to shoot for the show, I was at my fittest. But once I got there, it all came to a grinding halt. On shoot, participants are expected to live on the show’s time. There was no equipment to work out with and we would eat the food that we were given. Our phones, gadgets and watches were taken away from us and for those 30 days, our lives simply revolved around the show and the other participants. But of course, every other day, someone got eliminated. It was a lot of stress as we didn’t have anything to distract us from it all. No music or any other forms of entertainment. I resorted to stress eating to cope. Moreover, it was a volatile environment with everybody squabbling around you. This forced me to find my support system in certain people on the show and [one of these relationships] slowly took the form of a romantic connection.

Our phones, gadgets and watches were taken away from us and our lives simply revolved around the show and the other participants.

All of this was, of course, very different from real life. After 30 days on the show, I was eliminated. I had gained weight and the clothes I had bought mere months earlier wouldn’t fit me. Although I told myself that I could get back in the fitness game, it wasn’t possible as I had lost my strength and stamina. The guy I had connected with on set grew distant. To add to all that, my family had to suddenly move from our home in Ghaziabad, where I had lived all my life. I didn’t get the chance to say goodbye to my friends, and headed to a new city after the gruelling shoot. As a result, I started stress eating even more.

The irony was that I could then watch myself on television looking fit, while in reality, I had gained about five kilograms. Around that time, the guy got back in touch with me, and said that I didn’t look good now that I had gained weight. In a bid to win him back, I resorted to making myself throw up after eating. This is when I realized that I might be bulimic. My voice has changed as a result of throwing up so many times as it brings up an acid reflux and it burns your [food pipe lining].

Also read: Why I Hate Valentine’s Day as a Woman With Disability

The season was on air for only six months. Obviously, a lot of the footage is edited out. By the time I was on the show, it had been running for over ten seasons, and the production team had a good sense of what works with the audience and what doesn’t. They begin editing only after the shooting is entirely wrapped up and they know who the winner is. They create a storyline to favour the winner, focusing on their glory moments, making the rest of us look like the supporting cast.

Then of course, the audience will always weigh in. They will leave you hate comments on social media or create fan pages, depending on how you are portrayed in the final cut. For example, a bunch of teenagers once created a fan page for me and dug up old photographs of mine from a school friend’s social media account. Then they would message me asking me to follow them or share their updates online. When I didn’t, they got upset. My life was essentially not the same after we wrapped up the show as I had these issues disrupting my routine. After the show, I felt like my personality was reduced to this person who had done the show and nothing more.

“I felt like my personality was reduced to this person who had done the show and nothing more.” Photo courtesy: Tamanpreet Kaur

While it’s not scripted in the strictest sense where we are reading out lines given to us, reality TV is undoubtedly manufactured television. The producers pick their favourites as early as during the auditions and hope to take them forward by promoting them on the network’s other shows.

It’s only when you come out into the real world that you realize how the editing team has decided to portray you, your persona and your journey on TV, leaving you vulnerable.

As told to Tejaswi Subramanian

All Work and No Play? Why Schools Around the World Are Cutting Back on Homework
The Re:Set Guide to Supporting Someone with a Chronic Illness