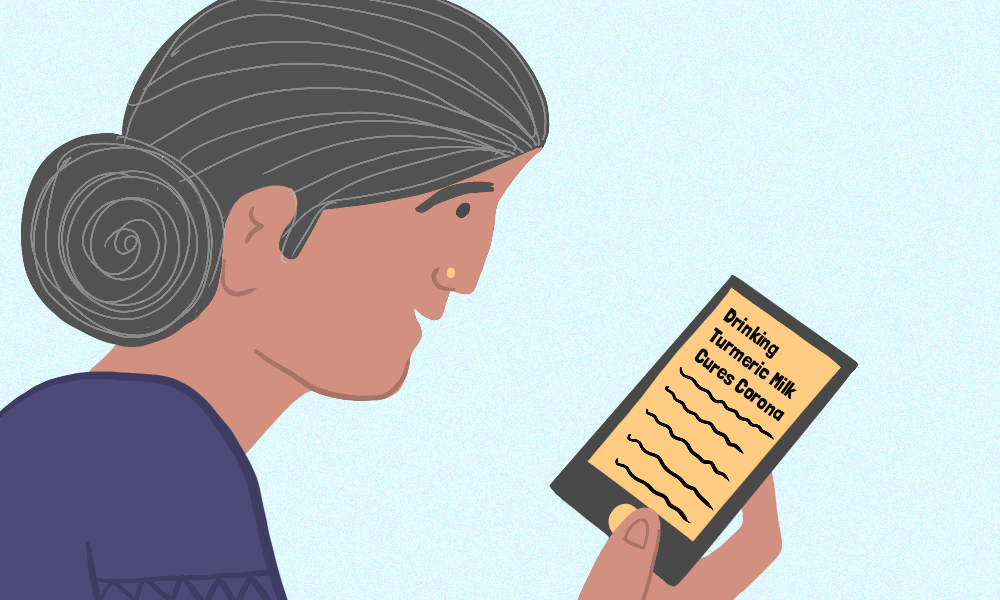 “We don’t question authority, and these messages, especially when coming from people around us, seem trustworthy.” Illustration by (c) Reset Fest Inc, Canada

Just over an hour after the Indian Prime Minister’s request for Indians to light candles in the war against COVID-19, elders flooded our extended-family group with messages. The most common one read, “Coronaviruses don’t survive in hot temperature, as per research by NASA. If 130 [billion] candles are lit together, temperature will increase by 9 degrees as per an IIT professor. So corona will die at 9:09 pm.”

According to Vivek Surendran, Fact Check Editor at Times [of India] Fact Check, this one was a textbook example of deceptive misinformation being shared by India’s older population. “Adding words like, science, NASA, naming a scientist, creates credibility, which enables people to then share these messages. No one verifies if it is true or not.”

“In my experience,” Surendran continued, “normal office goers between 28 and 50, and especially elders above 60 are sharing the most fake news about coronavirus. They have blind trust in all information that comes on WhatsApp. They don’t know about even forms of verification like Google search.

Without verification, such messages are forwarded on social media en masse, where incredulously, people start believing them. At a temple in Mumbai, for example, people used gomutra [cow urine] instead of hand sanitizers for disinfecting thronging crowds. Also, demand for raw turmeric is exploding inside and outside India, because of messages claiming it cures coronavirus. [Editor’s note: it does not]

“Adding words like, ‘science,’ NASA, naming a scientist, creates credibility. No one verifies if it is true or not.” Illustration by (c) Reset Fest Inc, Canada

According to SnehaJanaki Ramesh, a Mumbai-based counseling psychologist, sharing these forwards is essentially a form of self-preservation. “They create an illusion of control, which regulates the anxiety and fear people are feeling. With regards to COVID-19, it’s happening with the elderly, as they’re the most vulnerable group.”


Elder people sharing misinformation about COVID-19 is not new, but it’s started to have a dangerous impact. Numerous messages, from DIY COVID-19 testing kits to advisories for washing of clothes every nine hours, have been doing the rounds for weeks. India’s Supreme Court believes these and others have aided the panic which has resulted in the mass migration of the country’s poor population since the introduction of a nationwide lockdown. The court has asked the central government to set up a portal for dissemination of real time information on the pandemic. Facebook has since introduced a chatbot and a news hub in the country for debunking fake news.


“We don’t question authority, and when coming from people around us, these messages seem trustworthy.”

“People react in two ways when a disaster strikes,” Gayatri Sapru, a social anthropology consultant, told Re:Set. “One is they open their mind to the world, believe that we’re all one family, and everyone’s health is important. And the second is the strengthening of ethnocentrism, that we should’ve always stuck to our roots, and should protect ‘our kind.’”

India has reacted to COVID-19 the second way. It then has affected the way we respond to fake news, like believing Indians have strong immunity to coronavirus because we don’t have a varied animal-based diet like the Chinese. This then leads to racism on the ground under the garb of protectionism.

“The ethnocentrism then gives them a further push towards news and cures that may not be validated, but carry a strong sense of Indianness, and therefore [perceived] to be better than what is available out there,” Sapru said.