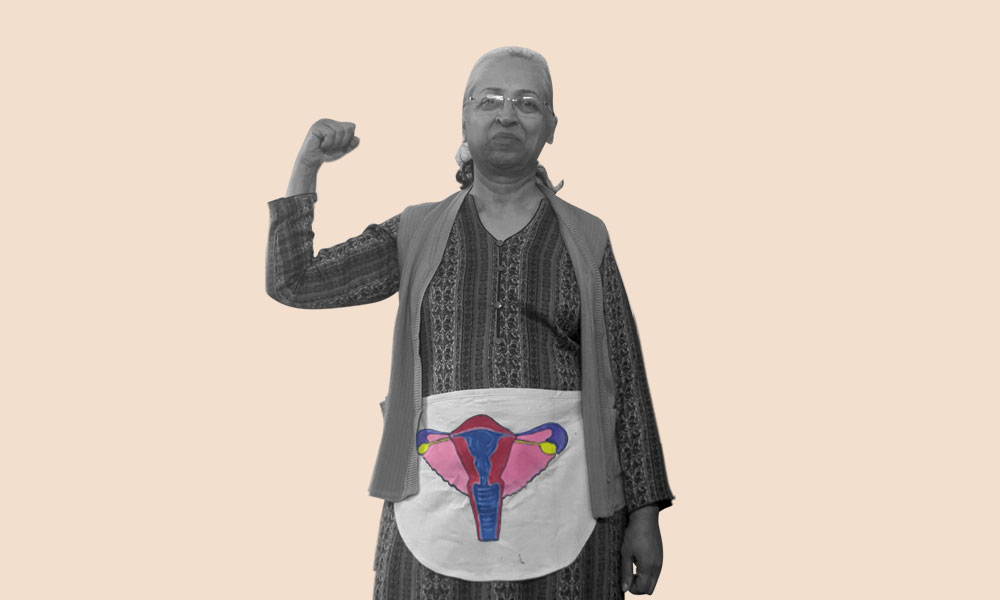 “You can’t even see your vagina and clitoris, so how will you speak about it with slum kids?” Photos: (c) Reset Fest Inc, Canada

“I was blown away by reading western literature on how a garment can construct a woman or a man, and the salwar kameez is the only garment in the world that covers you head to ankle, while also providing complete freedom,” Dr. Preeti Kapur told Re:Set, while demonstrating her point by shuffling quickly to a cross-legged posture.

Kapur, an associate professor of psychology in Delhi University’s Daulat Ram College (DRC), was a spry 48 when she decided to get a doctorate after encouragement from her children. After being pushed in the direction by her mentor, one of the topics to her thesis she added was, ‘the Deconstruction of the Salwar Kameez,’ a type of suit, worn especially by Asian women, with loose trousers and a long shirt.

“If you want to work on a farm, you want to milk a cow, it helps with everything. Necklines can go down, hem lines can go up, but the salwaar kameez has never gone out of fashion because a ‘good girl’ wears a salwar kameez,” Kapur explained. “A pantsuit covers a woman the same way, but the bosom and butt feel different when you walk wearing them against a salwar kameez. In any Asian home, the dupatta is always an object close to the door, as when the doorbell rings, one can quickly pick up her modesty and entertain guests.”

We were sitting in the living room of Kapur’s home in South Delhi. The house has a very wooden, upper class aesthetic to it, though its yellow plastered border and near broken steel gate wouldn’t tell one so. There isn’t anyone at home, for Kapur’s only companion is her perpetually hungry gold Labrador — Daisy. Kapur though, as the kids say it, couldn’t give less of a damn.

“I had to talk to my students about the i-Pill, as they were chugging them like candy.”

In 2011, she taught a paper on community psychology in class. For the practical, her students (DRC is an only girls college) decided to take on the state of washrooms on campus, as used sanitary pads, blocked toilets, were creating a nuisance. Her class started a flier campaign for the need for clean washrooms, where one student repurposed a national newspaper as The Vagina Times and distributed it. Another made a flyer about how to keep pubic hair clean, another pamphlet was about the uterus being projected like a self-cleaning oven. The campaign was a rousing success.

“I became interested in sexual hygiene during the exercise, and realized that the girls needed a safe space to talk about sexual health, hygiene, power dynamics, and contraception,” Kapur recalls. “They didn’t even know that they have three openings. So I told them to go home, close the door, take a small mirror, and ‘feel yourself’.” Kapur then brought other hygiene products like a sanitary cloth and a menstrual cup to class. The girls then did a need assessment, where they asked fellow students three things they wanted to know about sex. From the 400 total responses, many were about contraception. She had to talk to them about the oral contraceptive i-Pill, as “they were chugging i-Pills like candy.”

The sessions worked well, so much so that students started asking more questions: “Sometimes I’m attracted to girls, what does that mean?” “How does one figure out their sexuality?”

For her part, Kapur tried to keep up. “We arranged a workshop where an ex-student of mine who had come out spoke to the girls. We held another on vaginismus,” she remembers. “For things I didn’t know, I was running to my gynecologist for advice. I learned how to obtain information without being intrusive with questions like, ‘Do you have many infections?’ See the more infections a girl has, the likelihood of multiple partners is higher. So without asking, we could get what we need and then give advice.”

Things changed quickly as word got around that she was “teaching girls about bad things” and she had to stop her work in class. This was hardly a roadblock for Kapur.

Born in Ranchi in 1955, Kapur has seen her fair share of hardships. Her father died when she was five, and she was consequently sent to boarding school. Her young mother then had to contend with squabbles about the family business, eventually moving out and living in a small home in Delhi with two young kids at a monthly salary of ₹160 (just over $2 USD). Preeti had returned home aged 13 after begging her mother. “Those were the happiest times because we were together and alone and happy,” she reflects.

At the age of 26 in 1980, Preeti was married to an engineer. He passed away in 2018, but during the time he was alive, her vacations were spent with her two children and her doting father-in-law, as her husband and her mother-in-law, a school principal, were workaholics. “I touched my father-in-law’s feet for the first time and he quickly barked back, ‘Don’t do it after today. If you want to greet me, then hug, but never touch my feet.’ This was revolutionary in the 80s, and my mother-in-law was the same.”

However, in a span of eight years in the 1990s, Preeti lost her father-in-law, sister-in-law’s husband, her aunt, her brother-in-law, and two nephews aged 23 and 26 because of Marfan syndrome. It’s a genetic disorder that affects connective tissue, which is the material between cells of the body that gives the tissues form and strength. “It impacted my children too, who were very young, and they sometimes still feel like they will lose people who they love.”

“I was considered an old maid for getting married at 26.”

Regardless, the close knit family soldiered on. Kapur’s daughter became one of the youngest vice presidents at an investment bank, and her son is a biochemist in the United States. And when Kapur couldn’t continue fact-checking centuries-old misinformation in class, she resiliently decided to look outwards, and the NGOs were welcoming.

First was Khushi, where she would speak for four to six hours with 30-40 girls of similar age groups. As her commitments increased, she would do workshops after class, and during the summer breaks. She also got her students to help, where they’d go get information from their help and the help’s children at home. “This gave us more data to refine our modules, increase specificity in approach while understanding the myths that are prevalent. We added a sexual harassment module after realizing that the problem was much bigger than talked about.”

She developed different modules on anatomy, contraception, and sexuality, all of which came organically in discussions. Eventually, the modules increased to seven, including good touch, bad touch for young girls, and hygiene.

“We can’t think of our work in terms of years, we have to think of progress as generational”

At this point during our conversation, Kapur got up from her chair, lifted up her kurta, and explained the process of cleaning oneself properly, adding that most young girls are taught to go from back to front, which brings feces near the vaginal area. The trick, she explains, is understanding the vagina is a self-cleaning organ, so one mustn’t use soap on the inside. She then made a cup of coffee for us. She loves coffee.

As she nears retirement — Kapur will retire this month after 43 years in DRC —  she has taken up more mentoring roles. She’s worked with five PhD students, completed 20 projects with graduates and postgraduates, and is now shaping four non-profits. They have founders younger or near 30 and work in the fields like mental health, hygiene and skill development. Her home acts as a quasi-incubator for them, where they have their weekly meetings, get financial support, and even help from her late husband’s friend for business development.

“The one thing that bothers me is how slow the progress is in terms of societal change. We can’t think of our work in terms of years, we have to think of progress as generational,” she told Re:Set. “The only way forward is to keep going.”

With Schools Shut, Indian Families From Hong Kong are Returning to India Because of Coronavirus
Parents and Kids Are Unhappy About the Coronavirus-Caused ‘Vacation’