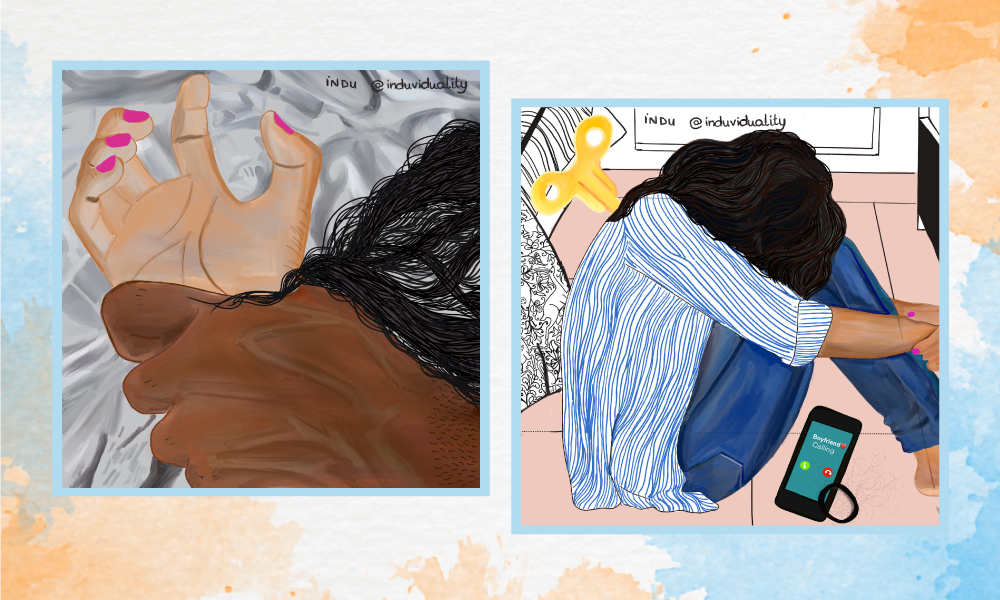 For nearly two months, Indu Harikumar’s email was filled with stories from Indian women sharing the secrets they often hid from the world. From instances where their partners threatened to leak their nudes to having their online presence strictly surveilled, women of different ages opened up about their often painful personal experiences. A Mumbai-based artist and writer, Harikumar then turned these tales into gripping artwork and words for her audience to document the ways in which patriarchy can manifest control over women’s lives.

With a background in children’s literature, the 40-year-old turned her focus to “people-powered art projects” where she curates and captures stories from her audience. Most of the ideas that drive her current work come from her own life which she eventually juxtaposes with the experiences of others. From tackling tough topics like gender dysphoria to sexuality, Harikumar’s brush and pen tell tales that many others may shy away from.

The inspiration for Harikumar’s projects sometimes stem from her own experiences. Photo courtesy: Chaitali Mitra

Her latest initiative titled “#LoveSexandTech” aims to tell stories that don’t often find space in mainstream narrative such as instances where women have been forced to give up their passwords and privacy to experiences of physical and emotional abuse.

We caught up with Harikumar to learn more about the driving force behind her latest work and how she navigates such sensitive territories.

What was the inspiration behind #LoveSexandTech?

I [wanted] to look at how women’s spaces shrink because of gender-based violence. All the spaces that they occupy online are controlled by the outside world, the state, there is also someone at home, not just parental units but also with partners [who] control.

It came from a deeply personal space. I’m someone who has experienced violence, it is something that makes you feel like you don’t belong. The idea was to create space for solidarity for people to talk about [their experiences of abuse and violence] without shame.

What is your aim for this project?

#LoveSexandTech became a safe space for women to open up about their experiences and for men to reflect on their actions. Photos courtesy: Indu Harikumar

How do you go about collecting stories for this?

On Instagram, I use features [like AMA] because [to collect and share stories as] there is some kind of distance. I tell people [not to] DM me these stories [directly] because it’s too close and it makes me uncomfortable.

It’s difficult for me to decide which question is triggering because I don’t see their faces.

When it comes to stories, what people talk about is usually chronological or the way they remember the incident. Sometimes they won’t talk about how they resolved something or if there has been a violation of privacy. I write back to them asking them more questions. This is something I struggle a lot with because it’s someone else’s trauma and here I’m probing them.

It’s difficult for me to decide which question is triggering because I don’t see their faces. There’s no tone. [After creating the related artwork], I run the illustrations by them. I will ask them to label their own trauma [with trigger warnings like physical or sexual violence] because I feel that it’s not right for me to be labeling anyone else’s trauma.

Given your experience with violence, has this been emotionally difficult for you? How do you deal with the triggers associated with it?

I’ve worked on myself for a long time, I also look at the violence that I faced objectively. What is difficult for me is talking to other people. Writing back to them, that’s extremely scary for me. That someone else’s trauma, I feel like I’m asking questions like some police officer, it makes me very uneasy. Some of the stories are just horrific, but not triggering personally.

How does it feel to become a safekeeper for so many women’s secrets?

I think that humans need validation in different ways. I’ve realized after doing this for almost five years that there is no validation bigger than trust. People write to me saying how what I do or a particular story has really helped them. To have this space, I feel incredibly lucky. There are times when it’s difficult, I’ve learned to create boundaries of what is acceptable.

What would you say is the impact of this project thus far?

There was someone who wrote to me yesterday saying that it has helped him reflect and introspect on some of the things that he’s been doing. Someone else told me…that this made them feel less alone.

One of the things I’ve heard from people is that after reliving their experience, though it may have been difficult for them, they feel they feel relieved, it’s cathartic for people.

Lift ‘Em Up: Supporting the Next Generation of Female Leaders
Mind Your Language: How Words Can Impact Your Child