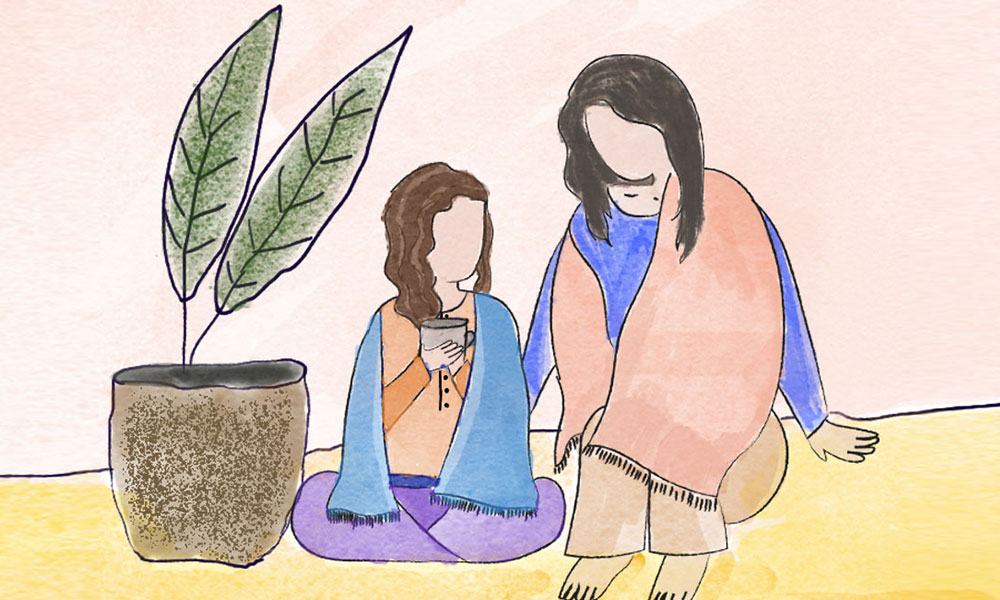 Editor’s Note: Crisis helplines are a prominent tool in the mental healthcare and suicide prevention infrastructure today. World over, people use or refer these helplines to those in need, and seek help from kind, empathetic strangers. They share their stories, emotions, and vulnerabilities over a call or chat, so as to feel heard, understood, and accepted. In that moment, it is helpful and nudges them towards healing. But have you ever wondered who sits on the other side of the line? Who are they? Why do they do what they do? How do they know how to do it? Are they trained? How do they feel about answering these calls and having these conversations?

We dive into the world of distress helplines and uncover these faces and their stories.

Sandip (last name withheld on request), a volunteer at Distress Centres of Greater Toronto, a crisis helpline, had one of his most cathartic experiences while speaking to an elderly gentleman a few months ago. The latter had just gone through a painful divorce and was accused of domestic abuse, leaving him disturbed and suicidal. Sandip patiently listened to the caller, allowing him to vent. “[He] was extremely upset and really on the brink of suicide,” Sandip told Re:Set. “I stayed with him on the phone for…close to an hour.” By the end of the call, the gentleman decided he was going to get help instead of going through with his earlier decision. “[Such incidents] have happened several times over the years,” Sandip reflected. “I think [there are] positive experiences to take back, to know that you made a difference in somebody’s life.”

For a lot of people, it’s as simple as reaching out to someone who’s willing to pay attention.

However, sometimes, when it comes to helplines, it’s impossible to salvage a tough situation. Joey, 34, (name changed), a volunteer at Toronto Rape Crisis Centre, had a particularly difficult call where the caller was close to taking her life because she felt it would be easier than dealing with the situation she was in. Joey listened to her vent and encouraged her to consider other options such as seeking help from a shelter, turning to food banks and more. “We’re supposed to let the caller lead the call,” Joey explained. According to her, for a lot of people, it’s as simple as reaching out to someone who’s willing to pay attention. “‘I just want someone to listen to me,’” she said, explaining how a lot of callers really feel. “‘I just want empathy and validation. I want to make sure I’m not crazy.’”

Unfortunately, Joey is unaware about what transpired post the call. Volunteers at her centre are asked not to follow up and encourage callers to reach out again or contact alternative support resources. “I actually don’t know what happened to her,” Joey told Re:Set. “I’ll never know.”

The training process is often arduous and involves communication drills. Joey was encouraged to experiment with role-play exercises and required to answer two calls on the line under supervision of staff members while undergoing training for six days. “The training definitely was very intense,” Joey said. “We talked about trauma, intersectionality, boundaries in addition to being provided with practical knowledge about local resources.”

Contrary to what most people think, many callers are not necessarily about to take their own lives.

For Sandip, training involved focusing on communication and listening techniques which made him examine his relationships in his personal life as well. He participated in two preliminary interviews before undergoing training for nearly six weeks where he was taught how to respond to someone who needs support and underwent mock calls to prepare. Sandip also answered calls on the helpline while another volunteer listened in to gauge his responses. “In terms of my ability to support people, I’ve learned a lot,” he said. “Our training really did emphasize asking people if they’re thinking about suicide.”

Some calls are really tough and escalation techniques exist to help volunteers deal with a tricky situation on the line. While Joey has had callers tell her stuff like they have no food to eat which motivated her to look for local soup kitchens, Sandip has directed emergency services to a caller in acute crisis. Their diverse experiences have shaped their perspectives and transformed them. However, sometimes, despite their best efforts, they feel helpless. “I’ve had a few calls where I genuinely didn’t know what to do,” Joey said. “There have been a lot of cases where I wish I could do more.”

Volunteers often receive repeat calls from people who turn to distress helplines as a coping mechanism.

Contrary to what most people think, many callers are not necessarily about to take their own lives.“It’s really…a service for anybody who’s experiencing mental health distress in any way,” Sandip said. “Even if you have ideation, you’re contemplating [suicide] and not really sure where to turn, you can call the line.” He added that lots of callers are repeat callers and simply turn to the hotline as a coping mechanism. There are also those who are simply unsure and need a listening ear. The helpline welcomes all kinds of callers including those who’ve simply had a bad day at work and need to release their pent-up frustration, Sandip said.

While different kinds of hotlines are available to callers in need of help, misconceptions still persist. Not all volunteers at suicide helplines or distress centres are mental health professionals, for instance. Both Sandeep and Joey have full-time jobs that are unrelated to mental health. However, they have research experience in the field and have been trained to recognize techniques that help callers in distress feel a little less alone and validated.

Also read: To the Brink and Back: Survivors Share Their Stories of Suicidal Ideation

Working at a helpline, however, can be exhausting for volunteers. Sandip and Joey think it’s essential to find ways to disconnect after work shifts that can last from three to eight hours. “It [volunteering] has had a profound time on my social life and my life in general,” Joey said. “In terms of my mental health, some of the stuff that I hear is very disturbing. It is really hard.” She consciously makes an effort to focus on things that comfort her including eating delicious food or unwinding with a hot cup of coffee.

Sandip’s experiences have made him overcome his own reservations in terms of talking about how he feels. He consciously speaks about things that bother him now and knows it’s an incredible learning opportunity. He now recognizes his limitations. “I think the key is to kind of understand that…you’re not always going to change the person’s insight on life or…work with the person to develop a safety plan,” he said. “But as long as you…keep them engaged and make sure they’re aware that the service is always there for them, that they could always call back.”

Comparing Notes: People Tell Us What They’re Talking About in Therapy
Reflections from People of Determination on Mental Health, Disabilities and Healing

Look Who’s Listening: Meet the Voices Behind the Distress Helplines