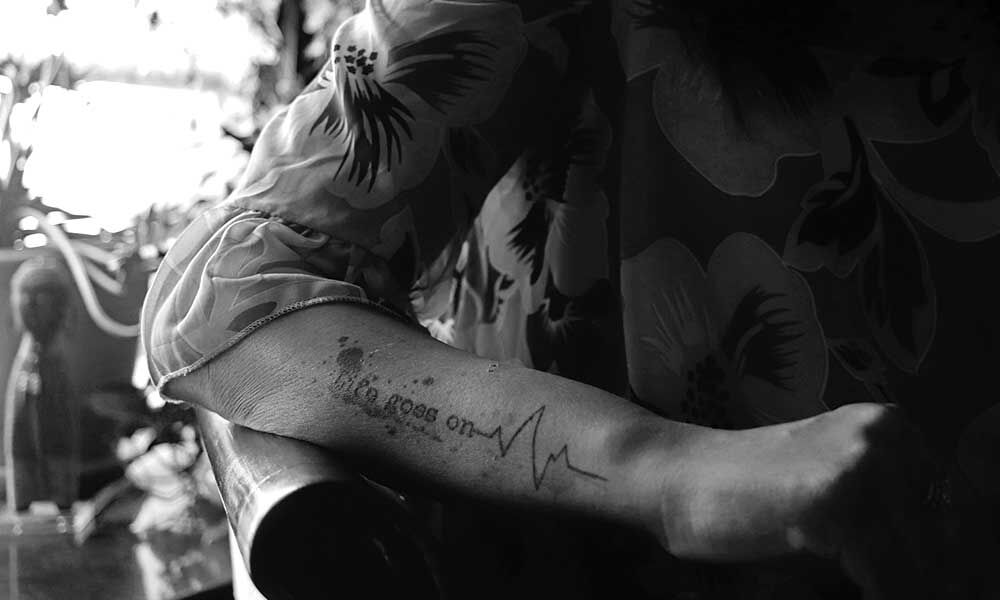 For many individuals, tattoos are not just works of art but also a source of strength. (c) Reset Fest Inc, Canada.

Looking back at Indian history, there are numerous tales of ancient tribes who sported tattoos to mark their faith. Whether it’s the Apatanis of Arunachal Pradesh, the Rabari women of Rann of Kutch or the Toda tribe of South India, tattoos have been pivotal aspects of indigenous cultures in India. Back in the day, tattoos were a part of the tradition as identity markers, permanent ornaments emblazoned on one’s skin.

The history of body art however, has undergone a dynamic journey in contemporary India with tattoos becoming almost a personal diary for people — a way to permanently archive their experiences and celebrate the courage that let them overcome life-altering challenges.

“The occurrences in people’s lives, which are beyond their expression in words or language, is showcased by them using their bodies, which often makes tattoos a mode of [overcoming] hurdles and depression,” Shyamoshree Chatterjee, a 42-year-old therapist and high school psychology teacher, told Re:Set.

We asked six people living in Mumbai, India to share the stories linked to their tattoos.

For 20-year-old editor Rohitendra Chatterjee (no relation to Shyamoshree), his life’s motto is ‘Greatness from small beginnings,’ which outlines his first tattoo — the great white shark, the steering of a ship and an anchor. “Right from my school days, I would feel like an underdog with social anxiety being a huge part of my life,” Rohitendra told Re:Set. “Since then, I have been fascinated by the idea of a shark. Sharks are smart, logical decision-makers and always stay in the background, never running the show. They attack only when a need arises.” A passionate graphic artist, Rohitendra has always wanted to steer his own fate and the tattoo has helped him reconcile with his past self. When asked how his body art makes him feel, he grinned, “It’s a message for other people now — never forget the guy in the corner of the library!”

Rohitendra’s shark tattoo helped him reconcile with his past self. (c) Reset Fest Inc, Canada.

Unresolved and undiagnosed mental health challenges which can stem from childhood trauma including peer pressure, familial relationships, and bullying often leave an immense impact on an adult. Body art can play a role in coping with and unpacking those challenges. “I have seen this particularly in my students who have piercings and tattoos — they seemed to adorn their bodies, especially in times when they couldn’t achieve a goal in their lives, which makes the body art a means of hope and not an act of impulse,” Shyamoshree said.

They seemed to adorn their bodies, especially in times when they couldn’t achieve a goal in their lives.

But how does the needle function as a painful, yet cathartic form of alternative therapy? “While a lot of people are afraid of the pain that comes with the process of tattooing….the pain caused to you [while getting inked], often adds up to your identity which makes a clear statement — ‘I am not weak!’” he explained.

Anju Chakraborty, a 51-year-old homemaker, gifted herself a tattoo after years of being scared of getting inked and not trusting anyone with doing justice to her vision. Her trash-polka style tattoo was checked off from a list of 50 things to do when she was about to turn 50. Her tattoo reads, ‘Life Goes On.’ “After going through impactful changes in my life — the demise of my husband and my father’s battle with cancer — I realized nothing in life ever stops. You feel that the world is stopping for you, but in reality, everything always goes on,” Chakraborty reflected. “So now, when I look at my arm, I am reminded of the heartbreak life had caused me but how it also helped me learn so much. I always feel humbled and positive.”

For the body art enthusiasts we spoke to, design inspirations are often considered cosmic clues, almost as if they were destined to chance upon them. 24-year-old Siddhant Sharma, a popular Indian rock vocalist has explored the depths of Japanese traditional art and infused it with iconic fictional characters such as the Hannya mask from Japan and the iconic Joker from Batman. “All my tattoos are collectibles to me and I revel in their permanence. The Hannya is considered the mask of jealousy, but few know that it keeps negativity away, while the Joker is my favourite villain, someone who is perhaps more important than the protagonist,” Sharma told Re:Set. “Being misunderstood all my life, I was weighed down by public opinion, so much that I had to break free with my music. Even then, the fact that I play rock-and-roll, which is loud, led to misconceptions about the person I am. Dealing with generalized opinions is harsh, especially for young people like us. Therefore, [my tattoos are] my ode to two characters who conceptualize the duality in people, the possibility of good in everyone.”

Fiction and folklore find a special place in the hearts of tattoo enthusiasts like 27-year-old Sankalan (he asked us not to use his last name to protect his privacy), an empath who always felt intrigued by the idea of werewolves. “Growing up reading folktales as a child, I realized my fascination for these mystical creatures. What I find extraordinary is that werewolves are left to deal with their curse of the moon, which drew me to them,” he told Re:Set. “When I was going through a crucial juncture of my life, bogged down by applications in various colleges, I decided to get my first tattoo,” he reminisced. “As a college dropout, now when I look at it, and think of all the right decisions I made henceforth, the tattoo lends me a lot of confidence for the years to come. It is an inseparable part of me,” beamed the young music teacher.

For tattoo artists who spend hours with each client, conceptualizing and patiently understanding their stories while interpreting them through design that is to last them a lifetime, is far from simply an artistic endeavour. Extensively researching the places and concepts for the final design is a key part of the process for Anirban Roychoudhury, a 28-year-old tattoo artist.

“We keep observing how one describes and depicts the sentiment attached to a person, place, situation or frame of mind, often picking up on body language to design better,” Roychoudhury told Re:Set.

While Sankalan’s tattoo was admired by his friends and family and became a subject of conversation, the misconceptions around tattoos can sometimes be frowned upon and carry stigma in parts of India. “Coming from a conservative Indian family, tattoos were a big no-no in my household,” 27-year-old scriptwriter Sreoshi Bakshi told Re:Set. “But it’s when I was going through an emotionally tumultuous period of depression, physically recovering from a severe liver condition, [that’s] when my love for writing resurfaced,” she poignantly smiled. The inked quill rests gracefully across the sides of her left forearm as she speaks of her passion for the craft of writing. “It’s also a convenient reminder that I must write constantly and not procrastinate,” Bakshi giggled.

Coming from a conservative Indian family, tattoos were a big no-no in my household

23-year-old trichologist, Paula echoed the sentiments of transitional chaos in her life as her intricate tattoo ‘Flower of Life,’ a work-in-progress, looks confident on her arms. “Of the many dark phases of my life, the most distinct was moving to Mumbai and encountering betrayal from people I had called dear friends. That’s when I got myself inked as a lasting memory of this phase,” Paula said. “My life has always been about living on the edge but after getting inked, I found myself seeking the right balance. Being yourself is rather difficult and getting a tattoo is a very significant step towards accepting your life and what you stand for.” While the elements of her design embody the cyclical nature of her life, the young meditation practitioner strongly believes that “the whole purpose behind a tattoo is for you to live up to what you have inked, so when you look at it, don’t just recall memories. Respect your effort towards permanence on your skin, and follow what your tattoo suggests.”

Like in Chakraborty’s case, getting a tattoo can help a person honour who they’ve lost. Karan Panthaky, 36, an entrepreneur based in Mumbai has a beautiful, thought-provoking tattoo of his beloved dog, Puff on his arm. Puff passed away in November 2017. On a sunny day two weeks later, Panthaky set out to get inked. “I remember feeling excited about it,” he mused. “I wanted the entire world to see it [his tattoo] and ask me about it.” His equation with Puff was easy-going and effortless: every time Panthaky came home, he’d be greeted by his four-legged friend who would then proceed to follow him around the house. “I think everyone who has a dog would say they have the best dog but there was literally no one like Puff,” Panthaky said. He remembers his gentle nature and kindness the most and how he helped many of his friends get over their fear of dogs.

After Puff’s health suddenly started deteriorating, the family had to make a tough call and put him down to ease his suffering. “A week after that [incident], I’d wake up from my sleep, howling, in tears and it was basically as if my brain was refusing to accept he was not with me anymore…I don’t think I’ve been the same since,” Panthaky reflected. “I think this tattoo has helped me deal with my loss. It nearly ten hours to finish and Panthaky did it in one sitting with small breaks. “I wanted to make sure his eyes looked like they [still] have life in them. It’s [the process is] pretty painful…by the fourth hour, I couldn’t feel my hand; it was completely numb,” he said. Panthaky thinks the physical pain was a way for him to cope with his loss and process his internal turmoil.

For many individuals, tattoos are works of art and a source of strength. They send out a message, loud and clear: life’s ups and downs are temporary but the stories we get from them are infinitely enriching. These tattoos are a form of self-expression that stay with us.

“There is, of course, the relationship between mental health and almost everything. Tattoos especially are reminders, a direction, a way to hold onto something that is or was pure,” Roychoudhury reflected. “These are the stories of transformations, learning and unlearning about one’s identity and above all, a journey of acceptance.”

In a world where happiness is a choice to be made at every waking hour, a tattoo is an immortal depiction of that choice.

‘Darkest Time of My Life:’ Indian Patients on How Medicines Impacted Their Mental Health
How You Can Prioritize Your Well-Being This Festive Season