How Some Indian Schools Are Teaching Parents About Gender Equality 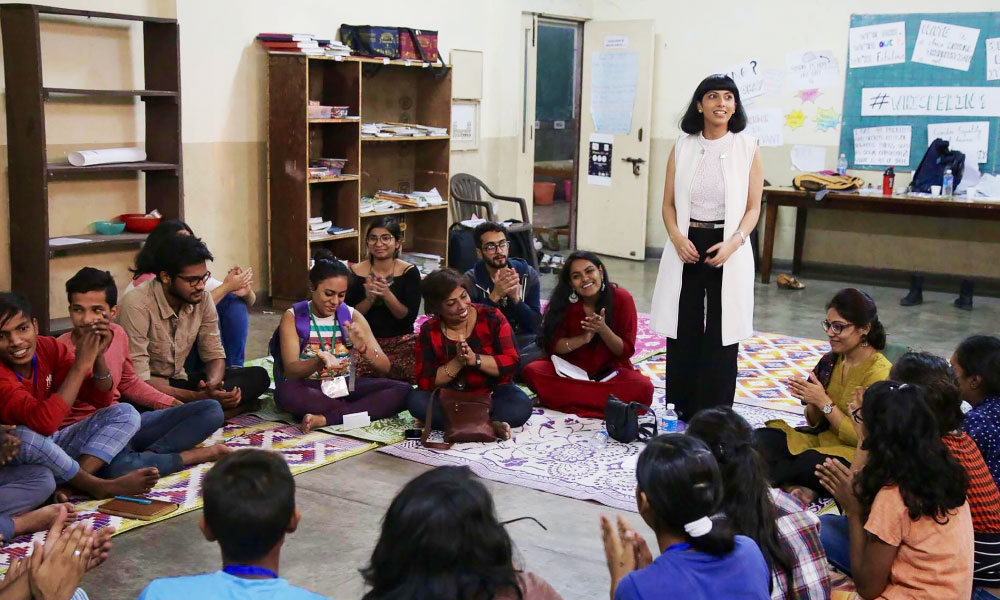 “Wanting girls to be equal to boys is an incorrect ideal to strive for. We have placed boys on a pedestal, saying that they have mobility, access to resources and power,” Divya Dureja, a counseling psychologist told Re:Set. “Firstly, we haven’t questioned that pedestalization. So now, we’re asking girls to climb up to it, despite questioning everything that is wrong with it, like, ‘manning up.’ Why should girls be asked to lose their sensitivity to become like this, just because society sees that as a higher ideal?”

India has incredible gender inequality in every aspect of civic life, but it is especially evident in terms of educational and economic opportunities. According to the World Bank’s Gender Statistics database, Indian girls stay in schools for less time than boys. They finish secondary school at a much lower rate than boys. Women are granted fewer loans from financial institutions, and they’re employed more in agriculture than in other industries. Sensitizing parents about equal treatment of children, regardless of their gender, then becomes imperative to ensure the girl child’s social and financial mobility.

Dureja has been running workshops with parents, teachers and kids in New Delhi schools and colleges about gender sensitization, equality and sexuality for four years now. According to her, the work has to begin early and at home, as a child’s understanding of themselves, love, security, and acceptance develops between their birth and puberty. Parents play a key role as they are their primary caregivers; if the parents and caretakers are misguided, those notions are passed onto the child. “It takes years of unlearning those behaviours. If not addressed properly, it creates a catastrophic loop of cognitive distortions,” she said.

Dureja uses practical methods to reach out to parents in her workshops. In one, she sketches a small baby on a piece of paper, and asks parents, “What are the good characteristics of this child?” Usually they respond with platitudes like “obedient, hardworking and honest.” She then asks them how they would deal if the child doesn’t adhere to the gender they have ascribed to them at birth? If the child identifies to the LGBTQIA+ community?

Dureja has been running workshops with parents, teachers and kids in New Delhi schools and colleges about gender sensitization, equality and sexuality.

“I ask them how would you feel [when confronted with the pressures of college, if it were your first day on university campus]? I make them walk around the room [enacting this scenario]. Once they’ve had that experience, they become empathetic. Lectures don’t work,” she reflected. “What works most effectively is creating empathy using visual and physical means by making them step into their children’s lived experience.”

Recreating this lived experience makes the parent understand their child’s predicament, and confusion, but it’s also, in one way, like preaching to the choir, as according to Dureja, those parents willing to come to these workshops, are coming with an open mind to having these conversations. The participation, according to everyone Re:Set spoke with, is highest when aided by teachers.

“What works most effectively is creating empathy using visual and physical means by making them step into their children’s lived experience.”

For Akshat Singhal of The Gender Lab, this is especially difficult with fathers. Singhal and his team work with over 150 low-income schools and villages in New Delhi, Mumbai and Haryana, using various programs and workshops to empower and enable young female students. They also try to work with toxic masculinity issues in boys, but doing that has proven difficult.

“Whenever we organize parents’ meetings in schools, most of the time only mothers turn up,” Singhal told Re:Set. “So we started organizing workshops specific to fathers, but that in itself has been a tough thing because fathers would not always come, citing various reasons like being the sole breadwinner [of the house], and not seeing [their child’s schooling] as priority.”

The workshops with fathers are important because several studies have charted the impact of a father’s masculinity on their son’s outlook toward society and their place in it. Toxic fatherhood remains an under-discussed subject.

The Gender Labs’ workshops focus on unpacking patterns and ideas of masculinity in paternal behaviour and helping dads be better role models. Their approach, like Dureja’s, was catered towards employing nonviolent communication (NVC) and finding common ground. With fathers, Singhal starts conversations with basic challenges they faced with their sons, and then pivoted to how fathers themselves could be solutions to it. “We explain how their  participation in care-work and spending time with sons is important for their growth and upbringing,” Singhal said.

Parijat Luthra is a training and development programmer based out of Delhi. He helps people prepare for their public extempores, like TedX and JoshTalks. Near the birth of his son three years ago, he took a parenting course, and decided to raise his newborn son, and his then 3-year-old daughter in a gender neutral environment.

“Why do we have to [emphasize on the differences between] two people? The more you do it, especially with kids, the more limited their thinking becomes,” he told Re:Set. “If I tell my daughter that she’s a girl, she will start thinking [in a manner that limits her idea of] herself to what she sees girls do around her in school, in the playground and it’s the same with my son. If I tell either of them that, let’s say, they’re slow, then they’ll never try to run fast.”

Also read: Why are India’s Girls Enrolled In Government Schools and the Boys in Private?

Luthra enforced this post-gender thinking on both his kids recently, when they went on a 15-hour trek in Himachal Pradesh. His son, now seven, said he couldn’t complete the climb because he would get tired, and while his 10-year-old daughter, said she couldn’t because she didn’t think herself to be athletic. His response to both: Work as hard as you can, and then we’ll figure.

Luthra learnt to inculcate this behaviour at a parental coaching platform called Parwarish. Like Dureja and Singhal, Parwarish also works with schools and villages to enforce the same ideals of gender equality. A key missing accelerant in this quest though, is government policy. India also slipped to 112 on the latest World Economic Forum’s Global Gender Gap Index, behind neighbours China, Sri Lanka, Nepal and Bangladesh. This is four places worse than last time.

India has several programs for increasing enrolment of girls in schools, but none focused on societal inequality. According to Singhal, attitudinal change needs to come from “intensive and intentional reform,” without which the climb towards equality will remain a steep one.

Why are India’s Girls Being Enrolled In Government Schools and the Boys in Private?
All Work and No Play? Why Schools Around the World Are Cutting Back on Homework